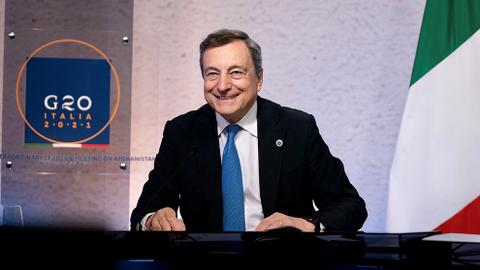 European Commission chief von der Leyen announces short-term aid deal to prevent basic services in Afghanistan from collapsing and food from running out as G20 leaders gather to discuss the Afghan crisis and how to engage with its new rulers.

G20 leaders have gathered for a virtual summit focused on addressing the looming humanitarian crisis in Afghanistan, with the EU kicking off proceedings by announcing a $1.2-billion (one-billion-euro) aid package.

The money adds $288.6 million (250 million euros) to a $346.3-million (300-million euro) sum previously announced by the EU for urgent humanitarian needs, with the remainder going to Afghanistan’s neighbouring countries taking in Afghans fleeing the Taliban, a statement said.

The Afghan people should not pay the price of the Taliban’s actions.

Today, we announce a support package worth around €1 billion for the Afghan people and neighbouring countries.

We must do all we can to avert a major humanitarian collapse in Afghanistan.#EUSolidarity

Italian Prime Minister Mario Draghi had been pushing for Tuesday’s G20 meeting since the August takeover by the Taliban, insisting debate over solutions must go beyond the usual club of Western allies.

Draghi stressed that Afghan women’s rights need safeguarding, and leaders must prevent the country from becoming a hotbed for foreign terrorists.

The leaders also reaffirmed the commitment to provide humanitarian assistance directly to the Afghan people through independent international organisations, the White House added.

Meanwhile, Chancellor Angela Merkel said Germany is not yet prepared to recognise the Taliban as Afghanistan’s government since it has not met the inclusiveness standards demanded of it.

However, she did reaffirm Berlin’s promise of $700 million in aid.

The EU statement stressed the funds are “direct support” for Afghans and would be channelled to international organisations working on the ground, not to the Taliban’s interim government which Brussels does not recognise. EU development aid remains frozen.

The Taliban badly need assistance as Afghanistan’s economy is in a parlous state with most aid cut off even as winter nears, food prices rising and unemployment spiking.

EU countries are wary at the prospect of a surge of Afghan asylum-seekers trying to enter the bloc, as happened in 2015 with Syrians fleeing their war.

Brussels’ calculation is that donating money to help stabilise Afghanistan and assist countries between it and Europe could stem any flow.

The G20 includes the United States, EU, China, Turkey, Russia, India and Saudi Arabia among others.

READ MORE: Rural Afghanistan may not get through the winter if help doesn’t arrive

Participated in the G20 Summit on Afghanistan. Stressed on preventing Afghan territory from becoming the source of radicalisation and terrorism.

Also called for urgent and unhindered humanitarian assistance to Afghan citizens and an inclusive administration.

Tuesday’s conference came as the Taliban held their first face-to-face talks with a joint EU-US delegation, as the group continues their diplomatic push for international support.

The direct talks held in Doha were facilitated by Qatar, which has long hosted a Taliban political office.

EU spokeswoman Nabila Massrali said the meeting with the Taliban would “allow the US and European side to address issues” including respect for women’s rights and preventing Afghanistan becoming a haven for “terrorist” groups.

Massrali said the meeting was “an informal exchange” and “does not constitute recognition of the ‘interim government.'”

“We want positive relationships with the whole world,” the Taliban’s acting foreign minister Amir Khan Muttaqi said at an earlier event in Qatar.

“We believe in balanced international relations. We believe such a balanced relationship can save Afghanistan from instability,” said Muttaqi, who led the Taliban delegation Saturday for the first in-person talks with US officials since the American pullout.

Secretary General of the UN @antonioguterres “I am alarmed to see promises made to Afghan women & girls by the Taliban being broken.

I strongly appeal to the Taliban to keep their promises to women and girls & their obligations under international human rights law” #Afghanistan pic.twitter.com/wWNjp3Ozdr

UN chief Antonio Guterres earlier underscored discontent with the Taliban over its treatment of women despite vows it would not repeat its earlier hardline rule.

Afghanistan’s boys were allowed to return to secondary schools three weeks ago, but girls have been told to stay at home along with women teachers in much of the country, though they can attend primary school.

The G20 meeting was also expected to address the issue of security, with Draghi last month calling for measures to “stop Afghanistan from again becoming a hotbed of international terrorism”.

The Taliban regime, still yet to be recognised as a legitimate government by any other country, is itself facing a threat from the Daesh-K terror group, who have launched a series of deadly attacks.