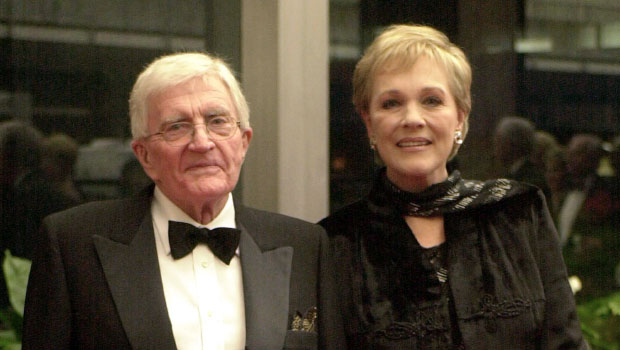 Julie Andrews is a sparkling star of the stage and screen, with a career spanning multiple decades. Below we breakdown her love life, which included marriages to two men, Tony Walton and Blake Edwards,

Julie married British set and costume designer Tony Walton on May 10, 1959 in Weybridge, Surrey. The actress initially met Tony when she was performing in Humpty Dumpty in 1948. Growing up, Julie had often performed with her mother and stepfather, and, at 13, she was the youngest performer to appear at a Royal Variety performance.

After meeting Tony and developing a relationship with him, she walked down the aisle at 24. They share one child, a daughter named Emma, who currently works as a children’s author. Julie welcomed Emma in 1962, right before she shot to stardom with Mary Poppins. Tony notably designed Mary Poppins’ iconic costumes for the flick.

From ‘Mary Poppins’ To ‘The Princess Diaries,’ See All Of Julie Andrews’ Iconic Roles

The couple ultimately divorced in 1968 and Julie went on to marry director Blake Edwards (more on that below). Tony passed away on March 2, 2022. Although the pair wasn’t married for too long, Julie still reflected on their love for PEOPLE after his death. “Tony was my dearest and oldest friend. He taught me to see the world with fresh eyes and his talent was simply monumental. I will miss him more than I can say.”

She added, “We are a huge, blended family and as we hold each other close, we take comfort knowing that he lives on, not only in his children and grandchildren, but in the memories of thousands who cherished his warmth and generosity and the glorious gifts he gave us. Gifts of theatre and film, ballet and opera, the graphic arts and illustration.”

Julie’s second marriage was to director Blake Edwards, a film director, producer, and screenwriter, in 1969. Speaking with Good Morning Britain in a 2015 interview, Julie recalled her meeting Blake actually a decade before they exchanged vows — like “ships that passed in the night at some event.”

Then, they crossed paths yet again, making eye contact at a LA intersection driving opposite directions from the same therapist’s office. “I was going one way and he was going the other,” Julie told the outlet. “He rolled down the window after smiling a couple of times, and he said, ‘Are you going where I just came from?’ … Very corny, sorry about that.”

In addition, in an interview with Diane Sawyer, Julie said she was “afraid” she was “trying very hard not to fall in love with him.” For Blake — the director of classics like Breakfast at Tiffany’s and Pink Panther, their meet-cute was “wonderfully Hollywood.”

At the time of the so-called “meet-cute,” both Julie and Blake were married (Julie to the aforementioned Tony Walton). In 1967, they both divorced their respective spouses and reconnected, going on to date after their divorces were finalized.

Blake and Julie tied the knot at Julie’s home in November 1969 two years after dating each other. They continued to raise their children together (he had two children, Jennifer and Geoffrey from his first marriage to Patricia Walker). They also then adopted two daughters, Amy and Joanna, who were both orphans from Vietnam. Moreover, they lived internationally, with homes in LA, London, and Gstaad in Switzerland.

Blake passed away of pneumonia complications in 2010 at age 88 following a battle with chronic fatigue syndrome.

“Blake was the most charismatic and interesting fellow you could possibly meet,” Andrews recalled during a talk promoting her 2019 memoir Home Work: A Memoir of My Hollywood Years. “He was hilariously funny and had such a dark sense of humor that just put me away, that I loved so much. But he was also, at times, a very depressive personality and had a very difficult time.”

The Sound of Music actress recalled her rough childhood with an alcoholic mother and step-father as what may have lead to her attempt to “save” her husband from his “monsters.”

“You have to remember, I was very used to that kind of thing, because I was a very big codependent with my own family, and so I became that with Blake,” she said.