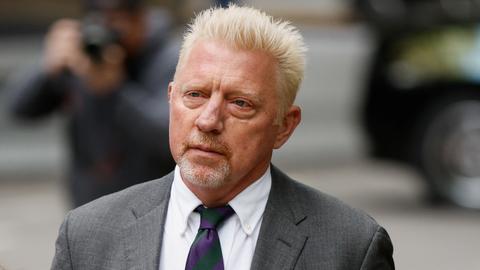 Six-time Grand Slam champion is found guilty of illicitly transferring large amounts of money and hiding assets after he was declared bankrupt.

Former tennis star Boris Becker has been jailed for two and a half years after being found guilty by a British court of charges relating to his 2017 bankruptcy.

The six-time Grand Slam champion, 54, will serve half of the term having being convicted at Southwark Crown Court in London over his transfer of huge amounts of money from his business account.

He also failed to declare a property in Germany and concealed $866,500 of debt and shares in a tech firm.

He was acquitted earlier this month of a further 20 charges, including nine counts of failing to hand over trophies and medals he won during his glittering tennis career.

Becker told jurors he did not know the whereabouts of the memorabilia, including two of his three Wimbledon men’s singles trophies.

Judge Deborah Taylor had released Becker – who won Wimbledon as an unseeded teenager – on conditional bail ahead of her sentencing decision on Friday.

Passing sentence, she told him: “You have not shown remorse, acceptance of your guilt and have sought to distance yourself from your offending and your bankruptcy.”

“While I accept your humiliation as part of the proceedings, there has been no humility.”

There was no immediate word that Becker would appeal and he will lodge any legal challenge from behind bars.

The former world number one told the jury how his $50 million career earnings were swallowed up by a costly divorce from his first wife Barbara Becker, child maintenance payments and “expensive lifestyle commitments”.

Becker said he was “shocked” and “embarrassed” when he was declared bankrupt in June 2017 over an unpaid loan of more than £3 million on his estate in Mallorca, Spain.

The German, who has lived in Britain since 2012, said he had cooperated with trustees trying to secure his assets, even offering his wedding ring, and relied on the advisers who managed his life away from tennis.

But the former player, who was supported in court by his partner and eldest son Noah, was found guilty of four charges.