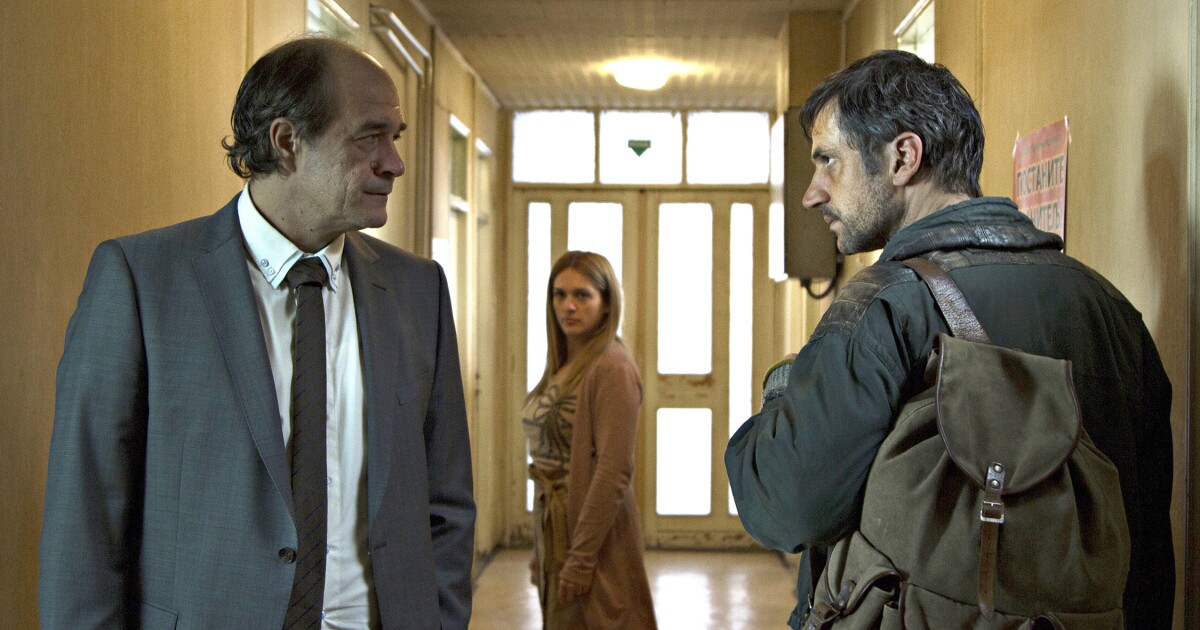 The methodical, softly heroic Serbian film “Father,” from writer-director Srdan Golubović, boasts a title both generic and towering, as if we’re going to find out what’s ordinary and extraordinary about its main character as a parent.

Its protagonist, poor day laborer Nikola (Goran Bogdan), is not who we see first, however. It’s his desperate wife, Biljana (Nada Ŝargin), dragging a son and daughter behind her through a factory entrance. When her shouted demand to whomever is around for the unpaid severance owed to her husband is met with indifference and silence, she douses herself with gasoline and sets herself on fire. Only then does anyone come to her aid.

Nikola has been working in the area felling trees — an overhead shot of one falling over seems to be a portentous visual metaphor — when he hears of the incident at his former place of employment. But the repercussions of his wife’s last-straw action goes beyond her placement in a psych ward — his kids have now been taken away by the local social services center and placed with foster parents until Nikola can prove the family’s home is an adequate one for children.

Flanked by two detached-looking deputies, the center’s blunt, unsympathetic and mildly threatening director (Boris Isaković) spins his reasoning for so drastic a decision as being in the traumatized children’s best interest as dictated by law. He also lets jobless, pleading Nikola know in no uncertain terms that they hold all the power to reverse this decision. It’s a scene of bureaucratic hellishness about poverty’s wretched cycle of hopelessness that wouldn’t be out of place in a chilly Romanian satire. Even after Nikola makes recommended changes — painting walls, cadging electricity from a neighbor, jury-rigging water to their dilapidated home from a hose — he’s still denied his kids.

His last resort is to take a written appeal directly to the appropriate national minister in Belgrade over 300 kilometers away. Without a car but perhaps also because it serves a feeling that he’s on a pilgrimage of mercy, Nikola makes the trek on foot. If this sounds like the kind of endeavor you’d read about in a newspaper or see covered on local news, that’s because Golubović did indeed take his narrative from a real father’s long walk for justice, one that was covered by the media and spurred the director to meet him in the middle of his protest.

As a film, though, Golubović is less interested in what’s conventionally stirring (or, consequently, morally enraging) about Nikola’s quest and more fascinated by the austere, solitary, Bressonian perseverance of it all. Golubović wants us to feel every step — sometimes woozy from malnourishment — of a journey through a stark countryside dotted by abandoned buildings, scavenging creatures and citizens both aimless and cautiously helpful.

Nikola’s walk indeed makes its way into the papers, it seems, but when a convenience store employee asks if it’s him, our protagonist says no. This is not that film, and he is not that type of hero. In the determined depths of Bogdan’s eyes, and the plain fortitude of his forward motion, we sense a man who just wants his kids back, not glory for a righteous complaint about systemic corruption.

That doesn’t necessarily make for reward-driven storytelling. And as much as we’re on Nikola’s side, he can seem impenetrable, which is a common trap for movie characters given Christlike qualities. And he’s tight-lipped to boot. But in the strides, bumps and doggedness that bring “Father” to a close — in which resolution is withheld but hopelessness feels at bay, and even an eccentric humor is allowed — there’s something oddly appealing in witnessing this dutiful, besieged parent make do with nothing to offer but himself, wherever that takes him.

In Serbian with English subtitles