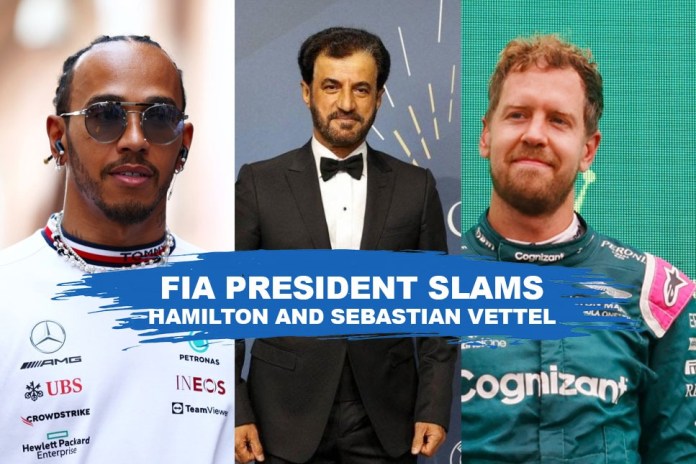 Formula 1: FIA president slams Lewis Hamilton and Sebastian Vettel: FIA president Mohammed bin Sulayem has hit against the likes of Lewis Hamilton and Sebastian Vettel for capitalizing on their leverage to bring issues to light of basic human rights and LGBTQ+ segregation throughout the course of recent years. Follow Formula 1 Live Updates on InsideSport.IN.

Meanwhile, the two drivers are notable for their off-course activism, with the pair seldom avoiding making their convictions clear to their friends, the game’s fans, and the countries which they have visited on the F1 schedule.

The FIA president bin Sulayem said, “Niki Lauda and Alain Prost only cared about driving. Now, Vettel drives a rainbow bicycle, Lewis is passionate about human rights and Lando Norris addresses mental health. Everybody has the right to think. To me, it is about deciding whether we should impose our beliefs in something over the sport all the time.”

“I am from an Arabian culture, I am international and Muslim. I do not impose my beliefs on other people, no way, never. If you look at my operation in the UAE there are 16 nationalities! Name me one federation that has that many nationalities. On top, there are over 34 percent women and seven religions, and even more Christians than Muslims,” Sulayem added.

“I am proud because it creates credibility and merit. But do I go and pose my beliefs? No, the rules are there, even now there are issues when it comes to, for example, jewellery, I didn’t write that,” Sulayem concluded.

Hamilton is a sharp promoter of racial equality and has spoken up on a modest bunch of significant issues connected with the point on various past events.

Meanwhile, Vettel has taken a keen interest in environmentalism and has been meaning to reveal insight into sustainable practices starting from the beginning of last season.

In any case, Ben Sulayem immovably accepts that F1 drivers should only concentrate on the driving part and avoid compelling their own beliefs onto others.

Meanwhile, bin Sulayem thinks F1 and politics should be kept aside to help the sport’s integrity. The drivers should only focus on the on-track activities and nothing else.