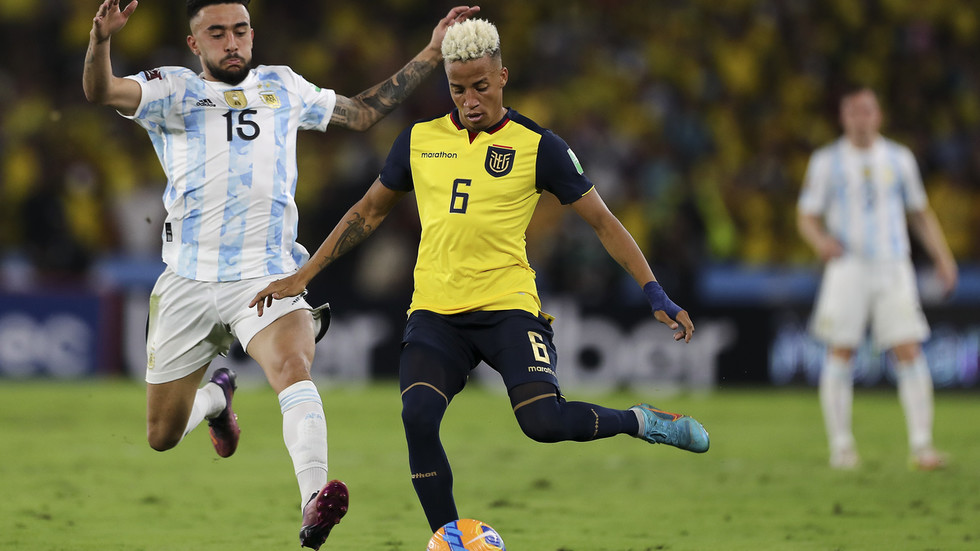 The country could face severe punishment from FIFA amid allegations of fielding an ineligible player, according to reports

South American nation Ecuador could be expelled from this year’s World Cup in Qatar after being accused of fielding a Colombian player throughout their qualification campaign, according to reports.

It has been claimed by the Chilean football association that defender Byron Castillo falsified documents to say that he was born in Ecuador in 1998 – when in fact he was born in Colombia in 1995, and that the player had used forged information to state his eligibility to play for Ecuador, who finished fourth in the South American World Cup qualification.

Chile finished in seventh position and did not qualify for Qatar, though they are understood to be petitioning FIFA to be awarded what would be a spare place at the tournament.

A report from Mundo Deportivo claims that FIFA have reached a decision to formally bar Ecuador from the World Cup, with a statement to confirm this expected in the coming days following the conclusion of a formal investigation.

It has also been claimed by Mundo Deportivo that Italy may attempt to position themselves to take Ecuador’s place after they were surprisingly eliminated from the World Cup playoffs by North Macedonia.

It is understood that they will attempt to convince FIFA of their request by virtue of being the top-ranked team to not qualify for the World Cup.


Ecuador had originally been drawn in a group which included their Qatari hosts, as well as Senegal and the Netherlands.

Chile’s legal representative pursuing the case has also urged FIFA to make a quick decision on the matter, and called for world football’s governing body to issue harsh sanctions against them if found to have acted against the rules.

“Chilean soccer is clear that a serious offense has been committed by the player (Byron Castillo). We have no doubt, with the documentation we have in hand, [de] that he is Colombian. We have a narrative that has a beginning, a middle and an end,” said Eduardo Carlezzo to radio station ADN.

“I’m sure that FIFA has knowledge and the need to speed up this very quickly. For this week we expect a demonstration.

“The Civil Registry of Ecuador declares in a legal ruling, which we have and that we sent to FIFA, that Castillo’s departure certificate does not exist; and, if it doesn’t exist, it’s fake.

“We cannot validate that a Federation accepts and validates a crime. They deserve the harshest sanction from FIFA,” he added.

Previous FIFA rulings have seen them reverse results for teams in cases of ineligible players.

Bolivia were forced to forfeit two games they played in 2018 World Cup qualifying after it was discovered that they had played a non-Bolivian player – subsequently losing an appeal they filed with the Court of Arbitration for Sport.