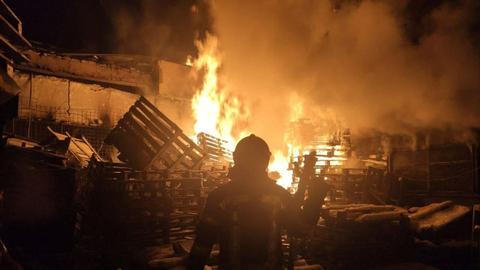 Russia stepped up its assault on Ukrainian city of Sievierodonetsk after claiming to have captured nearby rail hub of Lyman, as Kiev calls for longer-range weaponry from West to fight in Donbass as the conflict enters 95th day.

“With the use of artillery, Russian forces carried out assault operations in the area of the city of Sievierodonetsk,” the General Staff said in a statement on its Facebook page.

Russian gas producer Gazprom has said its supply of gas to Europe through Ukraine via the Sudzha entry point stood at 44.1 million cubic metres, up from 43.96 on Saturday.

An application to supply gas via another major entry point, Sokhranovka, was rejected by Ukraine, Gazprom said.

Russia pressed on with its attacks on eastern Ukraine, saying it had captured the strategic town of Lyman and claiming to have surrounded the urban center of Severodonetsk.

“The situation is very difficult, especially in those areas in Donbass and Kharkiv region, where the Russian army is trying to squeeze at least some result for itself,” Ukrainian President Volodymyr Zelenskyy said in his evening address.

“The town of Krasny Liman has been entirely liberated from Ukrainian nationalists,” the Russian Defence Ministry said, using Moscow’s name for Lyman and confirming an announcement made a day earlier by pro-Moscow separatists.

But a Ukrainian official denied Moscow’s claim that Severodonetsk had been encircled, saying government troops had repelled Russian forces from the outskirts of the key city.