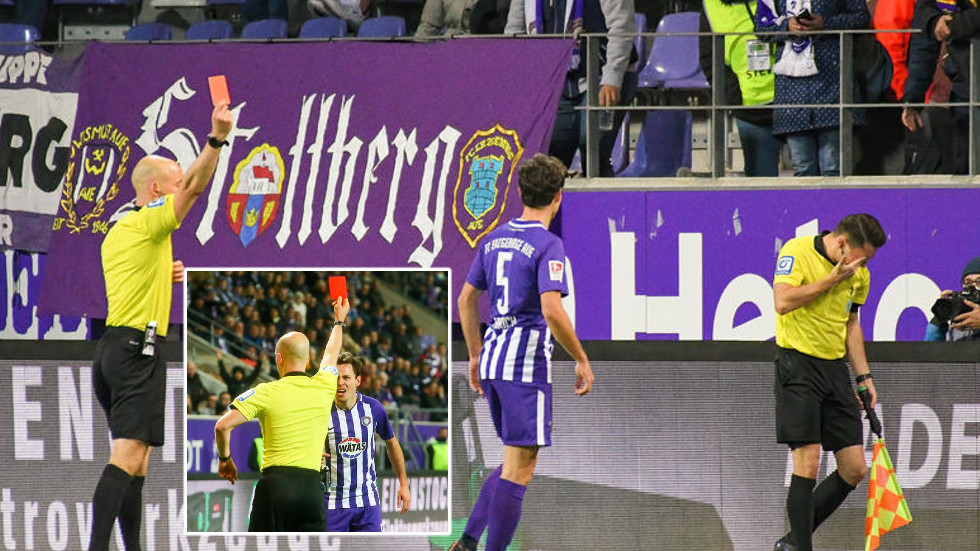 A German football player is planning legal action and will consult with a lawyer after receiving a seven-month ban for allegedly spitting at a player during a second division match – an act he denies.

Clemens Fandrich, 30, was playing for Bundesliga 2 club Erzgebirge Aue when the incident happened.

Towards the end of a 1-0 home win against Ingolstadt in October, a heated discussion broke out over a throw-in which the midfielder was involved in.

Its conclusion resulted in a red card for the ex-RB Leipzig star, who was accused of spitting in referee assistant Roman Pomentkin’s eye yet maintains his innocence.

“I am shocked. It is an absolute lie, and a slur on my reputation.

“I didn’t spit at him. I will get a lawyer to see how I can fight back,” he insisted following the dismissal.

This week, however, his lot worsened when the local FA, the DFB, slapped him with a ban until May 22 and warned him that he could have been made to sit on the sidelines for a full two years.

“Violence against referees and their assistants is punishable by suspensions of six months to two years,” the authority specified in a statement.

“However spitting in an assistant’s face is such a serious matter that we considered a heavier punishment.”

Aue board member and lawyer Kay Werner said that the verdict was “unfortunately” a “sobering experience”.

“I do not agree with the result in any way,” it was added.

Reacting to it himself, Frandich vowed to go to federal court to clear his name.

If fully imposed, the ban will be one of the lengthiest in the history of the German domestic game.

In 2012, Levan Kobiaschvili was banned for seven and a half months after punching referee Wolfgang Stark, when Hertha BSC were relegated from the Bundesliga for losing against Fortuna Dusseldorf.

In 1966, 1860 Munich’s Timo Konietzka is alleged to have pushed referee Max Spinnler in the chest and kicked him in the shin during a clash with Borussia Dortmund.

While there were no TV recordings to refer to at the time, he was still hit with a six-month sentence on the sidelines for his troubles.