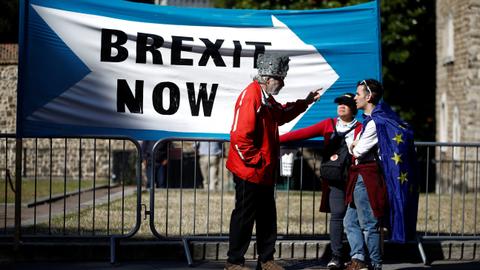 Sanctions postponed while negotiations are going on with UK and European Commission.

France stepped back on Monday in its row with the UK over post-Brexit fishing rights and ruled out imposing planned sanctions from midnight as Britain has signaled moving constructively on the fishing licenses.

President Emmanuel Macron, who is attending the 26th edition of the United Nations Climate Change Conference, or COP26, in Glasgow, Scotland, told reporters that sanctions will not be invoked while negotiations are going on between France, the UK and the European Commission, French news outlet BFMTV reported.

French Junior Minister for European Affairs Clement Beaune also confirmed the same on Twitter, saying that France had received “the first signals from the British authorities to speed up trade; a response to the latest proposals from the French authorities is expected by Wednesday.”

Beaune said he had invited his counterpart Brexit Secretary David Frost for an in-depth discussion Thursday on the difficulties in the application of the agreements between the European Union and the UK.

“In order to allow the dialogue thus opened to continue, the measures announced and prepared by France will not be applied before this meeting and the examination of the new British responses relating to fishing licenses,” he said in a tweet.

Paris had threatened to apply retaliatory measures from November 2 if the UK failed to act on granting licenses to French fishers under a post-Brexit trade agreement.

According to French officials, the UK has rejected over 40 percent of the applications of its fishers, preventing them from fishing in British waters.

Britain on its part had urged France to withdraw the threats involving increased customs and sanitary checks on goods and trucks coming from the UK and prohibiting British fishing vessels from unloading their produce at its ports, which would disrupt trade between the two countries.

After months of being at loggerheads, Macron and British Prime Minister Boris Johnson met Sunday on the margins of the G20 summit in Rome to de-escalate the tensions.