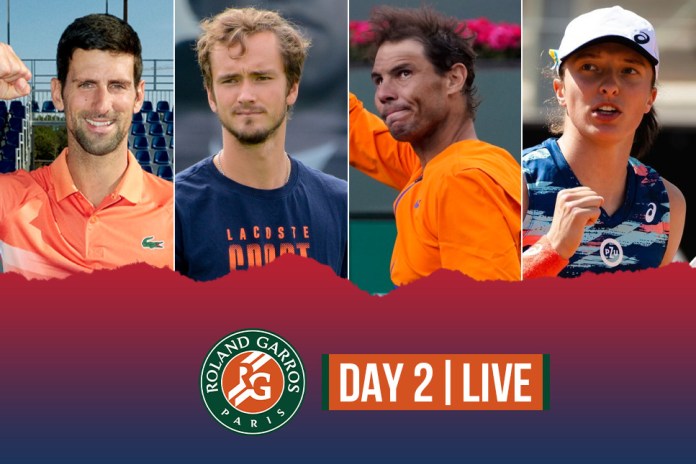 Former World No.1 Naomi Osaka is looking to resurrect her career after an indefinite break from Tennis late last year. She takes on 27th seed Amanda Anisimova in the opening round. Osaka had a good clay court season this year and her best performance was at Miami where she finished as runner-up. She started the clay court season at Madrid and faced second round exit. She missed the Italian Open due to injury.

Meanwhile, Anisimova started the year by winning the Gippsland Trophy. She has had a good clay court season by reaching the semifinal at Charleston and the Quarterfinal at Madrid and Italian Open. She is looking to go big at the upcoming Grand Slam event.

Iga Swiatek, who is dominating the WTA circuit this year is looking to win her second French Open title. She has won five championships this year already and is looking to add more to her kitty. She begins her campaign against Ukraine’s Lesia Tsurenko. Tsurenko’s best performance this year is second round appearance at Istanbul Open. She faces a tough challenge against Swiatek.

Reigning US Open champion Emma Raducanu is gearing up to make her senior debut at French Open. She is the 12th seed in the tournament and enters the French Open despite concerns over her back injury. Meanwhile Noskova is a 17-year old qualifier who makes her maiden entry to the main draw of a Grand Slam event. In the battle between the teenagrs, Raducanu is the favourite.

Second seed Barbora Krejcikova takes on Dianne Parry in the opening round. Krejcikova makes a return to the circuit after recuperating from shoulder injury. She will be making her maiden appearance on clay this year. Meanwhile, Parry is entering the contest after a poor season as her best performance is second round appearance at WTA 125K event in Paris.

Defending champion Novak Djojkovic will begin his French Open campaign by facing Japan’s Yoshihito Nishioka in the opening round. Djokovic who missed the Australian Open this year due to his non-vaccination status will be playing his maiden Grand Slam event. He enters the tournament with terrific form after winning the Italian Open title last week.

Meanwhile, Nishioka won the Coulumbus Challenger title earlier this year and he also finished as runner-up at Cleveland Challenger. The Japanese will face a big challenge against the World No.1 as Djokovic is the overwhelming favourite.

Fifth seed Rafael Nadal will take on Jordan Thompson in the first round of the French Open. Nadal, who won the Australian Open earlier this year is looking to win his 14th title at Roland Garros. Before the Australian Open, Nadal won the Melbourne Open title and after it he also won the Mexican. He however suffered a rib injury and made a comeback at Madrid, where he reached the quarterfinal. He then faced a second round exit at Italian Open.

Meanwhile, Jordan Thompson’s best performance this year is a quarterfinal appearance at Dallas Open. He failed to go past the second round in other tournaments. He faced first round defeat at Australian Open as he lost against Steve Johnson.

World No.2 Daniil Medvedev is looking to win his maiden title this year. Having finished as runner-up at Australian Open earlier this year, the Russian lost to Nadal yet again in the Semifinal at Mexico. He also made it to the quarterfinals at Miami. He then took a break for Hernia surgery and returned at the Genava Open, where he face first round exit. He is looking to win his first match at clay. He takes on Argentina’s Facundo Bagnis.

Third seed Stefanos Tsitsipas is having a great season in 2022. He started the clay court season by winning the Monte Carlo Masters title, which was his first title this year. He then reached the quarterfinals at Barcelona, semifinal at Madrid and also finished as runner-up at Italian Open. He was the runner-up at Roland Garros last year and he looks to win his maiden slam this year.

Meanwhile, Lorenzo Musetti’s best performance this year so far was playing the quarterfinals at Maharashtra Open, ATP Rotterdam and Grand Prix Hassan. He faced first round defeat at Australian Open this year and a similar fate awaits him at Roland Garros as Tsitsipas is the overwhelming favourite in the first round.

French Open Live streaming: This is the first year that the Sony Sports Network will be showing the prestigious Grand Slam.

The broadcaster is going all out with LIVE coverage of the event in four languages.

For the first time in India, audiences will get to watch the Roland Garros in a language of their choice.

Sony Sports Network will also do a STUDIO show around the LIVE Coverage. The tournament will see the return of Extraaa Serve, which is the broadcaster’s flagship show for Grand Slam tournaments.