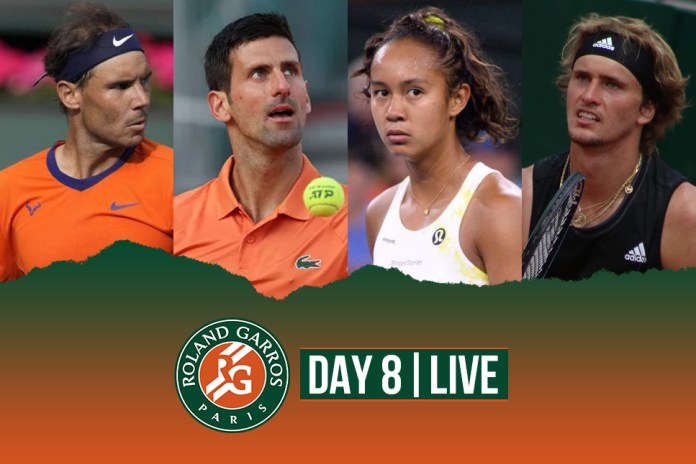 French Open Day 8 LIVE – Djokovic vs Schwartzman LIVE: Action intensifies at the Roland Garros as fourth round gets underway today. Big names like World No.1 Novak Djokovic, 21-time Grand Slam winner Rafael Nadal, Third seed Alexander Zverev and 2021 US Open finalist Leylah Fernandez will all be in action, vying for a spot in the quarterfinals. The matches start at 2:30 PM IST and will be broadcasted LIVE on Sony Ten network. Follow French Open 2022 LIVE Updates with InsideSport.IN

Carlos Alcaraz vs Karen Khachanov 12:15 AM on Thursday

Defending champion Novak Djokovic will look to continue his impressive run in the French Open this year, as he faces Diego Schwartzman in the fourth round. Djokovic is yet to lose a single set in the first three rounds in the tournament. He is on an eight-match unbeaten streak now.

Meanwhile, Schwartzman, who is the 15th seed enters the fourth round after defeating Grigor Dimitrov in straight sets. Schwartzman is looking to enter his third consecutive quarterfinals at the French Open.

Rafael Nadal will take on 9th seed Felix Auger Aliassime in the fourth round of the French Open. 13-time champion Nadal has been at his dominating best this year, having won all his matches in the first three round in straight sets.

Meanwhile, Felix Auger Aliassime is making his maiden fourth round appearance at the Clay court major. Apart from winning the second round against Ugo Carabelli, Aliassime had to work hard for his wins. He won his first round with a come-from behind victory after losing the firts two sets. He also had to play two tie-breakers in his three-set victory over Filip Krajinovic in the third round. Aliassime will face a tough challenge against the King of Clay.

Third seed Alexander Zverev takes on Spain’s Zapatta Miralles in the fourth round. Zverev defeated Brandon Nakashima in straight sets in the third round and has shown good form in the tournament so far. He is looking to seal his fourth quarterfinal spot at Roland Garros.

Meanwhile Zapatta Miralles is a qualifier, who has made his first-ever appearance in the fourth round of a Grand Slam event. He has defeated 13th seed Taylor Fritz and 23rd seed John Isner in the tournament to set up clash with Zverev in the fourth round.

19-year old Leylah Fernandez is eyeing her first-ever quarterfinal at the French Open. The 2021 US Open runner-up will face 27th seed Amanda Anisimova in a blockbuster fourth round clash. Leylah Fernandez had to work hard in the third round against Belinda Bencic to seal a spot in the fourth round.

Meanhile, Anisimova defeated Naomi Osaka in straight sets in the first round.

She also clinched a 6-4, 6-1 victory against Donna Vekic in the second round.

Her game against Karolina Muchova went to the third set before the later pulled out.

French Open Live streaming: This is the first year that the Sony Sports Network will be showing the prestigious Grand Slam.

The broadcaster is going all out with LIVE coverage of the event in four languages.

For the first time in India, audiences will get to watch the Roland Garros in a language of their choice.

Sony Sports Network will also do a STUDIO show around the LIVE Coverage. The tournament will see the return of Extraaa Serve, which is the broadcaster’s flagship show for Grand Slam tournaments.