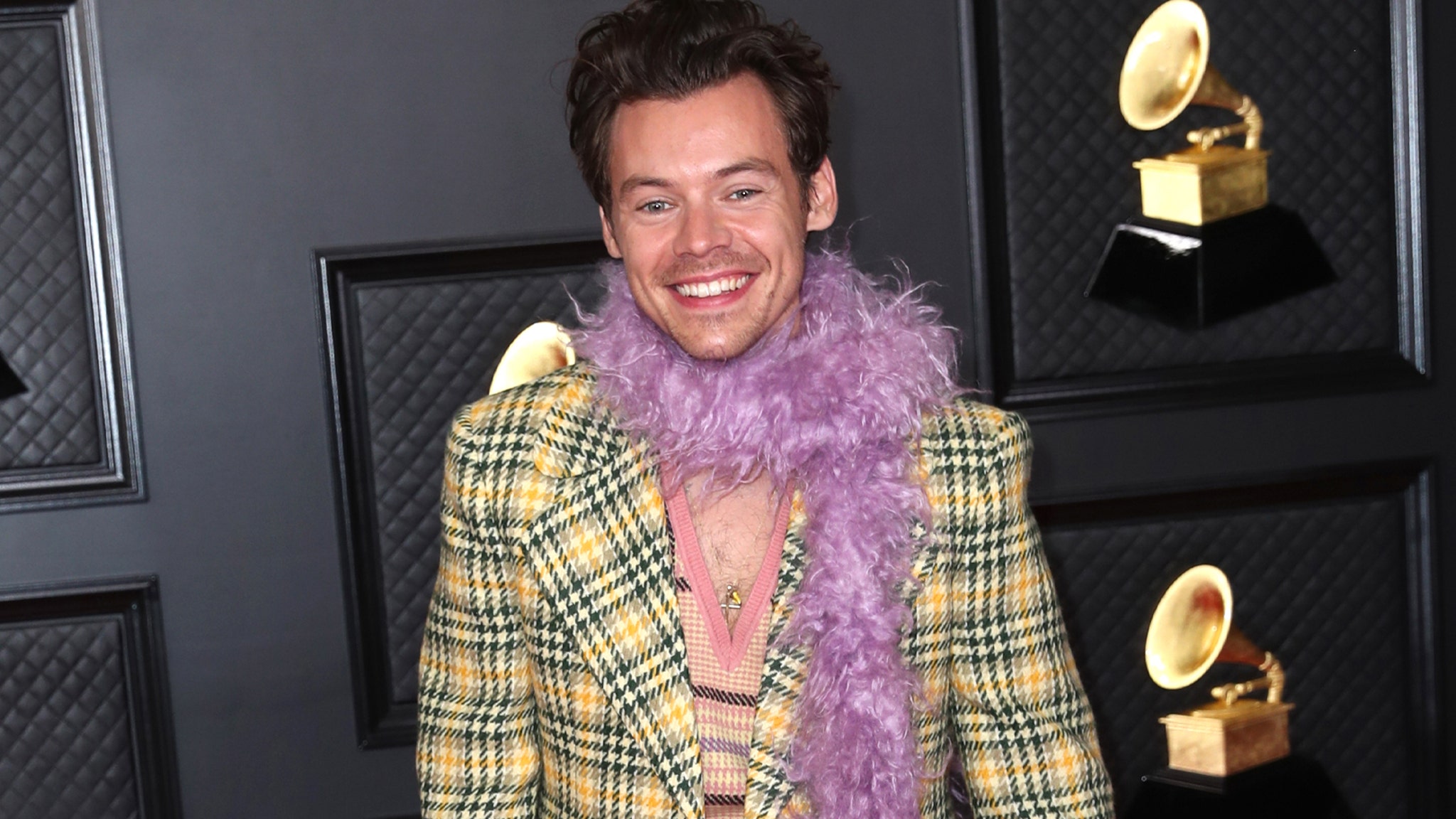 “When you’re really happy, it doesn’t matter what strangers think about you.”

Since achieving international heartthrob status, Harry Styles has romanced more than a few beautiful women. Through the years, Harry has been spotted with models, musicians and actresses but has remained pretty tight-lipped about it all. While Harry has never been one to confirm or deny his relationship status, that hasn’t stopped fans from speculating — and from some of his famous exes from speaking out!

Take a look back on all of Harry’s past relationships…

Before Harry found fame on “The X Factor,” he dated Felicity Skinner as a teen after meeting through a mutual friend. The couple lived in different cities but dated long distance for almost a year before they drifted apart. Despite their split, Felicity has nothing but good things to say about him.

“He was a really good boyfriend, very romantic and, yes, shy. He was good looking and obviously I found him very attractive. We were together for just under a year…We just clicked straight away and got on really well. He has a really cute smile. We started seeing each other when we were both about 15. He was really sweet. It was puppy love and we were definitely each other’s first loves,” Felicity said.

Back in 2011, Harry was linked to late television personality Caroline Flack after meeting on the set of “The X Factor U.K.” the year prior. At the time, Harry was just 17, while Caroline was 31. In her autobiography, Caroline said she had known Harry had a crush on her before they started dating, as he mentioned her in interviews and “made it pretty obvious.” The pair quietly began dating and Caroline noted that the age difference didn’t bother her because she never felt much older than Harry. Things took a turn when news of their relationship was made public, causing them to split.

“We were both single, we got on well and we had a laugh. It was only when it became public knowledge that things turned sour. At the beginning it was all very playful. He joked about being attracted to older women. It began to go wrong when Harry was pictured coming out of my house one morning. And once that was out, it was open season. After that anyone could say anything. In the street people started shouting at me ‘pedophile’ and ‘pervert,'” Caroline wrote in “Storm in a C Cup.”

12 Famous Men Who Have Gotten Real About Mental Health

The following year, Harry was spotted with model Emma Ostilly. The duo reportedly met when she appeared in One Direction’s music video for “Gotta Be You.” Harry and Emma are said to have reconnected when the band visited New Zealand, where she had moved after starring in the video. Although neither Harry nor Emma ever commented on the relationship, it appears things eventually fizzled out.

Later in 2012, Harry had a “short-lived” relationship with “Inbetweeners” actress Emily Atack. While she says they were never official, they did have fun spending time together.

“We were never boyfriend and girlfriend. I think that’s the first time I’ve ever admitted to what it was, because I’ve always just shrugged it off before. But I think it’s best to clear it up. So yeah, we had a short-lived thing that was just a bit of fun. Then we went off in our opposite directions. Harry and I had a laugh. It was brief, but fun, and then we moved on,” Emily told Reveal magazine.

The Most Shocking Celebrity Splits During the Pandemic

In one of Harry’s most high-profile relationships, he began dating Taylor Swift in late 2012 after the couple met at an award show earlier in the year. While they reportedly began growing close after their first meeting, things didn’t officially take a romantic turn until that fall. They were first photographed together in December and spent the month getting cozy, from a ski trip to meeting each other’s parents. Just a few days after sharing a kiss on New Year’s Eve in Times Square, the couple split, reportedly while on vacation.

Following their split, the former couple took turns writing songs about one another, which Harry actually described as “flattering.”

“I think about what it means to me to write a song about somebody else and for somebody else to do that, it’s like flattering, even if the song isn’t that flattering, you still spent time on it and ultimately, using Taylor as an example, she’s a great songwriter. So at least they’re good songs,” Harry said on “The Howard Stern Show.”

In the months after his breakup with Taylor, Harry reportedly had a fling with Nicole Scherzinger, who was 35 at the time. The duo, who met on the set of “X Factor,” never confirmed the relationship but things ended not long after they began.

These Awkward Encounters Between Celebrities Are Cringeworthy

In 2013, Harry also reportedly had a fling with Rod Stewart’s daughter Kimberly. The couple, who was reportedly set up by a friend, didn’t speak out about their relationship but Rod seemingly confirmed the rumors when he said Harry’s “car was here in the morning.”

In November 2013, Harry was spotted out to dinner with Kendall Jenner for the first time. While they initially denied dating rumors, they were spotted again just a few months later on a ski trip. They reportedly split in February 2014 but ended up reconnecting over a year later at the end of 2015. They went on to spend the holiday season yachting in St. Barts. Although they didn’t confirm their relationship, Kendall’s sister Khloé Kardashian said she definitely thought they were dating.

“Do I think they’re dating? Yes. I don’t know if they’re like boyfriend-girlfriend. Nowadays, I don’t know, people are weird with stuff. So I don’t know their ‘title.’ But I mean, they were in St. Barts together hanging out, so to me, that’s dating. I would call that dating,” Khloé told ET.

It’s not clear what happened after their holiday vacay, but they were next spotted in September 2016 having dinner together. Since then, the former couple has appeared friendly whenever they bump into each other at events.

These 11 Celebs Are Totally Obsessed With Coachella

In between Harry’s hookups with Kendall, he reportedly briefly dated model Paige Reifler during the summer of 2014. After the pair were spotted at a party in London, Paige told an outlet, “Yes, I am seeing him.”

Harry and Australian model Nadine Leopold were first spotted together in November 2014. The duo was seen together on several other occasions until March 2015 when they reportedly went their separate ways.

In June 2015, Harry was spotted with model Sara Sampaio in New York City. The rumored couple was spotted getting affectionate before spending the night together at a hotel. It’s unclear what else happened between the duo.

Several months later, in October 2015, Harry connected with model Georgia Fowler while visiting New Zealand. Not much is known about their short relationship, but Georgia did share a video playing Scrabble with the singer on her Snapchat. While some fans later speculated that Harry’s song “Kiwi” was about Georgia, she says she’s not so sure.

“Ah, don’t really know anything about it. I definitely don’t have a baby! The song’s all about [having a baby] so I think it’s highly unlikely [it’s about me],” Georgia said on “The Morning Show.”

After Harry’s second split from Kendall in early 2016, he seemingly took a break from the dating scene. Rumors didn’t surface about another relationship until the spring of 2017 when fans speculated that Harry was dating British blogger and chef Tess Ward. Rumors went into overdrive when she reportedly wore Harry’s Gucci shirt to the Audi Polo Challenge in May. The pair split just a month later amid reports that Tess was back together with her ex.

A few months later, Harry connected with Camille Rowe after reportedly being introduced by their mutual friend Alexa Chung. The couple was first spotted together at a Fleetwood Mac show in New York City and was seen on several other occasions throughout the year. Harry reportedly even introduced Camille to his parents in December. Not much is known about the rest of their relationship but the couple is said to have split in July 2018.

Neither Harry nor Camille have directly spoken out about their year-long relationship but Harry’s friends have said he was really impacted by the split. He also reportedly wrote some “Fine Line” songs about Camille and even included a voicemail from her at the end of one of the tracks.

In early 2019, Harry was linked to model and actress Kiko Mizuhara. Although Kiko had tweeted that she had “never met him” and reports of their relationship were “fake news” she was later spotted celebrating his 25th birthday by his side. It’s not clear what ended up happening between the pair.

In September 2020, Harry met Olivia Wilde after he was cast in her film “Don’t Worry Darling.” Just a few months after meeting Harry, Olivia split from her fiancé Jason Sudeikis, sparking rumors that she was more than friends with the singer. In January 2021, Olivia and Harry were spotted holding hands while attending the wedding of Harry’s agent. Since then, the duo has been spotted all over the globe, showing off some PDA. Olivia even joined Harry on tour around the U.S. and introduced her two children to him. The couple has not yet spoken out about their relationship, but Olivia says she’s really happy.

“I think what you realize is that when you’re really happy, it doesn’t matter what strangers think about you. All that matters to you is what’s real, and what you love, and who you love. I’m happier than I’ve ever been. And I’m healthier than I’ve ever been, and it’s just wonderful to feel that,” Olivia told Vogue.