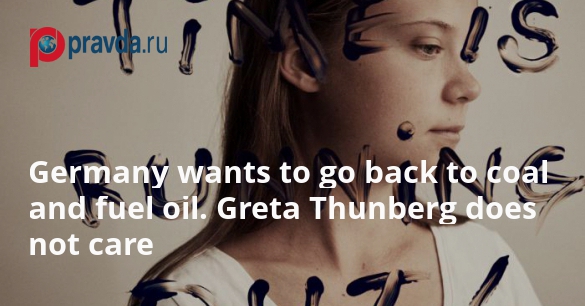 Greta Thunberg should have graced the front pages of newspapers all over the world on My 25. However, the ecological agenda did not make it — the anti-Russian one took over.

Germany, with the government of the SPD and the Greens, had a plan to phase out coal generation by 2030. However, this is not going to happen if Berlin refuses Russian gas supplies.

According to n-tv.de, German Economy Minister Robert Habeck will submit an emergency decree to the Bundestag to allow the country’s government to use coal- and oil-fired power plants again. For this purpose, they must be brought into working condition, have fuel reserves and be ready to generate electricity should Russia cut or reduce gas supplies to Germany. In total, 21 fuel oil and coal-fired power plants will be included in the network reserve.

According to the decree, the German authorities will be able to activate the use of coal facilities without parliamentary approval for a term of up to six months. Until March 31, 2024 they will be kept in reserve.

By 2035, Germany was supposed to become “environmentally neutral”. However, the change of the “green” course to the “anti-Russian” has made the plan unfeasible. The use of coal will obviously increase the level of pollution, given the fact that Germany’s brown coal is much more toxic in terms of emissions than black coal. Such a move will throw Germany, and the whole of Europe, back in terms of decarbonization plans.

Coal-fired power plants are as strong polluters, with Germany and Poland being among the top ten CO2 emitters. Based on last year’s assessment, the share of greenhouse gas emissions from coal-fired power has increased significantly again.

Although Berlin claims that plans to phase out coal generation remain the same, it pursues three different goals that cannot be achieved simultaneously. Germany wants:

All this suggests that German officials is lying at some point, probably when they talk about the need to say no to the Russian gas.

Has anyone seen Greta Thunberg?

In early 2019, when the coal commission set up by Angela Merkel’s federal government agreed on a compromise to phase out coal in Germany by 2038, Thunberg said in an interview with Dpa:

“Germany wants to switch to coal by 2038. This is totally absurd.”

Greta Thunberg urged Germany to do it eight years earlier.

Today, she does not appear to be anywhere out there. Where’s her “How dare you” today?That’s all you need to know about Western propaganda — this machine works when there are orders and money. No money — no Greta Thunberg, no climate problem.

According to the German Ministry of Economics, by the summer of 2024, the share of the Russian gas may gradually reduce to ten percent of Germany’s entire consumption. In mid-April, it amounted to 35 percent. In order to abandon the Russian share in gas for heating the residential sector, it was proposed to decrease indoor temperatures in German apartments by six percent in winter — from the current 20.0 to 18.8 degrees Celsius.