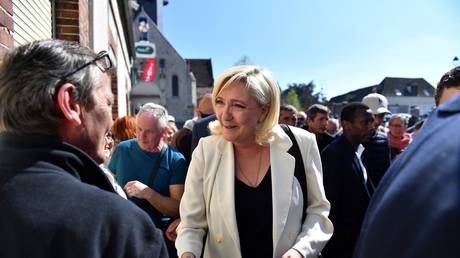 The leaders of Germany, Spain, and Portugal have named the incumbent French president Emmanuel Macron as their preferred candidate at the upcoming second round of the election, warning the voters against supporting National Rally’s leader, Marine Le Pen.

After claiming in the beginning of the article that Russian President Vladimir Putin’s “aggression” targets not only Ukraine but also the values which France and its European partners defend, the authors of the article came to their main point.

According to Scholz, Sanchez, and Costa, “the populists and the extreme right” in their countries “have made Vladimir Putin an ideological and political model, echoing his nationalist demands.” This should not be forgotten, no matter how much such politicians “are trying to distance themselves from the Russian aggressor,” the leaders emphasized, possibly referring to Le Pen’s numerous denials of sympathies for the Kremlin.

Therefore, the authors argue, the second round of the French election is not “an election like the others,” especially considering “France has been a central country in the European project.”

“It is the choice between a Democratic candidate, who believes that France is stronger in a powerful and autonomous European Union (EU), and a far-right candidate, who openly sides with those who attack our freedom and our democracy…” they said.

Describing the alleged benefits of the “greater European solidarity,” Scholz, Sanchez, and Costa did not miss the chance to criticize supporters of Brexit, who, in their opinion, have only brought about various problems for the UK.

Unity is the only way to maintain prosperity, to “achieve globalization in a human way” and to “defend international peace and order,” the column reads.

“That is why we need France by our side,” Scholz, Sanchez, and Costa reveal.

They further specified that they needed France, which “welcomed the exiles fleeing the dictatorships of Franco and Salazar” and which “defends justice against anti-democratic leaders, such as Putin.”

“Which France will come out of the polls on April 24? Citizens of the French Republic have the choice,” the leaders of Germany, Spain, and Portugal said.

Writing on Telegram, Zakharova said that she had two questions:

“So, is it possible for the president of one country to support the presidential candidate of another country? Isn’t that considered election interference now?” she wrote, apparently referring to the fact that the West has been accusing Moscow of interfering in foreign elections for years now.

Zakharova’s second question relates to an issue that Western countries have long been obsessed with.

“What about the gender balance in the elections? Is it not a factor anymore? Or in developed democracies, when real power is at stake rather than declared rights, gender does not matter?” she wrote.

Meanwhile, the latest polls suggest Macron may not need such open support from his European colleagues. The Opinion Way survey, conducted on Thursday with 1334 participants, reveals that 56% of the electorate are ready to support the incumbent president, with 44% prepared to vote for Le Pen.