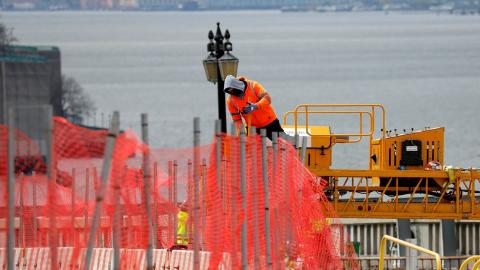 The firm cited a gloomier outlook due to an expected decline in fiscal support through the end of next year and a more delayed recovery in consumer spending than previously expected.

The firm previously expected 5.7 percent gross domestic product (GDP) growth in 2021 and 4.4 percent growth in 2022, according to research released on Sunday from authors including its chief economist Jan Hatzius.

They pointed to a “longer lasting virus drag on virus-sensitive consumer services” as well as an expectation that semiconductor supply likely will not improve until the first half of 2022, delaying inventory restocking until next year.

And on top of the near-term virus drag, they also expect spending on some services and non-durable goods to stay persistently below pre-pandemic trends especially “if a shift to remote work results in some workers spending less overall.”

On a quarterly basis Goldman cut both its fourth-quarter 2021 and first-quarter 2022 GDP estimates to 4.5 percent from 5 percent.

However, it increased its fourth-quarter 2022 estimate to 1.75 percent from 1.5 percent.