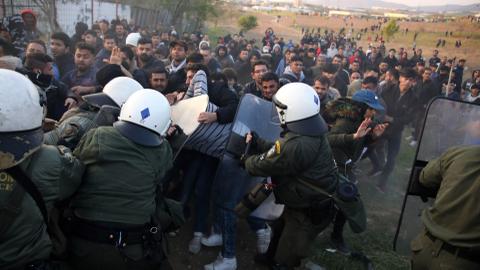 Greek policies towards asylum seekers contradict European values, basic human rights, reports a German weekly. It also highlights the systematic use of force against asylum seekers along EU borders, suggesting they are not isolated incidents.

The EU has clear rules regarding the treatment of asylum-seekers giving them the right to apply for asylum once they are within EU territory, but Greece violates these rights, Der Spiegel reported on Thursday.

It drew attention to violent brutality and a systematic pushback policy practiced by Greek authorities, including police, special forces, and coast guard units.

“They contradict the values that European politicians consistently evoke,” it wrote.

Kyriakos Mitsotakis was once considered a liberal in his conservative political party New Democracy, it noted, adding that he has “radically tightened his country’s migration policies” once he took over the power.

Greek border guard units killed at least two migrants when they tried to cross the Turkish-Greek border in February 2020.

The incident was described as an “invasion” by Mitsotakis.

Despite the Greek government’s denial, which insisted that they adhere to European and international law, Der Spiegel noted that it has evidence refuting Greek counterclaims.

Calling attention to the significant drop in the number of asylum-seekers to Europe, the weekly reported: “The legal violations committed at Europe’s external border are not isolated incidents. They are part of a system. The EU is using force to keep refugees away.”

Greece is holding migrants and refugees at a secret detention centre for hours without food and water before stripping them and sending them back to Turkey, an investigation by the New York Times has revealed pic.twitter.com/8UlX2UYNex