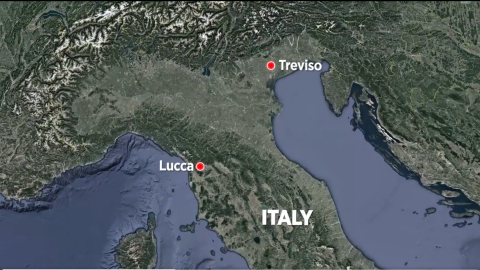 Italian firefighters and the Alpine rescue service say searches began after the chopper disappeared from radar screens while flying over the province of Modena, in the Tuscan–Emilian Apennines.

A helicopter with seven people on board, including four Turkish nationals, has gone missing in central Italy.

A single-engine red Agusta Koala helicopter took off from the Capannori Lucca Tassignano Airport in Lucca for Treviso on Thursday morning but soon disappeared from the radar, according to Italian daily Il Gazzettino.

Four Turkish nationals working for a Turkish private company were on board, diplomatic sources in Italy told Anadolu Agency on Friday.

Apart from the Turks and an Italian pilot, two Lebanese nationals were on the helicopter.

According to preliminary information, the helicopter disappeared at the border between Tuscany and Emilia-Romagna.

Helicopter with 4 Turkish nationals on board goes missing in Italy https://t.co/FCuQGwggC4 pic.twitter.com/tV3gQZVLNA

There was no definite information concerning the location of the missing helicopter till the time of filing of this report.

The Turkish Embassy in Rome is maintaining regular communication with both Italian authorities and officials of the Turkish company, the Turkish Foreign Ministry said.

Italian authorities have launched a search operation and patrolled the Apennine region on the border between the provinces of Lucca and Modena, particularly the area between Pievepelago and San Pellegrino in Alpe, according to local media reports.

The operation was suspended on Thursday night due to darkness and resumed on Friday morning, sources told Anadolu Agency.