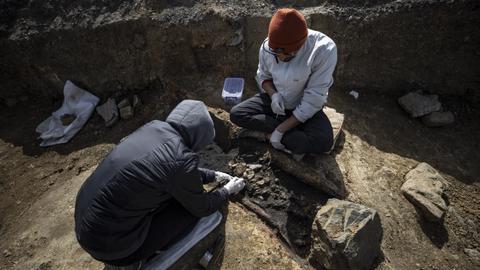 The discovery is “one of the oldest finds” in the ancient city of Khalkedon (Kadikoy), also known as the “Land of the Blind”.

A brick tomb dating back to the Hellenistic era has been unearthed during the ongoing archaeological excavation at the iconic Haydarpasa Train Station in Istanbul’s Kadikoy district.

What makes the find particularly interesting, according to Rahmi Asal, director of the Istanbul Archaeological Museum, is that the tomb was used for cremation.

“This is very valuable. It is one of the oldest finds in this area,” he added.

According to the preliminary analysis, the body was cremated inside the tomb, but the skeleton and other remains survived the blaze and have now been unearthed, Asal explained.

A terracotta goblet and a perfume bottle, both of them with visible marks of fire damage, were found with the skeletal remains, he added.

“I have never seen this type of a cremation tomb from the Hellenistic period … Perhaps this will give us many more valuable insights.”

Archeological excavations around the historical Haydarpasa Train Station, located on the Asian side of Istanbul, have unearthed a wealth of historical ruins, all hinting at the rich past of the ancient city of Khalkedon (Kadikoy), also known as the “Land of the Blind.”

The digs, started in 2018 by Türkiye’s Ministry of Transport and Infrastructure along with the Ministry of Culture and Tourism, have been conducted with the utmost care over the past four years.

The findings over past years, which include historical structures from the Ottoman, Byzantine, Hellenistic and Classical eras, shed light on the deep roots of Türkiye, a cradle of civilisations.