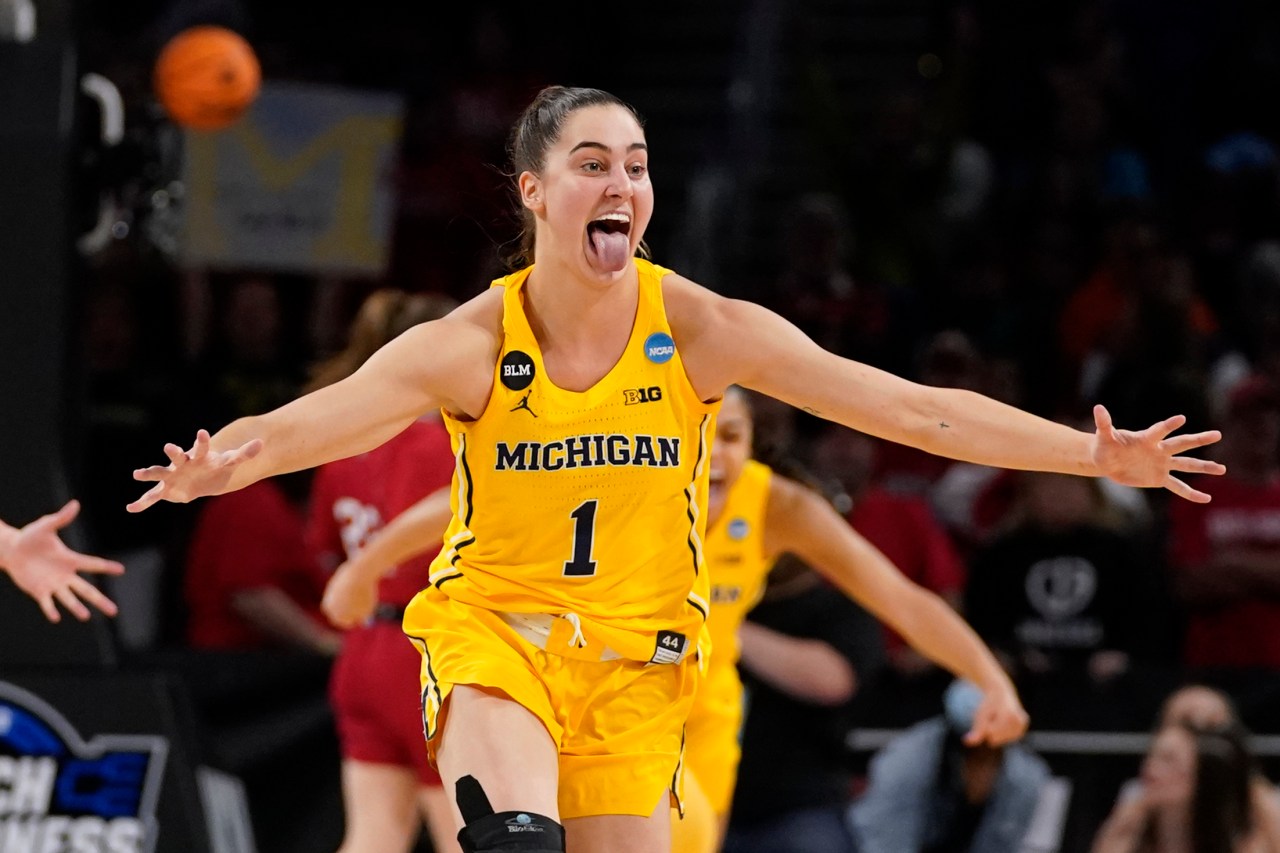 WICHITA, Kan. (AP) — Michigan earned its chance to keep making history, and believed in it.

The third-seeded Wolverines reached the Elite Eight for the first time with a 52-49 win over tenth-seeded South Dakota on Saturday night, helped by Naz Hillmon’s 17 points and 10 rebounds and Laila Phelia’s 14 points — including a go-ahead layup in the final minute.

“We have players that came in here with this vision and this belief that they could do something incredibly special,” Michigan coach Kim Barnes Arico said. “They wanted to be a part of that Block M and that excellence, and here we are sitting at the table going to the Elite Eight. It’s just a dream like you could never imagine, but it’s people that came together and created something incredibly special. It’s awesome.”

Michigan (25-6) will play No. 1 seed Louisville on Monday with a trip to the Final Four at stake. The teams met earlier this season on Dec. 2, when Louisville beat Michigan 70-48.

South Dakota (29-6) was trying to become just the fifth double-digit seed to reach the Elite Eight. The Coyotes had won 27 of 28 and were coming off a stunning upset of No. 2 seed Baylor.

“It’s hard to lose,” South Dakota coach Dawn Plitzuweit said. “You always want one more. But it certainly wasn’t from a lack of effort, lack of anything. We just needed to make one more play in all reality.”

Hannah Sjerven had 17 points and eight rebounds before fouling out for the Coyotes. Chloe Lamb, the Summit League Player of the Year who averaged 16 points per game, was held to just six points.

Lamb said the fact that South Dakota had a historic season won’t ease her short-term pain.

“Losing sucks for a lot of reasons,” she said. “I think one of those being you forget all the good stuff that happened, right?”

The Coyotes nearly pulled off another win. With the crowd overwhelmingly on their side, they held the Wolverines without a field goal for 3:40 to start the game and led for much of the first half.

Back-to-back 3-pointers by Grace Larkins put the Coyotes ahead 25-23 in the second quarter, and they led 26-24 at the break thanks to 11 points from Sjerven. Phelia, who had averaged just under nine points per game for the season, scored 12 in the first half to keep Michigan in the game.

Michigan took a 39-38 lead into the fourth quarter, with Hillmon scoring nine points in the third.

A mid-range jumper by Lamb rattled in to tie the game at 48 with 48.5 seconds remaining.

Phelia made a layup with 22 seconds remaining, and Brown later made two free throws to put the Wolverines up by four.

South Dakota’s Maddie Krull made the first of two free throws to cut Michigan’s lead to 52-49 with 7.5 seconds left. She unintentionally missed the second, and there was a scramble for the ball before it went out of bounds. It wasn’t immediately clear whom the ball last touched, but South Dakota got it after the referees’ review.

But the Coyotes couldn’t get a clean look, with Kyah Watson missing a 3 as time expired.

“I think we were probably outsized in every position and maybe out-athleticized in all positions, and to our ladies’ credit they kept fighting and competing and found a way to be in that game and have an opportunity,” Plitzuweit said. “I’m proud of our young ladies for what they did.”

South Dakota: Lamb, Sjerven and Liv Korngable are super-seniors who came back to make a run. They did that, nearly propelling the Coyotes to the Elite Eight for the first time. The other two starters are freshmen. With that foundation and the support the Coyotes received along the way, the program appears to be in good hands.

Michigan: The Wolverines got off to a rough start in what was essentially a road environment and scraped out a win despite Hillmon — a first-team All-American — going scoreless in the first quarter.

“I think sometimes my defense gets me going … I knew if I could continue that motor and get my teammates second opportunities by getting offensive boards, that would help me and I can get into the flow of things,” she said.

Sjerven played 28 minutes and made 7 of 11 shots. She picked up all five of her fouls in the second half and played just nine minutes after the break. When she fouled out, the Michigan bench celebrated wildly.

Thousands of South Dakota fans made the trip, and they were active throughout the game. Even after the game, they started a “U-S-D” chant as the Michigan band played its school song. Lamb referred to the crowd as a “sea of red.”

Barnes Arico at the postgame media session: “I’m not sure what I look like. I borrowed some clothes to get here because we had a celebration in the locker room.”