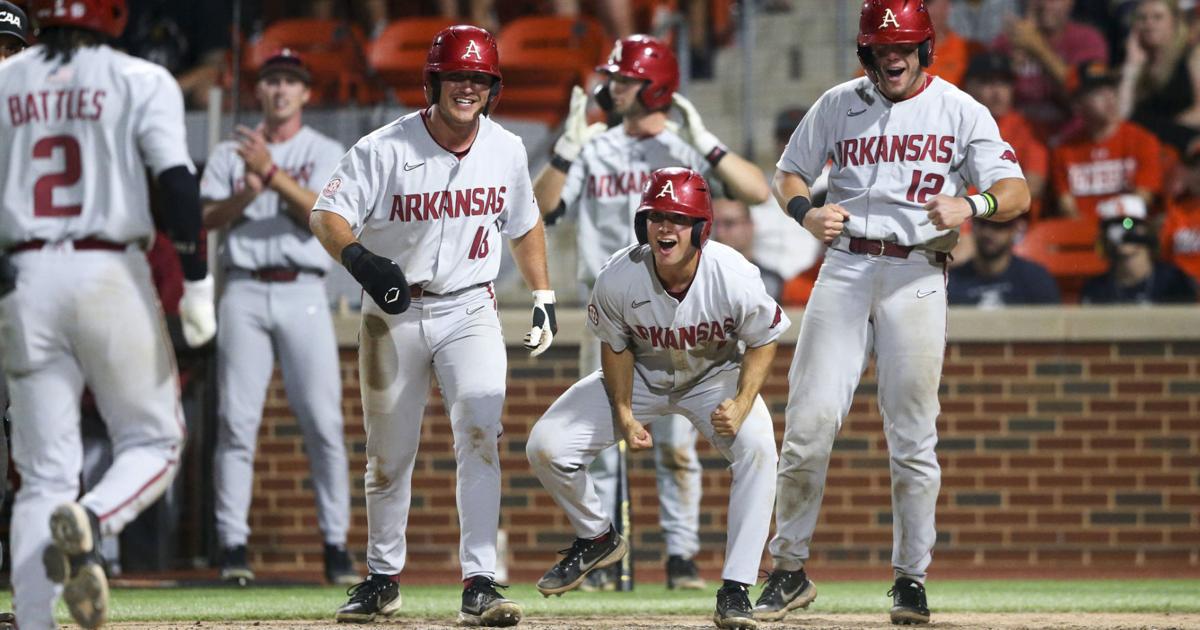 FAYETTEVILLE — Both Arkansas and North Carolina defeated their opponents 7-3 on Monday night to advance to this weekend’s super regional in Chapel Hill.

It’s a somewhat familiar position for the Tar Heels to be in. Six times they have hosted a super regional at Boshamer Stadium. In three of those six super regionals they faced an SEC opponent. Each of those series went to three games.

Arkansas and North Carolina will begin at 10 a.m. Saturday and then noon Sunday. Like the other series they have hosted against SEC foes, if it goes three games that will take place on Monday at a time to be determined.

In 2019, the Tar Heels hosted Auburn and dropped the series to the Tigers 2-1. In both 2007 and 2013, North Carolina hosted South Carolina with the home team advancing to the College World Series both times winning both super regionals, 2-1.

The Tar Heels enter this super regional as one of the hottest teams in the nation winning 16 of their last 18 games. North Carolina (42-19) won the ACC Tournament and are the tenth-seeded team. Arkansas (41-19) staggered into the postseason losing series to Vanderbilt and Alabama to end the regular season. Then dropped two in a row in the SEC Tournament. However, Arkansas, as it has so many times under Dave Van Horn, seemed to right the ship and won the Stillwater Regional defeating Oklahoma State 7-3 in the finals. The Tar Heels are 0-1 all-time against Arkansas, with the lone meeting coming during the 1989 College World Series and Razorbacks posting a 7-3 victory.

The super regional will feature three players named to the 2022 Collegiate Baseball Freshman All-America Team. North Carolina outfielder Vance Honeycutt is the Tar Hell on the squad. He will be one the Arkansas pitchers have to be careful with his power and speed combination.

Two of the pitchers likely to throw to Honeycutt are starter Hagen Smith and closer Brady Tygart. Both also were named to the All-America team.

Smith has made 17 appearances with 14 starts on the mound this season, logging a 6-2 record with a 4.89 ERA in 70 innings. The left-hander has struck out 79 while limiting opposing hitters to a .234 batting average. Smith’s six wins are tied with Noland and Jaxon Wiggins for the team lead. He earned his first save of the season Monday night in the win over the Cowboys.

Tygart, meanwhile, emerged as a valuable weapon out of the bullpen this year, posting a 3.93 ERA and a team-leading eight saves over 36.2 innings. He was dominant in SEC play during the regular season, logging a 1.91 ERA and seven saves while fanning 40 and holding opposing hitters to a miniscule .160 batting average in 28.1 innings.

Arkansas catcher Michael Turner was named the MVP of the Stillwater Regional. North Carolina left fielder Mikey Madej won the same honor with the Chapel Hill Regional. For the season, Turner is hitting .310 with nine home runs and 48 RBI.