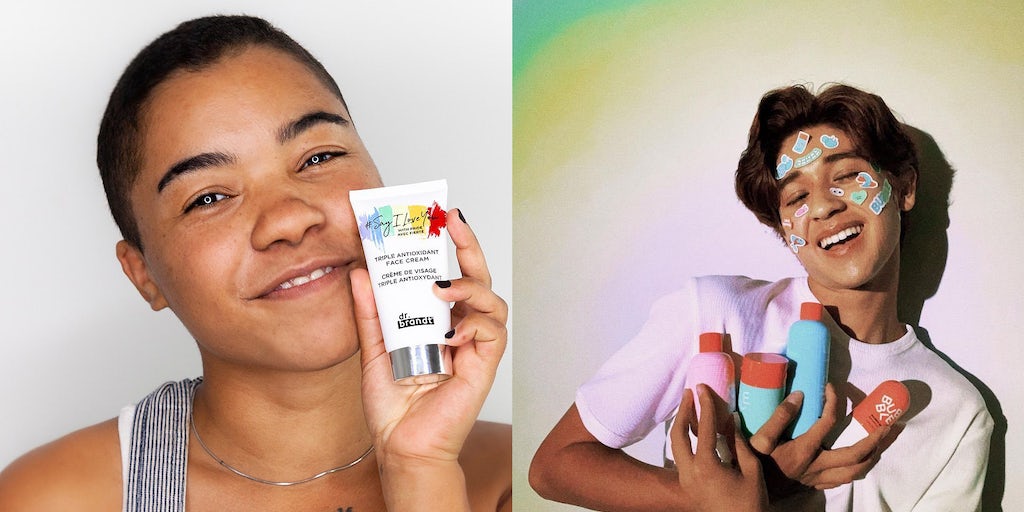 After years of aspirational, make-you-feel-bad-about yourself marketing, cosmetics and personal care brands across the board seem to be embracing a kinder, more body-positive tone in messaging.

In recent years, brands like Philosophy and Harry’s have rolled out major mental health-centric initiatives, while labels like Rare Beauty have put it at the centre of their marketing. Earlier in September, dozens of beauty companies posted on social media in support of Suicide Prevention Awareness Month. Many more are likely to show their championship of the cause on World Mental Health Day in a week, on Oct. 10.

“Nothing can rock your self-esteem like being told often that you’re not enough, so it makes a lot of sense that the beauty industry is waking up to their responsibility in this regard,” said Ruth Bernstein, chief executive at marketing agency Yard. “Some brands want to do something about it, but the question is how.”

It’s a particularly resonant message right now: when Covid-19 first struck, overnight, anxiety and burnout became a pandemic in their own right. One study published in the journal Translational Behavioral Medicine late last year found that reports of anxiety among respondents were six times higher in 2020 than in 2019. For teens, the rates are even higher, surveys show.

If you come across as being performative or inauthentic, it becomes a really big negative for the brand.

But despite numerous attempts, actually pulling off mental health-centric marketing is no easy feat for beauty brands. Today’s conscious consumers are well aware of the beauty industry’s track record in perpetuating harmful beauty ideals, disseminating photoshopped images of poreless skin and perfect, lithe bodies. Beyond that advertising, by nature, beauty companies perpetuate the idea that a person’s physical appearance is something to be improved or enhanced — the promise of doing so is why shoppers buy their products.

Considering this history, it may be difficult for beauty companies to sincerely convey their commitment to mental health.

“Consumers are a lot savvier and switched on to what’s going on in the world and they know that they’ve got a massive [number of] choices when it comes to buying products,” said Sarah Jindal, a beauty analyst at research firm Mintel. “If you come across as being performative or inauthentic, it becomes a really big negative for the brand.”

To make these efforts work, brands must show consumers — and investors — that they’ve had a real impact, which requires extensive follow through on top of financial commitment.

“The truth is, mental health is very complex … But we have to start somewhere,” said Katrina Gay, chief development officer at the National Alliance on Mental Health (NAMI). “Our end game is starting a movement, where we look for a variety of indicators, not just cash through donations but also social currency through conversation.”

Below, BoF outlines five best practices for crafting a purpose-driven campaign around mental health — one that not only garners shopper approval but also has the potential to actually make a difference.

Be Transparent About Donations

When a company wants to donate a “portion of proceeds” to NAMI, one of the largest mental health nonprofit organisations in the US, it can’t be vague. In fact, if it doesn’t disclose what percentage of a product’s ticket price will go toward the donation, NAMI may very well pass on the offer, according to Gay.

“It can’t just say ‘a percentage of proceeds’ or even ‘X percent of profit,’ because profit itself is not clear to the consumer,” she said. “We frankly do not work with brands who aren’t willing to be that transparent.”

Bubble, for instance, is a skin care brand for teens that launched late last year with a business model that entails making quarterly donations to mental health nonprofits such as Unsinkable Youth and NAMI. Rather than donating “profits,” the company sets aside one percent of total sales. This means that if a consumer spends $30 on two tubes of moisturiser, they know for sure 30 cents will toward charity.

Hope Fragrances promises the entirety of its profits of products sold at Bergdorf Goodman will go toward its nonprofit arm, the Hope for Depression Research Foundation. While the brand doesn’t break out the profit amount, it does disclose the full amount of giving: the company hopes to make at least $100,000 in donations by next fall, according to founder Audrey Gruss.

Don’t Pretend to Be the Experts

When beauty brands can align themselves with pro-mental health initiatives, it’s crucial to consult with actual mental health care professionals. Anti-ageing skin care company Dr Brandt, for instance, tapped a licensed therapist, neurologist and other medical professionals to be on the advisory council for its nonprofit arm, the Dr Brandt Foundation.

How do you approach the subject without being a mental health professional not in a one-on-one environment?

Bubble, meanwhile, partnered with online therapy platform BetterHelp to offer customers a 50 percent off promotion in their first month because the company wanted to provide actual mental health support for its customers beyond its positive messaging on social media and its product packaging.

“How do you approach the subject without being a mental health professional not in a one-on-one environment?” said Shai Eisenman, founder of Bubble. “This is why we partnered with BetterHelp.”

Be Careful With Influencers

When it comes to an issue as delicate as mental health, choosing the right face for representation can be a make-or-break factor. Mintel’s Jindal recalled Proactiv’s campaign with Kendall Jenner, which dismayed a number of consumers.

“No one saw her as a real person with real issues, and that lack of authenticity … got people to jump up and shout,” Jindal said.

In contrast, Jindal added, consumers see Selena Gomez’s cosmetics brand Rare Beauty as more authentic in its commitment to mental health — its Rare Impact Fund will go toward mental health assistance in schools — because the singer has a track record of speaking frankly about her own struggles.

Men’s personal care brand Mantl also highlights its founders’ own mental health challenges with hair loss and male pattern baldness in how it communicates to consumers, including that of co-founder Karamo Brown, who stars in the Netflix reboot of “Queer Eye.”

“This is why it was so important when Mantl launched to bring in someone who also really understood mental health, which was Karamo — he’s a trained psychotherapist and was a social worker earlier on in his career and that’s what makes him so credible in what he does,” said Peter Ricci, co-founder and chief executive of Mantl.

Consumers are quick to call out hypocrisy. One damning example was last summer’s backlash against Everlane after it shared support for Black Lives Matter. A group of anonymous former employees quickly responded, posting a now-viral document outlining multiple allegations of discriminatory behaviour motivated by race.

You’re saying these things, but what’s behind it? What are you changing effectively for the lives of your team?

“When we saw brands trying to fit in, posting the black square [last summer], that was when consumers had this very strong shift to saying, ‘You’re doing this, but what’s behind it?’ said Christopher Skinner, founder of marketing agency Schoolhouse. “The same can be said for mental health and wellness programmes. You’re saying these things, but what’s behind it? What are you changing effectively for the lives of your team?”

When building out a purpose-driven campaign, the outward message to consumers relies on an internal commitment too. This could start with something as simple as ensuring that every employee has an hour-long lunch break, Skinner said, but should also look like improved health care packages that encompass affordable therapy and wellness stipends.

Lolita Maesela is a fellow at The Business of Fashion.

Fashion Got Woke. But at What Cost?

The New Wave of Brands That Want to Make Acne Fun