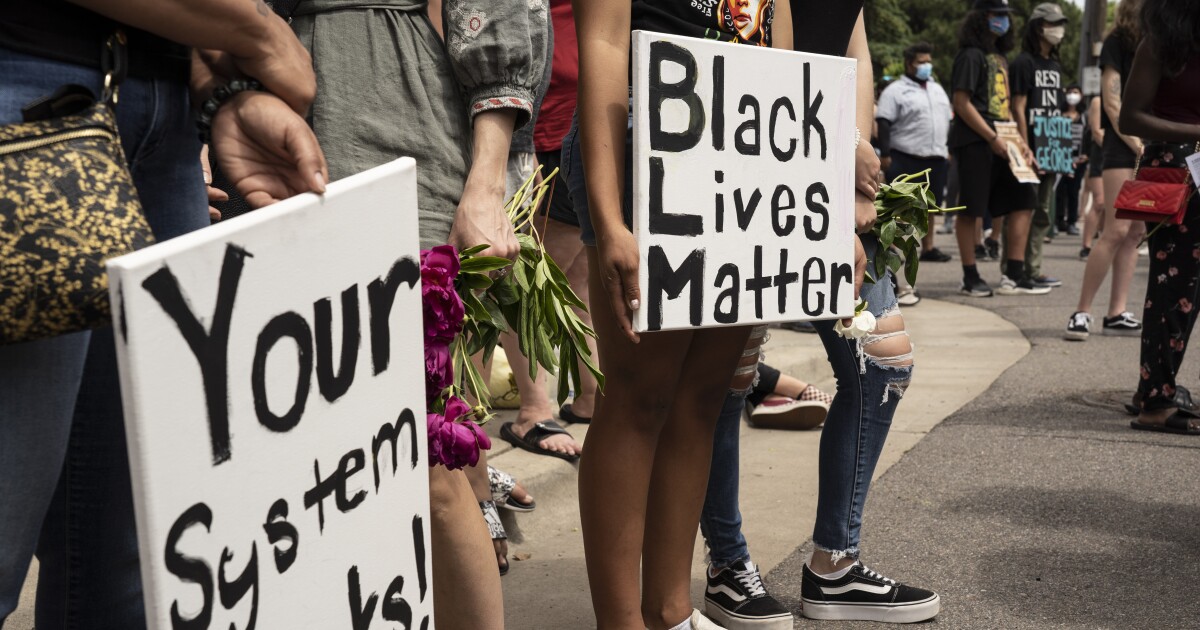 Following the killing of George Floyd, Catlan McCurdy and her husband, Sanjiv Laud, alums of the University of Minnesota Law School, started a memorial scholarship in Floyd’s name. The two lawyers wanted to do something to “counterbalance the racial inequity in this country,” McCurdy told The Minnesota Daily, the university’s student newspaper. News of the scholarship prompted more than 400 additional donors to contribute to the fund, according to The Minnesota Daily. The university’s graduating Class of 2021 chose the scholarship as its class gift.

“We thought that if we could start something at the school it would be a way to, first of all, make sure that Mr. Floyd’s name was never forgotten in the city, and also try to diversify the legal population which has historically been underrepresented in terms of minorities,” McCurdy told The Chronicle.

Brandon Redmon, the scholarship’s first recipient, enrolled in the law school this fall. A father of four and a former truck driver, he told The Minnesota Daily that he sees the award as an opportunity to “fight against racial and ethnic injustice.”

Partly located in the city where Floyd was killed, Minnesota’s flagship was at ground zero of 2020’s reckoning over racial injustice. But it wasn’t the only university that felt a call to action following the deaths of Floyd, Breonna Taylor, and Ahmaud Arbery, among others. Some colleges started renaming buildings tied to people who had supported slavery, others created diversity, equity, and inclusion offices and hired diversity officers. Hundreds of institutions made statements acknowledging the names of those who had died and a need for structural change.

But few of those statements included effective measures — like antiracism training for leaders, or the creation of DEI offices — that would lead to that change, according to a report by Naspa: Student Affairs Administrators in Higher Education and the National Association of Diversity Officers in Higher Education.

A separate analysis by the Education Advisory Board found that actions pledged by colleges “tended to be short-term and more symbolic in scope.”

Today, chief diversity officers remain dissatisfied and say institutions that have committed to fighting racism still need to do more.

“A number of institutions made declarative statements in terms of their commitment to antiracism,” said Clyde Wilson Pickett, professional-development chair for Nadohe and vice chancellor for diversity, equity, and inclusion at the University of Pittsburgh. “And so, as part of that response, our colleagues wanted to use this opportunity to think about how we could take specific action.”

Hundreds of diversity officers gathered this year for two webinars hosted by Nadohe to talk broadly about how to fight structural racism in higher education. They discovered a need for some sort of blueprint to help diversity officers carry out antiracism strategies at their respective institutions, and convened a task force. Pickett served as its chair. The result: “A Framework for Advancing Anti-Racism Strategy on Campus,” which was released on Wednesday.

Changing the system requires a disruption of ‘business as usual’ with an emphasis on eliminating bias and racism.

The framework is vast and thorough. It details 10 priority areas that colleges committed to antiracism should focus on to improve conditions for Black, Indigenous, and other students, faculty, and staff of color. The areas include institutional structure, resource allocation, curriculum and pedagogy, campus climate, and admissions and access. The framework contains strategies within each priority area where diversity officers can focus.

The report’s release comes amid continued talk by colleges of advancing the cause of antiracism.

In October, the Vermont State Colleges system adopted an antiracism pledge proposed by its student-diversity-and-inclusion task force and DEI committee. One section of the voluntary pledge states that university leaders should advocate for providing “dedicated safe spaces, support systems, and wellness resources” for “students of color and allies of students of color.”

While pledges are a step toward progress, Nadohe officials also want institutions to go deeper, by coming to terms with their pasts and how the institution of slavery might be rooted in the institution’s creation. “Higher-education systems are a complex web of practices, policies, and procedures steeped in white normativity,” the framework says. “Changing the system requires a disruption of ‘business as usual’ with an emphasis on eliminating bias and racism.”

Some universities have already taken steps in that direction.

Amherst College, in Massachusetts, has been consistently updating its antiracism plan since it was established last year. The plan includes a dredging up of the college’s ties to slavery. Carolyn (Biddy) Martin, the college’s president, said there was “no question” that slavery contributed to the wealth of Amherst. The college commissioned a steering committee to look into Amherst’s racial history, along with the provost, faculty, and student researchers.

They were, in part, inspired by similar efforts at the University of Pennsylvania and at Brown University, which released the second edition of its 2006 “Report of the Brown University Steering Committee on Slavery and Justice” last week, The Brown Daily Herald reported.

Donde Plowman, chancellor of the University of Tennessee at Knoxville, made similar pledges last year: increasing faculty diversity, recruiting more students of color, and building better relationships with law enforcement, The Chronicle’s Race on Campus newsletter reported. Tennessee even posted a list of diversity initiatives. But the university did not respond to The Chronicle’s request about updates on those initiatives.

And student activists at the University of Louisville are not satisfied with the institution’s ongoing relationship with the metropolitan police. In May, Xian Brooks, a former program coordinator of the Health Science Center Office of Diversity and Inclusion, left the university, citing the tokenization of people of color. He told The Courier Journal that the university was “incapable of being treasonous to white supremacy.”

Organizers behind Nadohe’s new document see it as a way to keep momentum behind college antiracist efforts. Paulette Granberry Russell, president of the diversity officers’ group, sees the framework as a “first step.” For institutions that have started taking steps towards racial equity on their campuses, she hopes the framework can steer them toward more progress.

When the goal is equity, institutions should be paying attention to outcomes, said Pickett, the Pittsburgh administrator.

“The improvement of sense of belonging, and how we track those things in terms of campus climate, as well as seeing increases in population and success,” he said, “are how we will know that organizations and higher-education institutions that are using frameworks like ours are having some success and making progress.”