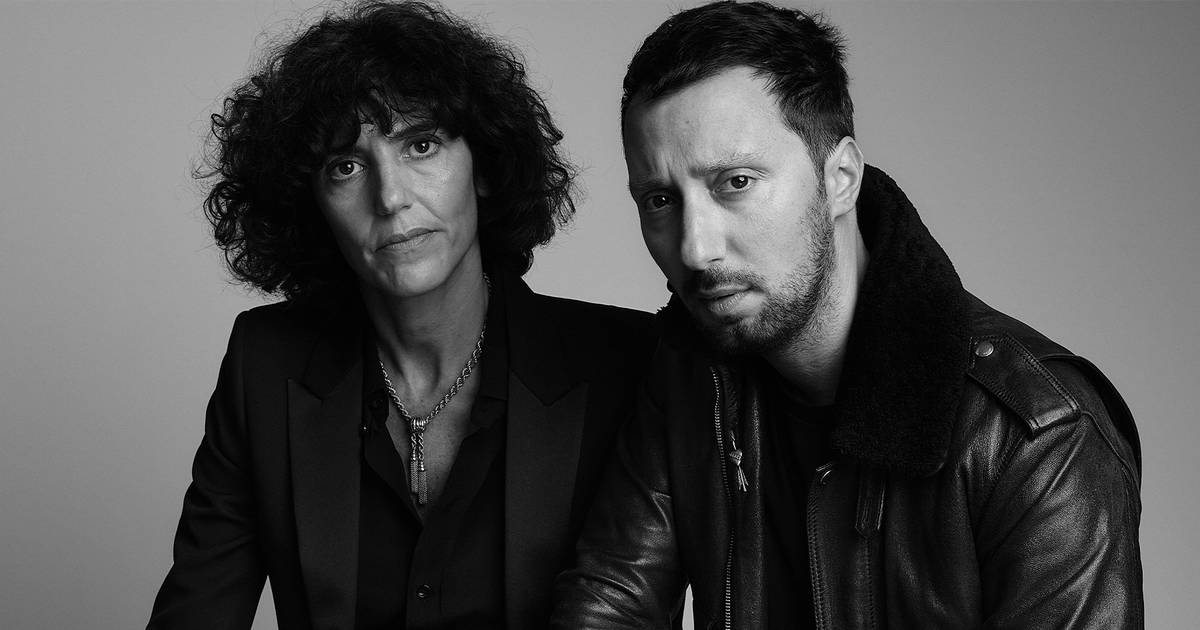 PARIS — Saint Laurent’s Fall/Winter show this March was the eighth time designer Anthony Vaccarello had shown in front of the Eiffel Tower, with each outing hammering home his message of amped-up, yet relatable Parisian glamour.

Rather than being interpreted as redundant, the show won rave reviews for its tense, cinematic presentation as well as the way Vaccarello had sublimated his iconic inspirations into something modern — adding his own subversive, Belgian spin.

Vaccarello is “finally discovering more of the provocative allure of Saint Laurent — and conveying it in his own way,” fashion critic Cathy Horyn wrote. “Vaccarello has got himself in charge of the Yves Saint Laurent aesthetic,” deploying the brand’s playbook “in his own accent, with his own taste,” added Vogue’s Sarah Mower.

The show followed months of magazine covers dominated by Saint Laurent, as almost six years into Vaccarello’s tenure fashion media seemed to be embracing his slow-burning transformation of the brand more than ever.

Since his arrival at Saint Laurent in 2016, Vaccarello has transitioned the brand from the retro, rock-and-roll-inflected positioning cultivated by his Los Angeles-based predecessor Hedi Slimane to a heightened, more squarely Parisian narrative.

While maintaining the brand’s seasonless approach — favouring evolution over revolution each season — Vaccarello has nonetheless managed to shift the brand’s focus from glitzy party dresses to daywear and tailoring and back again, perpetually twisting the bourgeois signatures of Yves Saint Laurent into something more sporty and youthful: true to the brand’s French DNA but with global, contemporary appeal.

At the same time, chief executive Francesca Bellettini’s precise approach to merchandising and distribution has helped the brand boost its commercial impact dramatically: Saint Laurent’s sales have grown by roughly 5-fold to €2.52 billion ($2.66 billion) since Bellettini joined the brand in 2013, and more than doubled since Vaccarello came aboard as creative director in 2016. Saint Laurent has grown its profits by a factor of 10 during Bellettini’s reign, with EBIT rising from €77 million in 2013 to €715 million last year.

With retail sales up by 49 percent last quarter, the brand is on track to surpass €3 billion in sales this year even as the brand works to clamp down on its exposure to wholesale, according to HSBC.

“The success lies in the consistency of our strategy,” Bellettini said during a recent interview at the brand’s headquarters in a renovated hotel particulier on Paris’ tony Rue de Bellechasse. “Everything we do aims to elevate and amplify the brand.”

An appetite for repetition (as with the Eiffel Tower background) and the more gradual stylistic evolutions on Vaccarello’s runway has helped to reinforce a consistent brand identity with consumers, as well as helping it to phase out markdowns.

“Saint Laurent has really gained with consistency,” HSBC analyst Erwan Rambourg said. “Consumers are looking for references, they’re looking for iconic products, and this is one of the most iconic French brands. They don’t need to make noise every other minute to draw you in.”

“They’ve really harnessed that Parisian chic, that luxury cool girl and wrapped it up in a way that appeals broadly,” Sam Lobban, Nordstrom’s vice president of luxury and special projects, said.

That consistency is also helping boost Saint Laurent’s bottom line, as the consistency of collections has made it easier to avoid markdowns.

“The vision of Anthony that builds on, that reinterprets constantly — as well as adding to — the icons allows us to really build a business that is profitable. Because almost nothing is obsolete,” Bellettini said.

No items are marked down before less than one whole year, and no discounting has been done through the brand’s mainline boutiques since 2017, the brand said.

Appreciation for what Bellettini and Vaccarello have built at Saint Laurent has been hard-won, however, as the brand’s evolution was gradual enough (by fashion standards) that it was sometimes easy to miss.

Saint Laurent’s success has at times been attributed to the bold-faced, monochromatic brand image and store concept put in place by previous creative director Hedi Slimane. The perception that the brand had simply been riding the wave of Slimane’s turnaround was hard to shake.

It is true that Vaccarello has often favoured the same short hemlines and sauntering, rail-thin brand of models his predecessor employed at the brand. And the sexed-up, shimmery party dresses that marked his first seasons at the brand blended seamlessly with his predecessor’s trademark skinny jeans, low-top sneakers, and Sac du Jour handbags in stores.

By the time Slimane returned to fashion at the helm of LVMH’s Celine in 2019, YSL’s business had moved on from his signature styles far more than the market realised. The Celine revamp (which has featured many similar ingredients in branding, ad campaigns and even collections as Slimane’s work for Saint Laurent) has had “no impact,” on YSL’s trajectory, Bellettini says.

Saint Laurent’s fashion week storytelling has been in constant evolution too, even amid the Eiffel tower backdrop’s frequent returns: Vaccarello’s fantasy of the Saint Laurent client as a perpetual party girl gradually morphed into a sportier daywear shopper, notably with an Autumn/Winter 2020 collection that paired checked blazers in bright hues with skintight latex trousers.

That time, fashion’s gatekeepers took notice, with the collection gracing the covers of Vogue Paris and Korea, Elle and L’Officiel.

“That show was a breakthrough,” Bellettini said, as it boosted daywear and tailoring themes that Vaccarello had already been developing in stores. Spotlighting those categories has helped make ready-to-wear the brand’s fastest-growing category, she added.

Still, it’s the quilted-leather handbags championed by Saint Laurent that are driving volumes at Saint Laurent, pushing both sales and the brand’s profitability to new heights. Bags now make up 72 percent of sales, Bellettini says.

Hit accessories like the €1,950 Niki flap tote and €1,250 Lou crossbody have been aligned with several market trends: the brand offers hands-free, crossbody versions for smart-phone wielding women; there is a robust offer of logo-driven styles at prices within reach for aspirational consumers; and their “goes with everything” black or black-and-chrome shades hit the mark for ladies on the move, who increasingly favour day-to-night looks.

And while top-end rival Chanel has opted for dramatic price hikes on its own quilted-leather bags — raising prices for its classic flap styles to $10,000 — Saint Laurent seems committed to growing through volume.

“You have to keep in mind the role of each category. The accessories are what help clients entering the brand, while the ready-to-wear is about growing in the brand,” Bellettini said. “We can raise prices, but at the same time we need to protect the entry-point.”

Recent months have seen Saint Laurent push a top-end release in its quilted-leather line, the $4,400 Icare shopper, as well as a monogrammed canvas offer including items starting at $1,050.

“What is relevant is to always offer the right balance of the price of the product and the value. That way when you launch a high-priced product, people are willing to pay,” Bellettini said. “It’s not that there’s no price resistance, there’s no brand resistance. They believe that what they’re paying for is worthwhile.”

Still, competing with Chanel on core styles like quilted crossbodies (and tweed jackets) won Saint Laurent a rare public swipe from Chanel’s fashion president Bruno Pavlovsky, who told WWD it was “sad to see a brand like that parasite another brand.” (The companies later made peace in a cryptic joint statement about their shared commitment to support creativity.)

“We all compete for the same customers, but when you talk about a quilted bag, who doesn’t have a quilted bag?” Bellettini said about the dust-up, pointing out that YSL’s envelope styles had been around since the days of Tom Ford.

A long-term focus on clienteling and nourishing its local clients has also been key to Saint Laurent’s success.

In 2020, when stores reopened after months of strict coronavirus lockdown, sales associates sent bouquets of white roses to long time customers who, in an act of self-indulgence and optimism often showed up to buy €2,100 evening gowns and €1,050 stilettos despite having little visibility on when galas and weddings might actually resume.

Those clients helped Saint Laurent’s sales get back in line 2019′s pre-pandemic levels by late 2020. Then, in 2021, as first-time luxury buyers flooded the market, the brand’s appeal with local customers in the buoyant US market pushed sales to new heights. Despite the prolonged downturn in international travel, Saint Laurent’s retail revenues grew as much as 35 percent above 2019′s pre-pandemic levels last year.

Now the brand is leaning into its acceleration in the US by expanding its stores or relocating to larger locations in San Francisco, Los Angeles, Dallas and Atlanta. In Europe, a store set to open in 2023 on Paris’ famed Avenue Champs Élysées is set to be its biggest in the world.

As sales surge, Saint Laurent is already close to hitting its mid-term target of €3 billion, it announced at an investor day for parent company Kering in 2018. It stands to reason that renewed ambitions for the brand could be announced soon, as the group plans to hold a new investor day spotlighting several of its brands in mid-June.

The luxury industry “has a very select group of megabrands, meaning at €5 billion [in sales] and beyond … Saint Laurent has the potential to join that group,” Rambourg said.