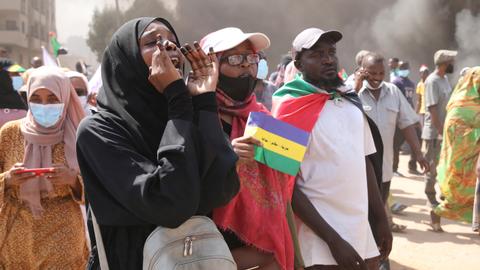 Countries and world bodies are expressing concerns over what appears to be a military coup in Sudan.

The European Union, Arab League and various world powers have expressed grave concern about what appears to be a military coup under way in Sudan.

In response, thousands flooded the streets of Khartoum and its twin city of Omdurman to protest the apparent military takeover. Footage shared online appeared to show protesters blocking streets and setting fire to tires as security forces used tear gas to disperse them.

Here’s how world leaders and bodies are reacting:

The EU calls on all stakeholders and regional partners to put back on track the transition process.

“The EU calls on all stakeholders and regional partners to put back on track the transition process,” Borrell wrote, referring to Sudan’s fragile transition from autocracy to democracy after the ouster of longtime ruler Omar al Bashir in 2019.

US Special Envoy for the Horn of Africa Jeffrey Feltman said Washington was “deeply alarmed” and indicated that a military coup would threaten American aid to the impoverished country.

“As we have said repeatedly, any changes to the transitional government by force puts at risk US assistance,” the US Bureau of African Affairs wrote on Twitter.

The Arab League also expressed “concern” over developments in Sudan.

He also urged all sides to adhere to an August 2019 power-sharing deal.