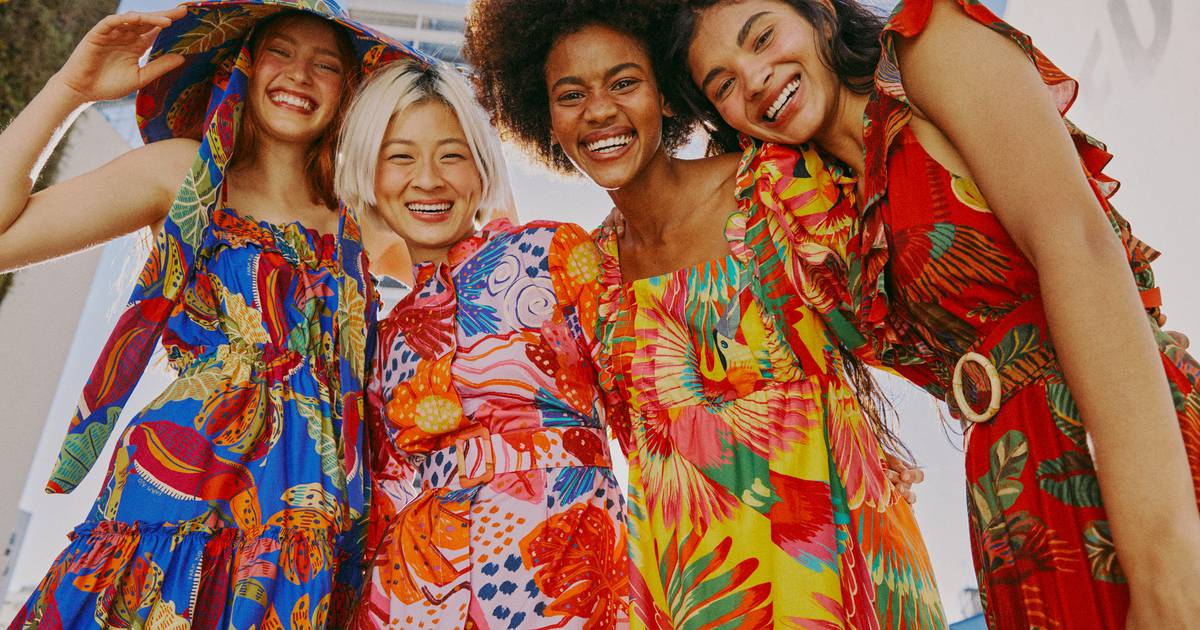 In New York City, where black is always the new black, it’s impossible to miss the bright tropical prints of Farm Rio.

Colourful and often voluminous, the dresses made by the Brazilian label have become an increasingly common sight on the streets of Manhattan and Brooklyn since the brand entered the US market with a SoHo store in 2019.

Farm Rio’s novelty is precisely its greatest strength outside of Brazil. Since 2019, its US sales grew from zero to $50 million, fuelled by a strong aesthetic and a multi-pronged distribution strategy that includes stores, e-commerce, and most critically, a robust wholesale network that includes Neiman Marcus and Nordstrom, among others.

Even during the pandemic, Farm Rio products sold “unusually well,” said Lana Todorovich, chief merchandising officer at Neiman Marcus. “The vibrancy of those prints was something our customers were craving during the pandemic … and certainly now post-pandemic.”

Farm Rio has accomplished what countless brands aspire to achieve: Make the leap from hometown hero, whether that’s Nashville, Copenhagen or Rio de Janeiro, to international sensation. It’s no easy feat. Even for a brand that’s as popular in its home country, and as well-capitalised as Farm Rio — its parent company, Grupo Soma, generated $880 million in sales last year — the barrier to global expansion is high. Before it could set up shop in North America, Farm Rio had to account for a vastly different customer base and steep competition from established American brands.

To immediately make a splash, the label dusted off an old retail strategy: physical stores and wholesale.

“The hardest part was, how do we create brand awareness with a great product but in a market that’s so saturated,” said chief executive Fabio Barreto. “Without deep pockets, we thought a lot about how we can leverage partners that already have an audience that’s loyal to them.”

Farm Rio was founded in 1997 by Marcello Bastos and Katia Barros. In 2010, it merged with fellow womenswear brand Animale to create Grupo Soma, now among the biggest apparel groups in Brazil. The brand began planning for its US debut in 2018, according to Barreto.

Seasonality was an early hurdle. In Brazil, summer weather is year-round. For Farm Rio, making the jump to the US market worthwhile meant creating fall, winter and spring products too, to ensure consistent sales. It took the company a year and a half to research the market and prepare for the launch.

Without deep pockets, we thought a lot about how we can leverage partners that already have an audience that’s loyal to them.

“When we were first studying the US market, some people would come to us and say we’re too colourful or too much, but we’ve found exactly the opposite,” said Barreto.

The hard work paid off. Sales in the US grew at an average annual growth rate of more than 200 percent. After the first year, the label’s US business was able to turn a profit last year and is now in line with the group’s overall EBIT (earnings before interest and tax) margin of 15 percent.

In the next five years, Farm Rio plans to open between 25 and 40 new stores in the US, on top of its existing location in New York City and another in Miami that opened in 2020. E-commerce currently makes up about 50 percent of US sales, according to Barreto. Wholesale accounts for 45 percent, and stores for the remainder.

Farm Rio is eyeing expansion in Europe too. It’s already testing the waters through a shop-in-shop partnership with Le Bon Marche in Paris and will open a pop-up in London’s Liberty department store later this month.

Farm Rio’s price point in the accessible luxury category — dresses cost between $200 and $300 — also contributes to its popularity among customers, according to Shea Jensen, general merchandise manager at Nordstrom. For consumers who gravitate toward mass brands, Farm Rio might be a reasonable splurge, while luxury-oriented shoppers may be drawn to the brand for its relative affordability.

The Power of Wholesale

Farm Rio had an advantage when entering a new market: its 25 years’ worth of experience and knowledge of the ins and outs of the industry. Unlike the digital native start-ups that invested everything toward reaching customers directly on social media, Farm Rio knew wholesale has to be part of the business model too.

Wholesale, meanwhile, serves not only as a source of stable cash flow but also as a way to put up free advertising. After all, retailers like Neiman Marcus and Saks Fifth Avenue reach millions of consumers. Being on their floors meant Farm Rio also had access to them.

“We thought about a strategy where we would partner with players in the market that would present the brand to their audience with their curation on it, and wholesale played a huge role in that,” said Barreto.

Farm Rio launched in the US with an exclusive partnership with Shopbop. Later, it inked deals with Saks Fifth Avenue, Nordstrom, Anthropologie and Neiman Marcus, as well as digital platforms including Net-a-Porter, Stitch Fix and Rent the Runway. Farm Rio offers an exclusive component in many of these relationships. Nordstrom, for instance, is its sole footwear account in North America.

But wholesale alone isn’t enough. As department stores struggled to compete with digital newcomers in the 2010s, many of their vendors suffered too, unable to produce new collections with their money held up by the likes of Barneys and Lord & Taylor.

That’s why its own stores have played a crucial role in Farm Rio’s efforts in building brand awareness. Buyers at Neiman Marcus, in fact, discovered the brand walking past the Farm Rio store in SoHo, drawn in by its vibrant racks and tropical buildout.

The team was “drawn to the [more than 400] prints as well as the responsibly produced fabrics,” said Todorovich. “They were like, ‘We have to carry it.’”

In addition to wholesale and retail, Farm Rio invests in collaborations — it has an ongoing partnership with Adidas — and influencer marketing, as well as some ads on Instagram and Google. The key, according to Barreto, is balance.

“We wanted to have a multichannel approach [because] the customer is everywhere,” he said. “They’re not only online but they’re walking in the streets and they’re going to department stores.”