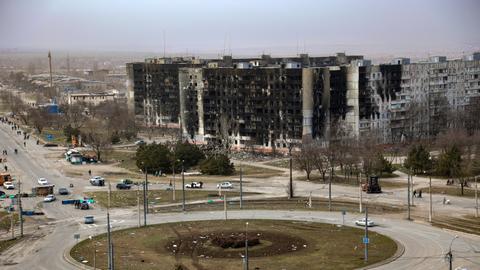 Workers digging through the rubble of an apartment building in Mariupol found 200 bodies in the basement, Ukrainian authorities have said, as more horrors come to light in the ruined city that has seen some of the worst suffering of the 3-month-old conflict.

The bodies were decomposing and the stench hung over the neighbourhood, said Petro Andryushchenko, an adviser to the mayor. He did not say when they were discovered, but the sheer number of victims makes it one of the deadliest known attacks of the war.

Heavy fighting, meanwhile, was reported in the Donbass, the eastern industrial heartland that Moscow’s forces are intent on seizing.

The Ukrainian military said Russia has fired at Ukrainian border guards in the northeastern Sumy region in the latest of a series of alleged cross-border attacks over the past few weeks.

The Ukrainian Operational Command North said on its Facebook post that eight other shots were heard Tuesday afternoon near a neighbouring village. There were no reports of any deaths.

Ukrainian President Volodymyr Zelenskyy has said Russia is using everything at its disposal in the fight for four cities in the eastern Donbass region.

“The situation in the Donbass now is very difficult,” Zelenskyy said in his address to the nation. “Practically the full might of the Russian army, whatever they have left, is being thrown at the offensive there. Liman, Popasna, Sievierodonetsk, Slaviansk – the occupiers want to destroy everything there.”

Zelenskyy said the Ukrainian army is fighting back, but “it will take time and a lot more effort by our people to overcome their advantage in the amount of equipment and weapons.” He told Ukrainians they should be proud of having held off Russia for three months in an offensive that many in Russia and the West expected to last three days.

The Russian parliament has given preliminary approval to a bill that would allow the government to appoint new management of foreign companies that pulled out of Russia after its assault on Ukraine.

According to the state news agency Tass, the new law would transfer control over companies that left Russia not for economic reasons but because of “anti-Russian sentiment in Europe and the US. Tass said foreign owners would still be able to resume operations in Russia or sell their shares.

Many foreign companies have suspended operations in Russia. Others have walked away entirely, despite their huge investments.