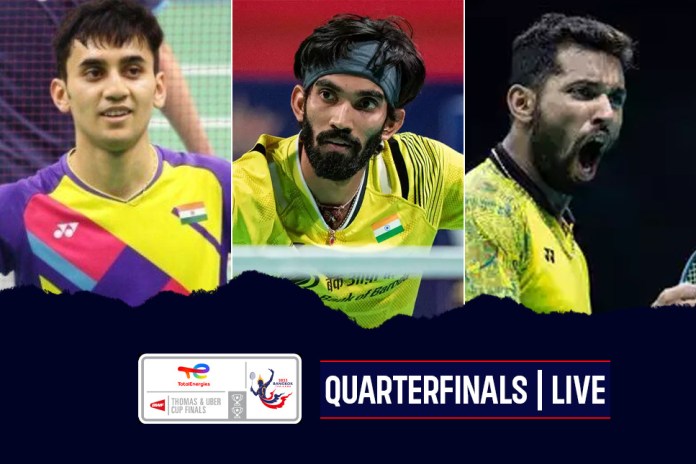 Thomas Cup Quarterfinals LIVE – India vs Malaysia LIVE: Indian men’s Badminton team scripted history on Thursday as they defeated Malaysia 3-2 in the quarterfinals of Thomas Cup 2022. With the victory, India booked a spot in the semifinals of the Thomas Cup after 43 years. Both India and Malaysia won two matches each in the tie and it was left to the last singles match to decide the winner. India’s HS Prannoy clinched a straight set victory over Leong Jun Hao to take his team to the semifinal. Follow Thomas Uber Cup 2022 LIVE Updates with InsideSport.IN

India got off to a bad start in the quarterfinals against Malaysia as Laksya Sen lost the first singles tie against Lee Zii Jia 23-21, 21-9. However the Lakshya Sen-led team made a brilliant comeback as Men’s doubles duo of Chirag Shetty and Satwiksairaj Rankireddy clinched victory and Srikanth too won his game in straight sets to give India 2-1 lead.

Lakshya Sen gave India a dismal start as he lost the first singles tie in straight sets to Malaysia’ Lee Zii Jia. The Malaysia started the game on a positive note by maintaining his lead. He kept on challenging Lakshya with an array of shots to keep the Indian on the backfoot. He took a narrow 11-10 lead by the first set break.

In the second set, Lakshya Sen was completely out of the contest as Lee Zii Jia dominated throughout the set and won the contest 21-9.

Kidambi Srikanth remains unbeaten in the tournament so far as he has won all his three matches so far in the tournament. He is likely to face 34th ranked Liew Daren in the quarterfinal. Daren has played two games so far and while he won in straight sets against USA’s Enrico Asuncion, he faced straight set defeat against Japan’s Kanta Tsuneyama in his previous match. The Malaysina will be up for a big challenge yet again, when he takes on the Indian.

HS Prannoy, who is also yet to lose a single contest in the Thomas Cup, is likely to face 46th ranked Ng Tze Yong in the quarterfinals. Tze Yong has played two matches and while he won in three sets against England’s Johnie Torjussen, He defeated USA’s Don Averia in straight sets. However against Prannoy it will be a different challenge as the Indian is in a top form at the moment.

Chirah Shetty and Satwiksairaj Rankireddy, who won the Indian Open title this year will look to get back to winning ways as they face 6th ranked pair Aaron Chia and Soh Wooi Yik in the quarterfinal. The Malaysian duo have already defeated the Indian pair in the semifinals of Asian Championship recently. The Indian duo will need to put up a strong show to stand any chance of avenging that defeat in the all-important quarterfinals.

India’s second men’s doubles pair of Dhruv Kapila and MR Arjun will be up for a tough challenge as they are likely to face 10th ranked duo Ong Yew Sin and Teo Ee Yi. The Malaysian pair played just a single match so far in Thomas Cup where they defeated USA’s Enrico Asuncion and William Hu in straight sets. They enter the contest as the favourite. The Indian duo meanwhile, defeated Germany’s Bjarne Geiss and Jan Voelker, while they were defeated in three sets by Chinese Taipei’s Lu Ching Yao and Yang Po Han.

The match is scheduled to begin at 5.30 pm IST