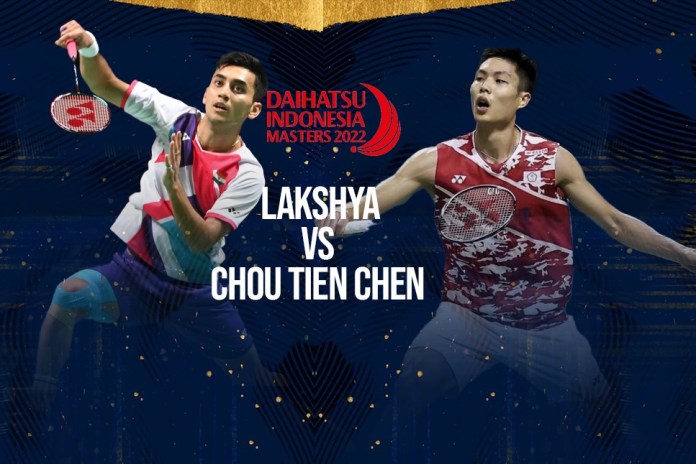 Indonesia Masters Quarterfinals LIVE – Lakshya Sen vs Chou Tien-chen LIVE: India’s Lakshya Sen and PV Sindhu are the only remaining contenders from the country in the Indonesian Masters. Both are eyeing a spot in the semifinals of the BWF 500 tournament. Lakshya Sen has taken the game against World No.4 Chou Tien-Chen to the decider. Sindhu faces Thailand’s Ratchanok Intanon in the quarterfinals. The matches will be live streamed on Voot. Follow Indonesia Masters Badminton LIVE updates with Insidesport.IN

Indians in action in Quarterfinals

9-5 to Tien-chen, Tien-chen leads continues his lead in the third set.

3-0 to Tien-chen, Tien-chen starts the third set on a positive note with a 3-0 lead.

21-12 to Lakshya Sen, Lakshya takes the second set convincingly as he takes the game into the decider.

18-11 to Lakshya Sen, Tien-chen hits in the net as Lakshya gets a seven-point lead.

9-14 to Tien-Chen, Tien-chen slowly makes a comeback as he gets three points on the trot.

11-5 to Lakshya Sen, The Indian hits an unplayable smash as he enters the interval with a six-point lead.

21-16 to Tien-Chen, Tien-chen maintains his lead and wins the set with a cross-court smash.

11-8 to Tien-chen, The Chinese Taipei players enters the break with a three-point lead.

6-6 to Lakshya Sen, Neck-to-neck battle ensues between both the players right from the start.

Lakshya vs Chou Tien-chen LIVE: World No.9 Lakshya Sen continued his good form in the Indonesian Masters as he defeated Denmark’s Rasmus Gemke 21-18, 21-15 on Thursday to move into the quarterfinals.

Lakshya Sen is looking to win his second title this year.

He started the year by winning the Indian Open title. He then finished as runner-up at the German Open as well as All England Championship. His exploits in these tournaments made him enter the Top 10 in the World rankings.

Meanwhile, Chou Tien-chen is ranked World No.4. He bowed out from the semifinals at the All England Championships this year. His next tournament was the Thailand Open, wher he made first round exit. At the Indonesian Masters, he won a three-setter against Hong Kong’ Lee Cheuk Yiu in the first round and defeated Malaysia’s Soong Joo Ven in straight sets in the second round.

Head to Head – Lakshya vs Chou Tien-chen: This will be the second meeting between both these players. They met this year at the Thomas Cup with Chou Tien Chen winning the match 21-19, 13-21, 21-17.

Sindhu vs Ratchanok LIVE: PV Sindhu entered the quarterfinals after winning a three-setter against Indonesia’s Gregoria Maria Tunjung in the second round. In the first round too Sindhu clinched a come-from-behind victory against Denmark’s Line Christophersen in a game that stretched to three sets. In the quarterfinals, she will face Thailand’s Ratchanok Intanon.

Meanwhile, Intanon enters the contest after defeating Kirsty Gilmour  21-17, 19-21, 21-15 in the second round. In the first round she defeated Indonesia’s Ruselli Hartawan in straight sets.

This will be the 13th meeting between both these players. Intanon leads the head-to-head record against Sindhu 8-4. They last met this year at the Uber Cup with Intanon winning the match in three sets. Sindhu will look to finally come good against the Thai.