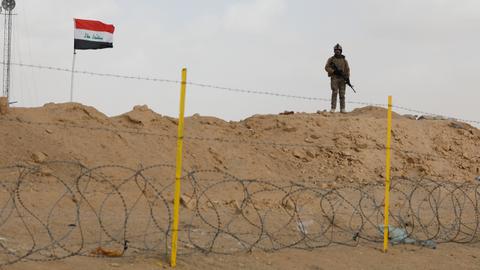 Iraq, which shares a more than 600-kilometre long border with Syria, seeks to “put a stop to the infiltration of Daesh members” into its territory, a senior officer said.

Iraq has been reportedly building a concrete wall along part of its border with Syria to stop Daesh from infiltrating the country.

In the “first stage” of construction, a wall around “a dozen kilometres (seven miles) long and 3.5 metres (11 feet) high was built in Nineveh province”, in the Sinjar area of northwest Iraq, a senior officer requesting anonymity said on Sunday.

Iraq, which shares a more than 600-kilometre long border with Syria, seeks to “put a stop to the infiltration of Daesh members” into its territory, the source added, without specifying how long the wall would eventually run.

Iraq in 2018 said it had begun building a fence along the Syrian border for the same reason.

The Syrian Observatory for Human Rights, a Britain-based war monitor, said the wall’s construction was carried out in an area facing the town of Al Shaddadi, in the south of Syria’s Hasakeh province.

Daesh overran large swathes of Iraq and Syria in 2014, declaring a so called “caliphate” before Baghdad proclaimed victory in late 2017 after a grinding campaign.

But a low-level insurgency has persisted, flaring up particularly in rural and mountainous areas between Iraq’s autonomous Kurdistan region and northern outskirts of the capital.

READ MORE: In Syria, the US needs to address the roots of Daesh, not the symptoms