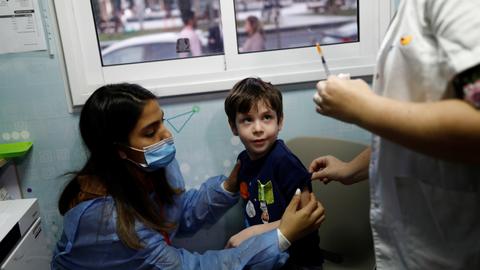 Covid-19 has infected more than 258M people and killed over 5M worldwide. Here are the virus-related developments for November 23:

Israel has began rolling out Pfizer vaccinations for 5- to 11-year-olds, hoping to beat down a recent rise in coronavirus infections.

As infections start to creep up again, Prime Minister Naftali Bennett has said the country is experiencing a “children’s wave” with about half of the recently confirmed cases among children below the age of 11, he wrote on Facebook.

Officials hope the new inoculation campaign will help bring down the numbers and perhaps stave off a new wave.

Israeli media reported low demand for the shots on the first day they were available to this age group.

Swissmedic approves Pfizer booster shots from the age of 16

Swiss drugs regulator Swissmedic has said it approved the extension of a booster dose of Pfizer-BioNTech’s vaccine to everyone aged 16 years and over.

“This clears the way for wider use of the booster vaccination. High-risk individuals can still obtain a booster dose from age 12,” Swissmedic said in a statement.

Germany’s health minister has called for further restrictions to contain a “dramatic” surge in cases as the country’s infection rate hit a record high.

The seven-day incidence rate hit 399.8, up from 386.5 on Monday, data from the Robert Koch Institute (RKI) for infectious diseases showed.

Health Minister Jens Spahn called for more public spaces to be restricted to those who we re vaccinated or recently recovered and also had a negative test, in a bid to contain Germany’s fourth wave.

Dutch police have said they arrested at least 21 people during a fourth night of unrest over Covid-19 measures, although the situation had calmed down.

Prime Minister Mark Rutte has slammed the days-long spree of “pure violence” by “idiots”, and warned that more restrictions are on the cards.

India logs slimmest rise in cases in 543 days despite festivals

India has reported 7,579 new infections, the smallest rise in one-and-a-half-years despite huge festival gatherings in recent weeks, thanks to rising vaccinations and antibodies from prior infections.

The country of 1.35 billion celebrated Durga Puja in October and Diwali this month, during which millions of people shopped, travelled and met family, mostly without masks.

Mask-wearing is nearly non-existent outside the big cities.

US warns citizens against travel to Germany, Denmark

The US Centers for Disease Control and Prevention (CDC) and the State Department on Monday advised against travel to Germany and Denmark because of a rising number of Covid-19 cases in those countries.

The CDC elevated its travel recommendation to “Level Four: Very High” for the two European countries, telling Americans they should avoid travel there, while the State Department issued parallel “Do Not Travel” advisories for both countries.

The CDC currently lists about 75 destinations worldwide at Level Four, with many European countries on the list including Austria, Britain, Belgium, Greece, Norway, Switzerland, Romania, Ireland and the Czech Republic.

The White House has confirmed that more than 90 percent of the 3.5 million federal employees covered by a presidential vaccine mandate had received at least one dose ahead of a Monday deadline.

In total, the administration has deemed that 95% of federal workers have complied with its requirements in that they have either been vaccinated, are completing vaccinations, or have a pending religious or medical exemption request, the White House said.

Officials declined to disclose the total number of fully vaccinated federal employees but said the “vast majority” of the 90 percent had received both doses.

The International Monetary Fund has said the Algeria economy is gradually recovering from Covid-19 and oil shocks in 2020 after its executive board concluded the 2021 Article IV consultations with the North African country.

“The economy is projected to recover in 2021 and 2022, but the outlook remains uncertain and challenging,” it said in a statement.

After a contraction of 4.9 percent in 2020, Algeria’s real GDP grew by 2.3 percent year-on-year in the first half of 2021 “driven by a rebound um hydrocarbon prices and production and the relaxation of containment measures”, the IMF said.

“They will also take PCR tests and will remain in quarantine until the test results come back negative,” the statement said, hours after they attended a meeting with Castex and other senior French officials.