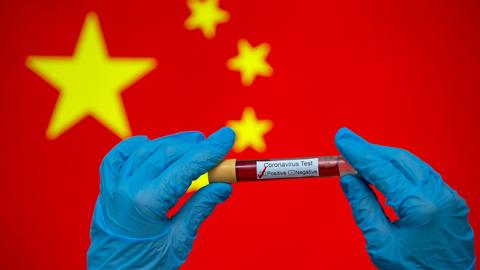 Covid-19 has infected more than 239M people and killed over 4.8M globally. Here are the virus-related developments for October 13:

The World Health Organization (WHO) has said that its newly formed advisory group on dangerous pathogens may be “our last chance” to determine the origins of the SARS-CoV-2 virus and called for cooperation from China.

The first human cases of Covid-19 were reported in the central Chinese city of Wuhan in December 2019. China has repeatedly dismissed theories that the virus leaked from one of its laboratories and has said no more visits are needed.

A WHO-led team spent four weeks in and around Wuhan earlier this year with Chinese scientists, and said in a joint report in March that the virus had probably been transmitted from bats to humans through another animal but further research was needed.

WHO director-general Tedros Adhanom Ghebreyesus has said that the investigation was hampered by a dearth of raw data pertaining to the first days of the outbreak’s spread and has called for lab audits.

The WHO on Wednesday named the 26 proposed members of its Scientific Advisory Group on the Origins of Novel Pathogens (SAGO).

The Pan American Health Organization (PAHO) has said that Covid-19 cases are dropping overall in North America but remain high in the American Midwest, Alaska, and Canada’s Northwest Territories, where infection rates are 10 times the national average.

Infections are also dropping across South America, though cases are up in the greater Caracas area of Venezuela, and in parts of Chile’s southernmost regions.

In the Caribbean, Barbados is reporting the highest number of Covid cases and deaths since the pandemic started, with a five-fold increase in Covid infections over the last month, PAHO said.

The regional branch of the World Health Organization called for concerted action in the Americas to help every country reach the WHO’s vaccination coverage target of 40 percent of their population by the end of this year.

India has no plans for booster dose

India currently has no plans to give booster doses as some nations have begun doing, the government’s chief Covid-19 advisor said Wednesday as the country nears the milestone of one billion vaccine injections.

Doctor Vinod K. Paul said meanwhile with the country’s vaccine makers ramping up production and domestic needs diminishing, India should be able to resume being a major exporter of jabs from next year.

More than 15 countries worldwide have begun issuing third doses of coronavirus vaccines to older citizens, including in Israel and in European Union nations such as France, Italy and Germany.

But Paul, part of the Indian government’s advisory body NITI Aayog, said there is no clear guidance on whether a third dose is necessary, including from the World Health Organization.

“As of now we do not have a recommendation for a booster bump-up dose,” Paul told reporters, adding however that the government would “continue to watch this space very carefully”.

His comments came with the number of vaccine doses administered in India set to hit one billion in the coming days, with some 75 percent of those eligible receiving one shot and around 30 percent double vaccinated.

India is the world’s largest vaccine producer but the country halted exports of Covid jabs earlier this year to focus on its domestic needs after a devastating infections surge overwhelmed hospitals.

The data was submitted by the developer, the Gamaleya Institute, to medical website medRxiv ahead of a peer review and based on 28,000 participants who received a dose of Sputnik Light, compared with a control group of 5.6 million individuals who were not vaccinated, it said.

The data comes as Russia battles soaring infections and hesitancy about vaccines at home, while struggling to compete with more established vaccines developed by Pfizer, Moderna and AstraZeneca which are each making hundreds of millions of doses.

Spike in extreme poverty inevitable due to insufficient aid in Africa

Most households in Africa have received no support despite many African governments introducing measures such as cash transfers and food assistance programs to combat rising poverty and hunger brought about by the Covid-19 pandemic, a global rights group said.

The pandemic highlighted the need for African governments “to strengthen social protection systems” as, according to World Bank estimates, the crisis push 29 million more Africans into extreme poverty by the end of this year, according to a report by Human Rights Watch (HRW).

Some countries have discontinued the assistance programs, leaving thousands helpless and suffering.

“The Covid-19 crisis has wreaked havoc on the livelihoods of millions of households across Africa, leaving families hungry and desperate for help,” said Mausi Segun, Africa director at HRW.

“African governments should urgently invest in the social protection systems needed to ensure that Africans can endure the pandemic’s devastating economic impact with dignity.”

Russia has reported a record daily rise in coronavirus-related deaths for the second day running, amid a surge in Covid-19 cases and deaths that has led the Kremlin to demand that authorities speed up the pace of vaccinations.

Russia’s coronavirus task force reported 984 coronavirus-related deaths, the highest single-day toll since the start of the pandemic, as well as 28,717 new infections in the last 24 hours.

Ukraine has registered 471 coronavirus-related deaths over the past 24 hours, approaching the record daily toll of 481, which was reported on April 7, health ministry data showed.

Ukraine registered 16,309 new coronavirus cases over the past 24 hours. It reported a total of 2.59 million virus cases and 59,523 deaths since the start of the pandemic.

US to open land borders to vaccinated travelers in November

The United States will open its land borders with Mexico and Canada in early November to non-essential travelers who are fully vaccinated against Covid-19, a senior White House official announced.

The official said the administration would give the “precise date very soon” – both for land crossings as well as international air travel, which would be timed to “go together.”

The United States had already announced in September that it would lift bans in November on all vaccinated air passengers who undergo testing and contact tracing.

In an effort to slow the spread of the coronavirus, US borders were closed in March 2020 to travelers coming from the European Union, Britain and China, with India and Brazil added to the list later.

Overland visitors from Mexico and Canada were also banned.

An army general who aligned with Venezuela’s late Hugo Chavez but later broke ranks with the socialist strongman and spent years as a prominent political prisoner has died of Covid-19 while in custody, officials said.

“We regret the death of Raul Isaias Baduel from cardiorespiratory arrest as a consequence of the virus,” prosecutor general Tarek Saab posted on Twitter.

Baduel’s family said they learned of his death via Twitter.

Shopworkers, tourist guides and barbers are among dozens of groups who must get Covid-19 shots to work in Australia’s Northern Territory, officials announced, unveiling one of the world’s most far-reaching vaccine mandates.

Expressing concern at low coronavirus jab rates in some communities, the Territory’s chief minister Michael Gunner announced “anyone serving the public at work will have to be vaccinated”.

The vast Northern Territory stretches from tropical Darwin on the Timor Sea to the dusty Outback settlements of Alice Springs and Uluru – an area three times the size of Spain.

People who received Johnson & Johnson’s Covid-19 vaccine will have a stronger neutralising antibody response if they get an mRNA shot as the second dose, Axios reported, citing a person who has seen data collected by the US National Institutes of Health (NIH).

J&J has asked the US Food and Drug Administration (FDA) to approve a shot of its own single-dose vaccine as the booster dose.

The FDA’s advisers are set to consider the need on Friday.

The NIH will present the mix-and-match data to the FDA panel on Friday, Axios said.

The Boeing Co. has told employees they must be vaccinated against Covid-19 or possibly be fired.

The Seattle Times reports the deadline for workers at the aerospace giant is December 8.

“Compliance with these requirements is a condition of employment,” states a Boeing internal presentation from Tuesday viewed by the newspaper. “Employees who are unable to meet these requirements … may be released from the company.”

Employees can request exemptions “due to a disability or sincerely held religious belief.” Any employee granted such an exemption will have to “undergo frequent testing for Covid-19” and be ready to “present a negative test result upon request.”

The policy will apply to roughly 125,000 US-based employees company-wide, with about 57,000 of those in Washington state.

Russia to test Covid-19 vaccine in form of nasal spray

Russia will test a nasal spray form of its Sputnik V vaccine against Covid-19 among adult volunteers, according to a state document, as the country struggles to rein in rising numbers of infections and deaths.

Russia was quick to develop and launch its Sputnik vaccine when the coronavirus pandemic struck last year, but take-up has been slow, with many Russians citing distrust of the authorities and fear of new medical products.

The nasal spray is to be applied in two doses in a clinic in St Petersburg, according to the document published on the state register of medicines, which did not provide the planned timing of the clinical tests.

President Vladimir Putin said Russia needed to speed up its vaccination campaign against Covid-19 as the country recorded its highest single-day death toll since the start of the pandemic.

Russian authorities said in June it a nasal spray vaccine suitable for children aged 8-12 had been tested and the plan was to launch the new product in September.

New South Wales could ease more
restrictions in Sydney a week earlier than planned on October 18 as
Australia’s most populous state races towards its 80 percent double-dose vaccination target, the government said.

The southeastern state is expected to hit the mark over the
weekend, beating forecasts, and officials previously promised to
relax further restrictions on vaccinated residents on the first
Monday after reaching that milestone.

“If we hit 80 percent, we’ve always said it will be the Monday
following,” state Premier Dominic Perrottet told ABC Radio.

“We
will have this discussion with our team on Thursday and we will
make a decision to be announced on Friday.”

Retail stores, pubs, and gyms can allow more vaccinated
patrons when inoculation reaches 80 percent. Mandatory masks will not
be required inside offices and nightclubs can reopen for seated
drinking, while weddings can have unlimited guests.

Sydney’s more than 5 million residents came out of a nearly
four-month lockdown on Monday after the 70 percent vaccination target
was reached, with state officials promising a phased easing of
remaining restrictions after vaccination rates reach 80 percent and 90 percent.

Mexico’s Health Ministry has reported 546 more deaths due to Covid-19, bringing the country’s overall number of fatalities to 282,773.

A US judge in Texas has temporarily restrained United Airlines from placing any employee on unpaid leave who receive religious exemptions from the company for Covid-19 vaccinations until October 26.

The Judge also temporarily restrained the airline from denying any late requests for religious or medical accommodations.