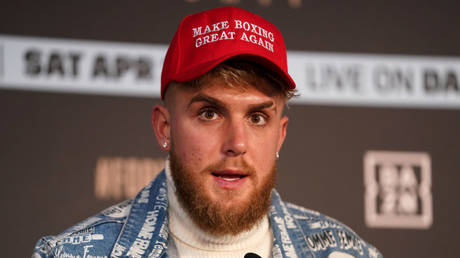 Jake Paul and Eddie Hearn agreed the bet ahead of the Katie Taylor vs. Amanda Serrano fight in Madison Square Garden

Jake Paul and Eddie Hearn have agreed to a $1 million wager ahead of Saturday’s historic world title showdown between pound-for-pound greats Katie Taylor and Amanda Serrano in New York City.

The fight, which is being billed as the biggest in the history of women’s boxing, has captivated the attention of the combat sports media as the multiple-time world and European champion Taylor, who is also the undisputed lightweight champion of the world and former Olympic champion, takes on the seven-weight world champion Serrano in what is expected to be a sold-out Madison Square Garden.

And both promoters involved are keen to back their respective fighters.

Eddie Hearn, the silver-tongued British promoter who represents Irish icon Taylor, has been matched every step of the way by boxing neophyte Jake Paul, whose Most Valuable Promotions company represents Serrano – and at Thursday’s press conference in the Hulu Theater in New York, Paul was keen to offer one of his now infamous wages ahead of the contest.

“I’ve got a bet for you, Eddie,” Paul said, cornering Hearn in front he watching reporters.

“I’m not having a tattoo,” Hearn shot back, referencing the tattoo that Paul forced previous knockout victim Tyron Woodley to get.

“I’ll bet you all the jewelry that I’m wearing right now that Amanda wins the fight,” said Paul.

Hearn then launched a knockout blow of his own: “I was hoping to bet for a lot more than that. I mean, ten grand’s not a lot.”

Paul, whose ego might have been bruised slightly, was keen to stand his ground and quickly raised the stakes to $500,000 before Hearn doubled it to a million and the pair shook hands on the big-money bet.

The oddsmakers, for now at least, are backing Paul’s fighter Serrano who is the marginal favorite to win the fight. Taylor, though, has never truly met her equal in either her amateur or professional careers as she has taken on all comers to earn the title of the greatest female fighter in history.

That title will be well and truly tested on Saturday night in a bout being heralded as the biggest fight – male or female – of 2022.

But judging by the nature of the bet, presumably designed by Paul as an extra layer of promotional nous by the man who has become an expert at promoting his own brand, both he and Eddie Hearn might well be watching the fight on Saturday through anther lens entirely.

Paul was also keen to add one more caveat.

“When Amanda wins, I’m giving your million dollars to her,” he said.