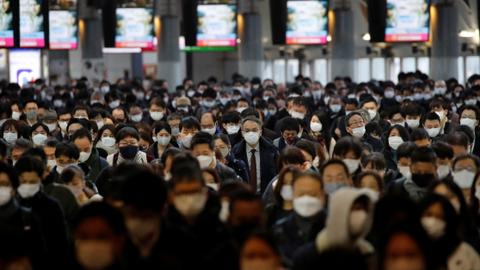 Covid-19 has infected more than 331M people and killed over 5.5M worldwide. Here are some of the latest coronavirus-related developments:

According to the country’s health authorities, Japan reported more than 26,000 virus cases today, the highest through the pandemic which began in December 2019.

Pakistan has seen a 30 percent spike in mental illnesses caused by the coronavirus in recent months, recent surveys and health specialists said.

The latest survey conducted by the Sindh Mental Health Authority, a state-run government organisation that provides mental health services in southern Sindh province, showed that depression and suicidal thoughts are the major problems developed among coronavirus patients or even those who have recovered.

Senator Karim Khawaja, who heads the mental authority, told Anadolu Agency that around 40 percent of the 1,500 survey respondents have report

China has urged people to wear masks and gloves when opening mail, especially from abroad, after authorities suggested the first case of the Omicron coronavirus virus variant found in Beijing could have arrived via a package from Canada.

Authorities vowed to step up disinfection of overseas mail and are insisting postal staff handling it are fully vaccinated.

The precautions come less than three weeks before the capital opens the Winter Olympic Games and as several cities work to stamp out new outbreaks of coronavirus infections.

Hong Kong to cull 2,000 hamsters as some test Covid-positive

Hong Kong authorities said that they will cull some 2,000 hamsters after several of the rodents tested positive for the virus at a pet store where an infected employee was working.

Even though authorities acknowledged that there is “no evidence” that pets can transmit the coronavirus to humans, as a precautionary measure, customers who had purchased hamsters from the affected store after January.

The data showed 102 virus cases were detected in Henan, 18 in northern Tianjin city while one each case was recorded in capital Beijing and northwestern Shaanxi province.

Australia has suffered its deadliest day of the pandemic as a fast-moving Omicron outbreak continued to push up hospitalisation rates to record levels, even as daily infections eased slightly.

Australia is dealing with its worst outbreak, fuelled by the Omicron variant of the coronavirus that has put more people in hospitals and intensive care than at any time during the pandemic.

“Today, is a very difficult day for our state,” New South Wales Premier Dominic Perrottet said during a media briefing as the state reported 36 deaths, a new pandemic high.

Unvaccinated people over 60 years of age in Greece will be fined, local media have said, in bid to raise relieve pressure on the country’s healthcare system.

The fine will be $57) for January and $114) from February to raise inoculation levels and relieve pressure, local daily Kathimerini reported.

Ninety percent of people over 60 have been vaccinated or have booked a vaccination appointment since the fine was announced, the report added,

However, an estimated 300,000 people could face a penalty.

In the country, medical professionals who have not received a shot against Covid-19 have already been suspended and face the prospect of being sacked if they fail to comply with vaccination rules.

Hong Kong police have said they have arrested and charged two former flight attendants over allegations they broke the city’s coronavirus rules.

The statement, which was published late on Monday, did not name the airline but the announcement comes after Cathay Pacific said in January it had fired two aircrew who were suspected of breaching Covid-19 protocols.

Police said the two had returned to Hong Kong from the United States on December 24 and 25 where they had “conducted unnecessary activities” during their home isolation period.

They both later tested positive for the fast-spreading Omicron strain.

Fourth doses of the Pfizer and Moderna vaccines against Covid-19 are only “partially” effective for the Omicron variant of the virus, the authors of an Israeli trial have said.

A team from Sheba Medical Center near Tel Aviv began conducting a trial in December on fourth doses of coronavirus vaccines, inoculating 154 hospital personnel with Pfizer jabs and 120 other volunteers with Moderna doses.

Brazil has had 74,134 new cases of the novel coronavirus reported in the past 24 hours, and 121 deaths from Covid-19, the Health Ministry has said.

The South American country has now registered 23,074,791 cases since the pandemic began, while the official death toll has risen to 621,166, according to ministry data.

Brazil’s Covid-19 death toll is the world’s third deadliest after the United States and Russia, according to Reuters calculations.

Mexico has reported 59 new deaths from Covid-19, bringing the official death toll in the country since the coronavirus pandemic began to 301,469.

Poland is in the fifth wave of the Covid-19 pandemic, the health minister has said, adding that he expected the country to report over 20,000 daily cases on Tuesday and a peak of 60,000 in mid-February.

“In today’s results, which we will report in full tomorrow, there is a risk that the barrier of 20,000 infections will be broken,” Adam Niedzielski told a news conference.