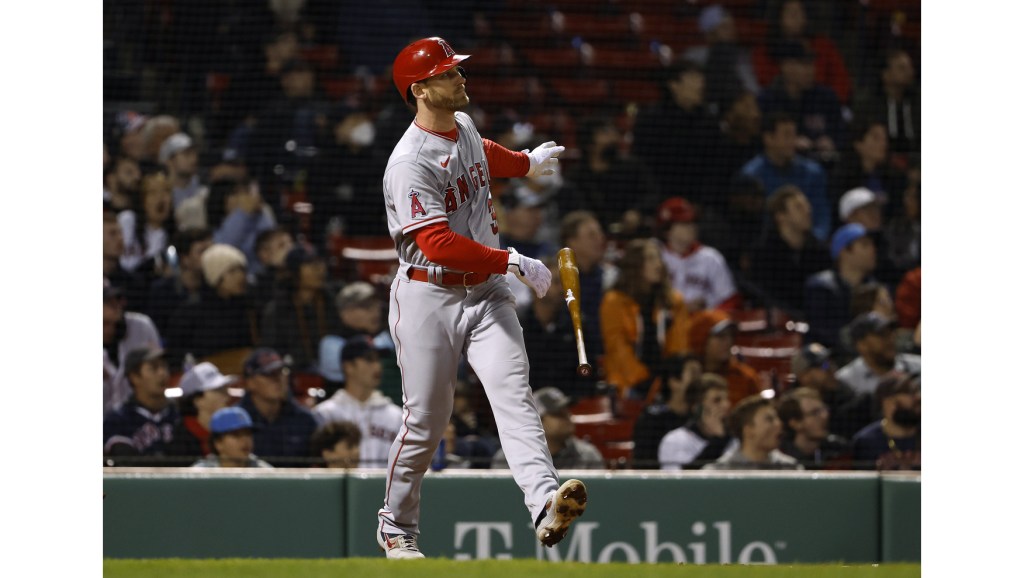 BOSTON — Although the Angels don’t often let Jared Walsh face left-handed pitchers, he’s had some of his biggest moments in the big leagues against lefties.

Walsh delivered the game-tying hit with two outs in the ninth inning against lefty Jake Diekman, and then he and Taylor Ward hit home runs in a six-run 10th to lift the Angels to a 10-5 victory over the Boston Red Sox on Wednesday night.

It was the third time the Angels had tied the score, including Max Stassi’s two-run homer in the fifth and Anthony Rendon’s solo homer in the seventh.

They finally took their first lead in the 10th.

Stassi, the automatic runner, was still at second with two outs in the 10th, but Ward then crushed a drive over the Green Monster in center field, his sixth homer of the season.

The Angels didn’t stop there. Mike Trout singled, Shohei Ohtani walked and Anthony Rendon hit one off the wall, driving in a run. Walsh then blasted one over the wall, turning the tight game into a rout.

That allowed the Angels to save closer Raisel Iglesias, instead using Jimmy Herget to finish it off in the bottom of the 10th.

It was a satisfying end to a night that started in a disappointing familiar fashion. After the Angels were shut out in losses on Monday and Tuesday, they didn’t even have a hit until the fifth inning.

Walsh doubled and then Stassi blasted a homer to tie the score, 2-2.

The score was tied again when Aaron Loup, the Angels’ most dependable reliever of the young season, gave up a homer to Xander Bogaerts in the bottom of the eighth.

That brought former Angels closer Hansel Robles in to try to finish it for the Red Sox in the ninth.

Robles issued one-out walks to Trout and Ohtani, but then he got Rendon on a flyout to get the Angels down to their final out.

Boston manager Alex Cora then pulled Robles in favor of Diekman, to take advantage of the first baseman’s issues against lefties.

Walsh fouled off three 3-and-2 pitches before knocking the game-tying hit.

Right-hander Ryan Tepera got the game to extra innings by pitching a scoreless ninth, with a strikeout-caught stealing double play ending it.

By the time the Angels put the game away in the 10th, the start for lefty Reid Detmers was easily forgotten. Detmers gave up three runs in 4-2/3 innings, all of them driven in by Boston leadoff hitter Trevor Story.

In the third, Detmers hung a curveball that Story yanked into left field, driving in two. In the fifth, Detmers left a slider at the thighs and Story whacked it off the Green Monster.

Otherwise, his biggest problems were a couple of momentary lapses of control. He walked the No. 8 and No. 9 hitters to lead off the third, just before Story’s first double. Detmers had a legitimate gripe about the strike zone of plate ump Pat Hoberg on the second walk, to Christian Arroyo.

Detmers was in line for a loss when he left, trailing 3-2, but Rendon took him off the hook with his homer.

More to come on this story.