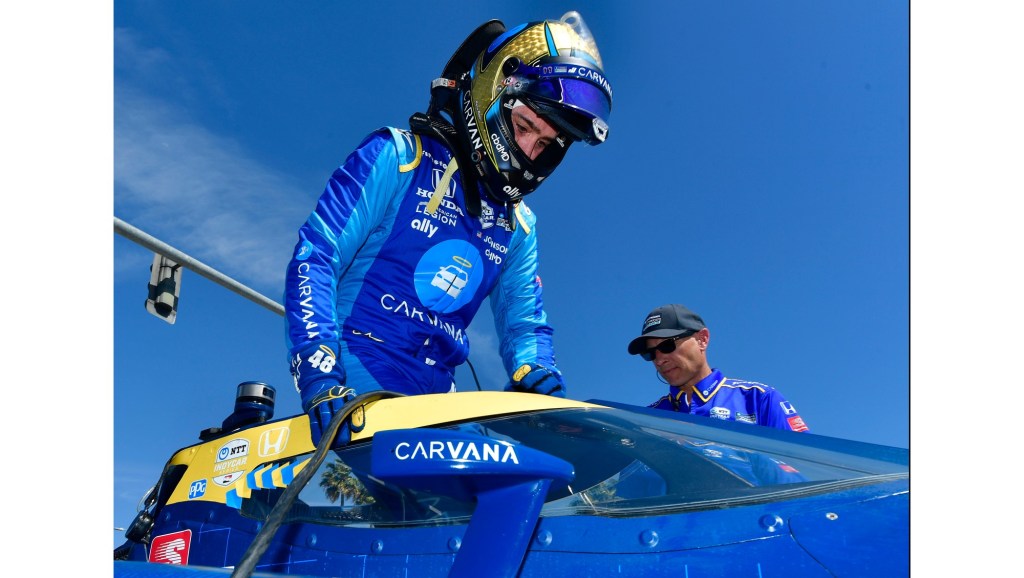 LONG BEACH — NASCAR legend Jimmie Johnson in 2021 raced for the first time in IndyCar. The season wasn’t a rousing success, as his best finish in 12 races was 17th – at Laguna Seca and the Acura Grand Prix of Long Beach in the final two races of his rookie season.

Don’t look now, but Johnson might be figuring out the car and the tracks. In this season’s second NTT IndyCar event, Johnson finished sixth at the XPEL 375 in Forth Worth, Texas. He was 23rd in the season opener in St. Petersburg, Florida.

“Texas went really well,” said Johnson, who won seven NASCAR Cup series titles, including five in a row from 2006-10, for Hendrick Motorsports. “Granted, it was an oval and I have high expectations for myself on ovals. Road and street, I still have a long way to go. There is no way around it.

“It’s a very unique skill-set. These cars are very different than what I grew up racing, but I’m so happy to be here and I look forward to the challenge.”

Johnson tested on two ovals in 2021 but did not run in any.

Johnson will try his luck again this Sunday in the main event on the streets of Long Beach. He learned a tough lesson at the 2021 event, which was run in September instead of April because of the coronavirus pandemic.

“Just how little grip there is around this track,” said Johnson, now with Chip Ganassi Racing. “No one really talked about the roughness and the low grip. Everybody talked about Detroit and Nashville. I came here thinking, ‘Oh, nobody’s really mentioned it, must be a high-grip, smooth track.’

“My eyes were wide open after the completion of my first lap. I couldn’t believe just how rough and challenging the grip level is around here, so just knowing that piece is going to be very helpful moving into today’s practice.”

Johnson spoke to reporters Friday, about three hours ahead of the first official practice of the weekend.

Yes, the sixth-place finish at Texas did come on an oval, but Johnson believes that experience could help him on street and road courses.

“Totally, it felt great,” said Johnson, 46. “I think going those speeds, feeling those G-forces will have added effects for me on street and road courses. Things come at you so fast on an oval, going that speed, that I’m hopeful it will just slow down the experience I have on street and road courses and recalibrate my body to really know what the cars are capable of.”

Indeed, going from stock cars to open-wheel racing is not easy, especially for someone in his mid-40s. But Johnson seems to be getting more of a feel for things.

He was asked about his comfort level in an Indy car at this time.

“Way more comfortable than my first time,” he said. “Not where I want to be, but I’ve taken a lot of big chunks out of the deficit that I’ve had. Now, I’m getting to the tough part, though.

“The small bit that’s left is really the area that takes years to refine and get right, just the subtleties of the car and the tracks.

“But I’m up for the challenge. I’m enjoying myself.”