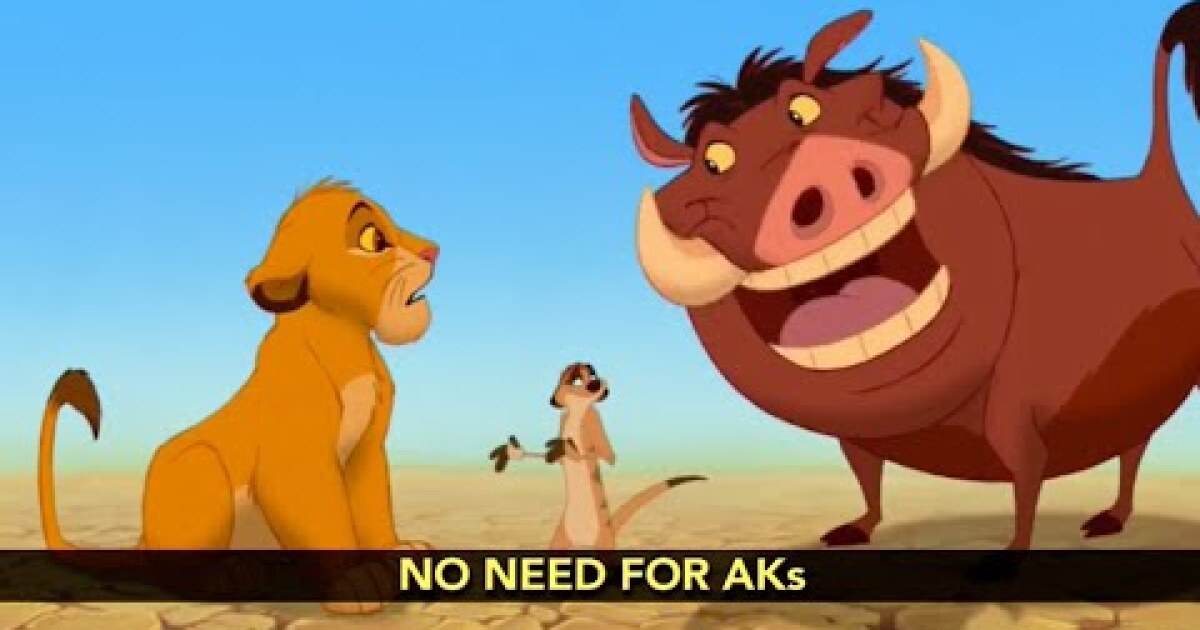 On Wednesday’s episode of “Late Night,” Stephen Colbert tapped some of his animal friends from “The Lion King,” Timon and Pumbaa, to explain why military-style weapons repeatedly used in mass shootings are not necessary to hunt game.

To the tune of their “Lion King” duet “Hakuna Matata,” the animated meerkat and warthog begged those defending civilian access to assault rifles to “just shoot us with shotguns.”

“What a logical phrase,” they sang. “Or a bow and arrow / No need for AKs! / Our hides are furry / We are not armored tanks / Tie us to train tracks / Hook us on crack / Or shoot us with shotguns.”

The “Lion King”-themed PSA comes less than a month after an 18-year-old legally purchased and used an AR-15-style rifle to massacre 19 children and two teachers at Robb Elementary School in Uvalde, Texas. Another 18-year-old is accused of using the same type of gun to kill 10 people at a grocery store in Buffalo, N.Y., less than two weeks before.

Shortly after the tragedy in Uvalde, Republican Sens. Bill Cassidy of Louisiana and John Thune of South Dakota attempted to justify legal access to semiautomatic rifles by rattling off various kinds of animals people might want to shoot with them. Colbert rolled the tape of the senators making their case for the weapons before Timon and Pumbaa provided their animal-centric rebuttal in song.

Also on the late-night TV circuit Wednesday, President Biden spoke with Jimmy Kimmel about the gun control debate, which has ramped up in the wake of the shootings in Buffalo and Uvalde.

Earlier in the day, Kimberly Rubio — the mother of fourth-grade student Lexi Rubio, who was killed at Robb Elementary — told Congress that “somewhere out there is a mom listening to our testimony thinking, ‘I can’t even imagine their pain,’ not knowing that our reality will one day be hers, unless we act now.”

Hours later, the House passed a bill that would raise the age requirement for purchasing a semiautomatic rifle and prohibit the sale of ammunition magazines with a capacity of more than 15 rounds. But the legislation — passed by a mostly party-line vote of 223-204 — is unlikely to be approved by the Senate.

“Here’s what has to happen,” Biden told Kimmel. “You’ve got to make sure that this becomes a voting issue. … I mean, ‘What you say on those things is going to determine how I’m going to vote for you.’ It should be one of those issues.”

Asked by Kimmel if he would consider issuing an executive order to enforce stricter gun control legislation, Biden said he wouldn’t because he doesn’t have that authority.

“I have issued executive orders within the power of the presidency,” Biden said. “I don’t want to emulate [former President] Trump’s abuse of the Constitution.”

“If we do the same thing [Republicans] do, our democracy would literally be in jeopardy,” he added.