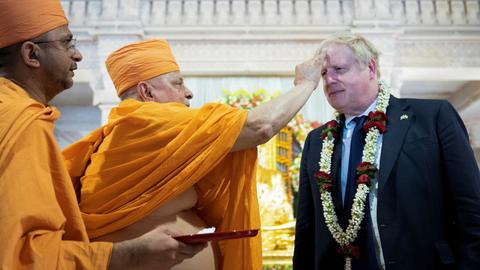 British PM Johnson will discuss boosting trade and security ties with the South Asian country that buys more than half of its military hardware from Russia.

Britain is set to offer
India know-how to build its own fighter jets and a licence for
faster deliveries of defence equipment when the prime ministers
of the two countries meet on Friday, as the West tries to wean
India away from Russia.

In his first visit to New Delhi as prime minister, Boris
Johnson will discuss with Narendra Modi boosting trade and
security ties with the South Asian country that buys more than
half of its military hardware from Russia.

“The world faces growing threats from autocratic states
which seek to undermine democracy, choke off free and fair trade
and trample on sovereignty,” Johnson said in a statement after
visiting Modi’s home state of Gujarat on Thursday.

“The UK’s partnership with India is a beacon in these stormy
seas. Our collaboration on the issues that matter to both our
countries, from climate change to energy security and defence,
is of vital importance as we look to the future.”

He was expected to discuss “support for new Indian-designed
and built fighter jets, offering the best of British know-how on
building battle-winning aircraft”, the statement said.

Former colonial ruler Britain will issue a so-called open
general export licence to India to shorten delivery times for
defence items. Currently, only the European Union and the United
States have such a licence, according to Johnson’s spokesperson.

In an attempt to move India away from Russia, the United
States has also offered more defence and energy sales to New
Delhi. Despite pressure from the United States, Modi’s
government has refused to condemn Russia’s offensive on Ukraine
except for calling for an end to violence.

India has also continued to buy cheap Russian oil, reasoning that
European countries were doing the same and in much greater
quantities.

Nevertheless, Modi has said the Ukraine assault has raised the
need for India to increase its domestic production of defence
equipment. India faces a superior Chinese army and Pakistani military at their disputed
Himalayan border in Kashmir.