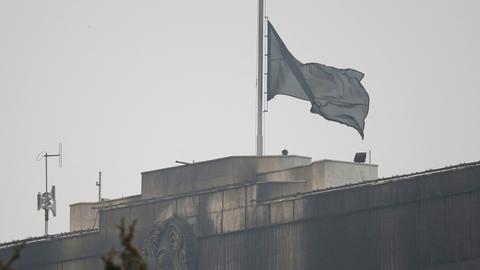 Kazakhstan President Tokayev has accused foreign fighters from Central Asian countries and the Middle East of striving to create a “zone of controlled chaos” in his country.

Kazakhstan President Kassym-Jomart Tokayev has said that militants from Central Asia, Afghanistan and the Middle East were behind violence that hit the country last week.

“I have no doubt that it was a terror attack,” Tokayev told European Council President Charles Michel by phone, the presidency reported on Monday.

Tokayev said the attack was “well organised” and involved “foreign fighters” who attempted to create a “zone of controlled chaos” in order to seize power.

Nearly 8,000 people were detained by police during protests that descended into violence last week and marked the worst unrest the former Soviet nation has faced since gaining independence 30 years ago.

Monday was declared a day of mourning for the victims of the violent unrest, which the Health Ministry says killed 164 people, including three children.

Kazakh authorities have until now struggled to provide a clear and full picture of the unrest.

On Sunday, the information ministry retracted a statement that said more than 164 people had died in the unrest, blaming the publication on a “technical mistake”.

Both ministers “stressed their concern about the intervention of external forces, including the participation of foreign mercenaries in attacks on civilians and law enforcement officials,” the Russian foreign ministry said in a statement.

Tokayev told Michel that CSTO troops were in Kazakhstan only to protect strategic facilities.

“They will remain in Kazakhstan until the situation fully stabilises,” Tokayev added.