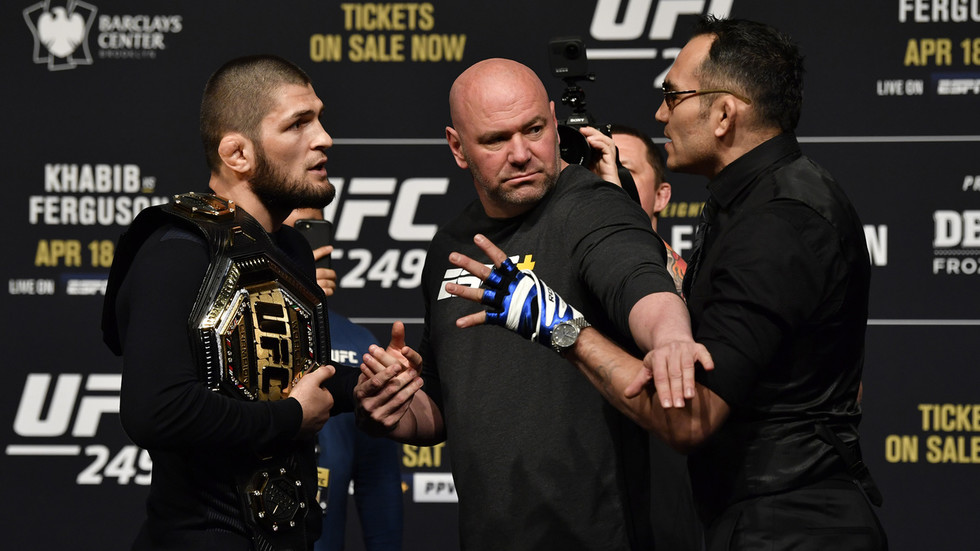 Grappling great Khabib Nurmagomedov might finally face off against Tony Ferguson in the UFC after accepting a challenge from the veteran.

Nurmagomedov retired from MMA in 2020 after beating Justin Gaethje and reaching a 29-0 record as the undisputed lightweight champion, with the only disappointment among some fans being the fact that he never took on generational rival Ferguson thanks to injuries and other issues that canceled their scheduled meetings on no fewer than five occasions.

Ferguson recently suggested that he and Khabib could take on one another as coaches on The Ultimate Fighter, however, without meeting in the octagon after as is custom, and the Russian has seemingly accepted the challenge.

“Tony I like the idea about TUF,” Nurmagomedov tweeted.

“Call your bosses and let them make an offer, but if they don’t have ideas, I myself will offer you a deal on the Eagle Fight Club platform. We doing some business here you know,” Nurmagomedov suggested, in relation to the rival promotion he owns.

Tony I like the idea about TUF, call your bosses and let them make an offer, but if they don’t have ideas, I myself will offer you a deal on the @EagleFightClub platform, we doing some business here you know.

“We can smell ya from all the way over here,” Ferguson wrote, with two pudding emojis.

“Lay off the sweets, meat head. Now you work for me,” Ferguson told his foe.

“By the way, you still me $200,000 and 20 push-ups for the homeless. Keep runnin’, it’s Tiramisu Tuesday, champ. ‘Merica, motherf*cker,” the former prospect signed off.

When originally issuing his challenge to Nurmagomedov, however, Ferguson was far more cordial.

We’re Private Contractors Fathead Remember? We Can Smell Ya 🍮🍮 From All The Way Over Here 🦨 Lay Of The Sweets Meat Head. Now🫵😎You Work For Me, BTW You Still Owe Me 200K & 20 Push-Up For The Homeless 🔱 Keep Runnin’ It’s Tiramisu🥇Tuesday- Champ 🖕😎 -CSO- 🇺🇸🏆🇲🇽 ‘Merica MF pic.twitter.com/LS9WK4rI12

“When his dad [Abdulmanap, who passed away from Covid complications in 2020] said we were supposed to compete, I believe that,” Ferguson revealed.

“I would love to be able to coach against him in The Ultimate Fighter, how about that? You know, best man wins on the team. I guarantee my coaching is a lot better than yours, Khabib. Not a lot of people understand that.”

“I built a team for a 12-fight win streak, and I can definitely build a team again,” he said about his impressive run from 2013 to 2019, which also took in the interim title.

“I have nothing personal against him, besides him running away for the pandemic and being a scared dude, but I gotta respect that family [comes] first…

“Jiu-jitsu, soccer, it doesn’t matter what game we play. It would be cool to go out there, shake the dude’s hand, squash some beef, and then move on,” Ferguson concluded.

Losing his last four outings, the window for Ferguson to become UFC undisputed champion seems to have closed, which might explain Nurmagomedov’s counter-invitation to follow in the footsteps of the likes of Junior dos Santos and Kevin Lee by joining Eagle FC.

Finished by Michael Chandler at UFC 274 in the second round of their meeting almost a fortnight ago, Ferguson has worryingly confessed to suffering memory loss after the KO of the year contending-kick that ended his evening.


“I took a big kick to the chin last Saturday inside that octagon,” Ferguson said.

“It knocked me out for a long time. It was a scary feeling not remembering anything from the start of the second round until I got to the ambulance,” Ferguson admitted.

“I’m not perfect by any means, but I will continue to strive for perfection in and out of the practice room,” Ferguson also said, batting off suggestions and rumors of hanging his gloves on.

“My movements are fine, my bones are intact and except for a slight headache in the mornings, I’m glad to be back and doing what I love. I want to be better than yesterday, not for anyone else but for me,” Ferguson stressed.