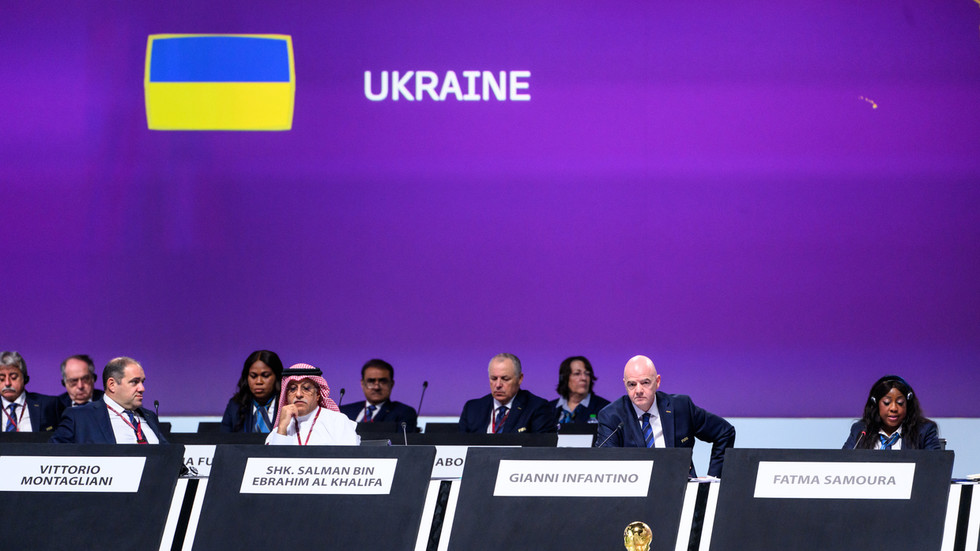 Ukraine’s ambassador to Qatar, Andrii Kuzmenko, suggested that the Russian Football Union (RFU) should be excluded as a member of FIFA during the global football governing body’s recent congress in Doha.

Kuzmenko attended the event held on in the Qatari capital on Thursday, and was quoted by Australian TV channel ABC via Al Jazeera as saying: “I think they [Russia] should be expelled from the organization.

“They have perpetrated crimes, they committed terror, they violated all the norms of civilization,” he added.

FIFA and UEFA have banned Russian teams and clubs from international competitions, meaning the Russian men’s national team was barred from attempting to qualify for the Qatar 2022 World Cup.

The Court of Arbitration for Sport (CAS) has thus far rejected the RFU’s appeals, although a final decision is still pending.


A Russian delegation still attended Thursday’s congress in Doha, and insisted they had every right to be there despite the sanctions imposed as a response to the military operation in Ukraine.

“I don’t find any clause in the FIFA statutes that were broken by Russian football.”

Fears in Russia had spread that the RFU could be kicked out of FIFA when officials and members discussed a congress agenda item titled “suspension or expulsion of a member association” at the congress.

As was later revealed, this pertained to the status of three other FIFA members – Pakistan, Zimbabwe, and Kenya.

The RFU’s membership was not raised, while a vote on including Russian as among the official FIFA languages was also passed without significant opposition.


In his press conference, FIFA boss Gianni Infantino confessed that the decision to ban Russian teams was not easy “because it’s about people who love football, like everywhere else.”

“But we had to take the decision, and now we have to look forward and hope that the hostilities can stop and we can bring a little bit of peace,” he added.

“Russia as a football union, like any other federation, has not been suspended as such by FIFA, and has been participating in this congress as well,” Infantino highlighted.

“If we don’t have occasions to bring people together like a congress, then we’d rather stop and go home,” he claimed.

While Kuzmenko attended the congress in person, Ukrainian Football Association president Andriy Pavelko appeared from Kiev via video link in a flak vest as men packed sandbags around a statue behind him.