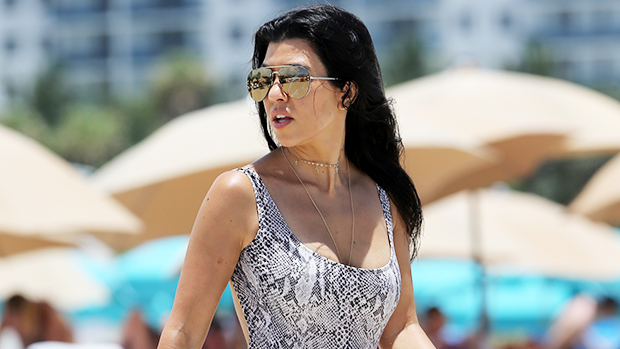 Kourtney Kardashian is living her best life. A few days after she spent her 43rd birthday at Disneyland with her fiancé Travis Barker and their kids, The Kardashians star enjoyed some much-needed alone time by the pool at home. Kourtney shared a photo to her Instagram Stories on April 21 of herself rocking a multi-colored two-piece bikini to soak up the sun in.

Kourtney positioned the camera in the air and snapped downwards to give her 172 million Instagram followers a perfect close-up glimpse at her poolside look. In addition to the sexy bikini, which showcased her slim figure, the mom-of-three also sported a chain necklace and a cross necklace around her necklace. Kourt applied just a bit of makeup and lipstick for the gorgeous snapshot.

The Poosh founder showed that 43 has never looked so good! Kourt’s been celebrating her birthday all week long, starting with a trip to The Happiest Place on Earth on April 18. She scoured the park with her future husband, his kids Landon, 18, Alabama, 16, and Atiana De La Hoya, 23, and her son Reign, 7.

Travis, who proposed to Kourtney in October after a little under one year of dating, shared the sweetest message to his fiancee on her birthday. “My best friend, my lover, my everything Happy Birthday @kourtneykardash I love you ♾,” he captioned his post, which included a black and white pic of the couple getting cozy. Kourtney wrote back to the rocker, “All I could ever dream of and more ♾.”

“Kravis” had an impromptu Las Vegas wedding ceremony on April 4, which led fans to believe the couple became husband and wife that night. However, Kourtney later clarified that they didn’t have a marriage license with them, so they’re still not legally married. The couple is also exploring IVF so they can have a baby together.

Celebrities With Coronavirus: See Who Has Had COVID-19