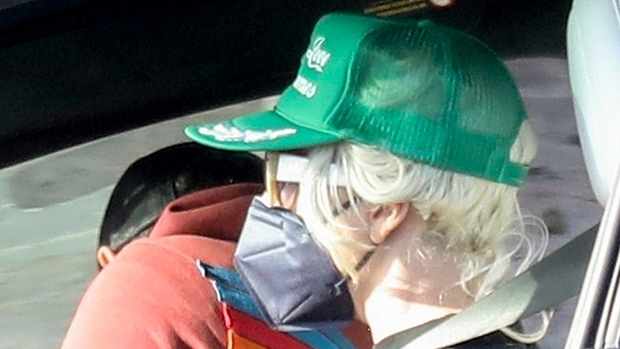 Lady Gaga stayed very low-key while she was out for a drive with her boyfriend Michael Polansky on Tuesday, May 10. The 36-year-old singer donned a bright green trucker hat, while her signature, bright blonde hair was styled very short. She also sported a pair of sunglasses and a black N95 face mask, while behind the wheel of her Tesla in Malibu.

While Gaga drove, Michael, 44, chilled in the passenger seat of the black Tesla. He wore a black baseball cap similar to the one that his girlfriend was wearing. He was also seen wearing an orange sweater as he reached over to get something in the car.

The Chromatica singer has been public about her relationship with the entrepreneur since February 2020. While they’ve been together for over 2 years, the pair still keep it low-key while they go out in public, but it’s clear that Michael is super supportive of Gaga, and she’s gushed about him in interviews, calling him her “whole life” in a November 2021 profile for The Hollywood Reporter.

Gaga isn’t the only one head over heels in the relationship. Michael sweetly showed his love for the singer when she was staying in Rome by sending her an extravagant flower display for her birthday in March 2021. The singer was clearly happy to receive the special surprise. She posted a photo of herself hugging the display to her Instagram. “When your bf sends you all the flowers in Rome for your birthday. I love you honey,” she wrote in the caption. “I can’t wait to be home with you and our dogs, that’s all I need.”

Besides her relationship, Lady Gaga has been gearing up for a huge, international summer tour! She kicks off the Chromatica Ball Stadium tour in Germany in July, and it’ll take her through a wide variety of country and cities, before she wraps it up in Los Angeles in September.

‘Dance Moms’ Stars: Where Are They Now?