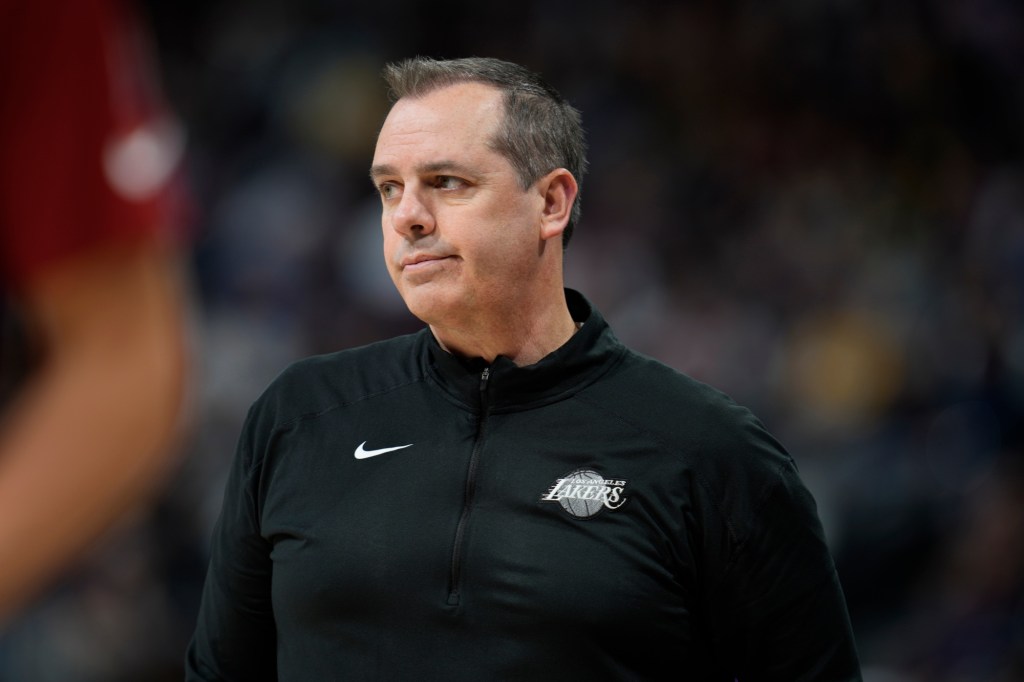 DENVER — As Frank Vogel walked off the court in the throes of a win, which has been too rare this season, the Lakers coach didn’t even get a chance to enjoy what might have been a bittersweet finish to the season.

ESPN was first to report moments after the Lakers 146-141 win over the Denver Nuggets that Vogel would be fired as soon as Monday, creating the surreal experience of a coach knowing he was facing the firing line coming out to talk about his final game.

But as he had so many times before, Vogel put on a smile after being thrust into an impossible situation.

Rumors of Vogel’s flagging job security have been circulating for months, and his dismissal was the widely expected outcome of a 33-49 season. Vogel finishes his Lakers tenure with a 127-98 record in the regular season, an 18-9 playoff record and the 2020 NBA championship.

Ultimately, the franchise couldn’t abide a 6-18 finish after the All-Star break. Even though injuries to Anthony Davis (42 missed games) and LeBron James (26 missed games) kept Vogel from leaning on the two stars who propelled him to the top, the Lakers still underwhelmed with critical key losses to teams such as San Antonio, Houston and New Orleans late in the schedule.

Without his two foundational pieces and only Talen Horton-Tucker back from last season, Vogel acknowledged throughout the year he found it challenging to school an entirely new group (though Dwight Howard, Avery Bradley and Rajon Rondo returned from the title team).

Trevor Ariza was originally envisioned as a starter alongside Davis, but an ankle injury discovered in training camp meant he didn’t debut until mid-December. Vogel responded by furiously flipping through different lineups, starting 41 different units and no one group more than seven times, which he defended Sunday night.

“It’s imperfect but that’s just the nature of our season,” he said. “Having guys in and out of the lineup all year long and we had 11 new players that basically had to audition for a starting job. And when we lost as much as we had, no one earned it on a regular basis.”

While this uncertainty grated on veterans, Carmelo Anthony was one notable defender of Vogel’s job performance. In his Sunday night exit interview, Anthony told reporters, “it was a very tough, tough situation for him.”

Part of the reason Vogel had so many lineups was because of COVID-19. In the middle of the season, a host of players missed time in the NBA’s protocols, and Vogel himself missed six games. COVID-19 influenced all three of Vogel’s seasons, from the championship played in the Bubble, to playing without fans in 2020-21, to the rash of protocol absences this season.

“And this year might have been the worst of all of it because the schedule kept going on and they were only testing certain teams that had one positive test,” he said. “And some teams were not getting tested, other teams were getting tested every day. And we got slammed for about a month. So it’s been disruptive.”

Over time, Vogel largely squeezed and benched his veterans, preferring to surround LeBron James and Anthony Davis with a younger cast like Malik Monk and Austin Reaves. Bazemore and Ellington weren’t in the rotation by the end of his tenure; Jordan and Ariza were waived, while Rondo was traded.

Searching for the right mix never ended, and never yielded the results Vogel hoped for. The Lakers ranked 23rd in offensive rating (109.7), but unlike most Vogel-coached teams couldn’t compensate on defense. The team was below average at 21st (112.7) in defensive rating.

Midseason losing streaks added heat to Vogel’s seat – he entered the season in a tenuous position with an extension that only put him under contract through 2023. He butted heads often with Russell Westbrook, particularly in four games when he chose to bench the 33-year-old former MVP rather than play him in close games.

At the same time, sources told SCNG that Vogel also stood up for Westbrook internally, going against others who wished to see the star’s role further reduced in the hopes that the fiery guard would find a rhythm late in the year.

From the very start of his tenure, Vogel had to put on a smile as dysfunction within the franchise festered. When the Lakers introduced him as their head coach, it was overshadowed by shots former executive Magic Johnson fired at Rob Pelinka on television. Vogel introduced L.A. to his sunny way of seeing the positives in dubious situations.

““There’s a positive vibe happening with our team right now,” he said. “There really is. OK? And it’s just one of those things where you’re going to have to wait and see.”

Vogel’s spin turned out to be correct: That year, the Lakers would go on to win the championship. But even as their fortunes crested downward, Vogel still claimed the team had optimism and belief.

Finally in April, as the Lakers’ fate to miss the postseason became clearer, even Vogel showed signs of strain: “It sucks we can’t get over the damn hump,” he said after a loss to Denver.

All season long, rumors that he would be dismissed swirled around Vogel, who some even within the organization viewed as a scapegoat for the entirety of the Lakers’ shortcomings. But even in those moments – such as when reports circulated that the Lakers strongly considered firing him in January – he still put on a brave face for the organization.

“It’s really not up to me whether (speculation is) fair or not, it comes with the territory, comes with being the Lakers coach,” he said in January. “We have high expectations, this fan base really cares, it’s a big market and I wouldn’t want it any other way, to be honest with you.”