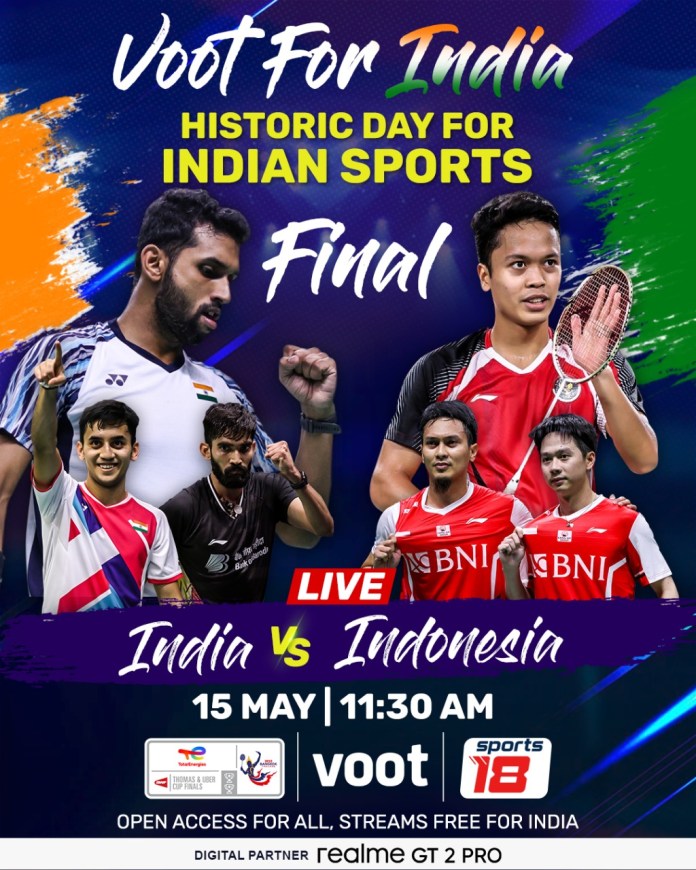 Thomas Cup Final LIVE – India vs Indonesia LIVE (1-0) – Lakshya beat Ginting:  India has taken 1-0 lead in the Thomas Cup Final vs Indonesia. After losing 1st game tamely to Anthony Sinisuka Ginting, Lakshya Sen cameback with a bang in 1ST Singles. Lakshya lost the 1st game 8-15 but came back strongly to win the next two by 21-17 & 21-16.  Follow InsideSport.IN for more updates.

India entered their maiden Thomas Cup final after defeating Denmark 3-2 in the semifinal. The tie was won in the final men’s singles contest, where HS Prannoy sealed a 13-21, 21-9, 21-12 victory over World No.13 Rasmus Gemke. Meanwhile, defending champions Indonesia won the semifinals against Japan by winning the contest 3-2.

Lakshya Sen will take on World No.5 Ginting in the first men’s singles clash of the tie. They met earlier this year in the German Open second round, with Lakshya winning the contest in straight sets. Lakshya Sen enters the contest after facing three consecutive losses in the tournament. Ginting meanwhile, lost his first three matches before clinching victories in the quarterfinal and the semifinal. The first match is expected to be a cracker of a contest.

Kidambi Srikanth will be up against World No.8 Jonatan Christie. Christie is having a terrific year having won the Swiss Open title and also finished as runner-up at Korea Open and Asia Championships. Christie has won three matches out of the four games he played in this tournament. He faced straight set defeat against Kenta Nishimoto in the semifinal.

Meanwhile, Srikanth has won all his games in the tournament so far and is in terrific form. Both the players met earlier this year in the semifinal of Swiss Open and also at Korea Open. Christie clinched vicrtories in both the matches.

HS Prannoy, will face World No.24 Shesar Rhutsavito in the third men’s singles contest. Prannoy is in a very good form at the moment as he is yet to face a single defeat in the tournament. He was the one who clinched the last game for India to help his team defeat Denmark and entered the finals. Meanwhile, Rhutsavito won all his four games in the tournament.

Chirag Shetty and Satwiksairaj Rankireddy, who won the Indian Open title this year will face World No.1 pair Kevin Sukamuljo and Mohammad Ahsan in the first men’s singles. The Indonesia duo played three games so far and won two matches. Meanwhile, the Indian duo has been in a good form winning the quarterfinal and the semifinal.

India’s Krishnaprasad Garaga and Vishnuvardhan Goud Panjala will face Fajar Alfian and  Muhammad Ardianto in the second men’s singles contest of the day. The Indian duo has so far played three games in the tournament and while they clinched a victory against Canada, they lost the quarterfinal as well as semifinals.

The match is scheduled to be played on 15th May.