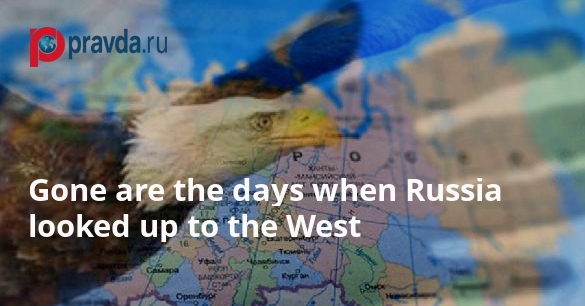 The West has not seen a prominent politician like Kissinger, Thatcher, Kohl or Mitterrand for years now. In matters of foreign policy, Russia has to deal with blinkered, aggressive and short-sighted individuals instead. The policies that they run are reminiscent of the theater of the absurd, and one needs to make incredible efforts to keep the world on the brink of a global catastrophe.

The West holds everything against Russia: no matter what kind of trouble happens in Western countries or in the world in general, Russia is always to blame. This has become such a familiar technique that such news is no longer surprising to anyone.

The US economy is bursting at the seams under the exorbitant burden of the national debt, wheres EU countries, with their overly ambitious Green Deal, suffer from an energy crisis, the influx of migrants from the East and the eternal tug of war between the Eurogrands and Young Europeans”. Western politicians arrange anti-Russian provocations, shifting the blame for their incapacity on the external enemy.

Having announced that US satellites detected military buildup in the Smolensk region, the United States and its allies in Europe accused Russia of unfriendly military activities on the border with Ukraine. The farfetched threat was enough to organize unscheduled NATO military exercises in the Black Sea with the participation of three US ships, tactical, patrol and strategic aircraft, as well as military personnel from Bulgaria, Turkey, Romania, Georgia and Ukraine. As a result, the potential danger of a military conflict was created by the reckless maneuvers of the NATO armada in the Black Sea off the coast of Russia, rather than by the Russian tanks stationed near Smolensk.


Poland’s provocative actions led to the accumulation of up to 3,000 Kurdish refugees from Iraq and other eastern countries on the border with Belarus. In violation of international conventions on the status of refugees, the Polish military used violence against all those displaced people who wanted to enter their territory from Belarus. European politicians, known for their fondness for human rights and their protection, praise the Polish authorities for those actions and promise military assistance to protect the borders of the European Union from asylum seekers – unarmed men, pregnant women and helpless children.

The level of cynicism of Western politicians has gone into overdrive. Having devastated Iraq, Afghanistan, Libya and Syria with their military incursions, they blame Belarusian “dictator” Alexander Lukashenko and his alleged Russian manipulator Vladimir Putin for the influx of refugees. US Secretary of State Anthony Blinken made a show of his cynical wit when he said that the migrant crisis in Belarus was an attempt that Lukashenko made to divert attention from Russia’s actions on the border with Ukraine. It appears that the head of the US State Department was practicing twisted madness, since there was absolutely no logic in his judgments.

The West has opened all fronts of the hybrid war against Russia – from brainwashing propaganda to the actual deployment of all types of troops in the vicinity of the Russian borders. The collapse of the USSR and the color revolutions successfully carried out in former Soviet republics have made Western politicians believe that they would only need to put just a little bit more pressure on Russia to cause it to collapse, like the USSR or Yugoslavia. In this case nothing will stop the West from materialising their long-cherished dream of conquering new living space in the East.

However, Russia turned out to be a hard nut to crack. The West risks losing a lot if it continues to persist in its stubborn policy. Western “pundits”, surprisingly to themselves, come to realize that Russia has armed itself with a national ideology and is using it to advance its interests in foreign policy. Russia’s increased activity in the international arena over the past ten years has sparked discussions among analysts about the role of ideology in its grand strategy, Ben Sohl, an expert with the Fletcher School of Law and Diplomacy believes.

When opposing ideological forces brought about political change in the region, the Kremlin viewed those turbulent events through the lens of foreign subversion, Ben Sohl believes. All the colored revolutions, including Euromaidan protests and the entire Arab Spring, carried out under the guise of democracy, took place as a result of information wars and the use of “soft power” by Western governments. Color revolutions take place in three stages: promoting Western values, forming a democratic front that recognizes the US leadership, and creating “controlled chaos” through protests.

The West has turned the much-hyped “democratic values” into a powerful weapon to advance its interests in the world, and Moscow has come to realize the need to formulate a state ideology comparable to Western democracy.


According to Ben Sohl, Russia and President Putin made traditional values the official ideology of the Russian state in opposition Western fake tolerance. Interestingly, Russia’s promotion of social conservatism attracts like-minded people in the West.


The recent two-week COP 26 UN Climate Change Conference in Glasgow has once again demonstrated the inability of Western politicians to separate their sticky fantasies from harsh reality. Hopes to gradually cease the use of coal in power generation evaporated completely and were not even mentioned in the final document – the Glasgow Climate Pact.


“I have been watching politics a long time now and I know when a tipping point is reached. Now not far off when it will be as politically unacceptable, anywhere in the world, to open a new coal-fired power station as it now is to get on an aeroplane and light a cigar.”


Alas, due to the fault of irresponsible politicians in the West, climate issues are also being used in  hybrid warfare. Russian Foreign Ministry spokeswoman Maria Zakharova was forced to urge the United States, the second largest producer of greenhouse gases in the world, to abjure unfounded attacks and work together with international partners to overcome the negative consequences of climate change.

High prices on electricity and fuel hit European consumers’ pockets considerably, and the situation may become even worse. Few sober people believe in carbon neutrality by 2050, suggesting a more realistic goal of switching to a low-carbon economy.