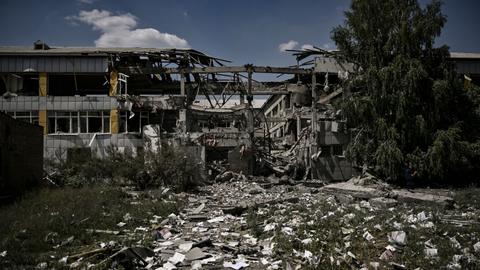 Russian forces are now largely in control of the key eastern Ukrainian city of Sievierodonetsk amid fierce fighting, now in its 106th day, as UN warns that the global impact of the Russian offensive is worsening.

Zelenskyy: Millions could starve because Russia is blockading ports

Millions of people could starve because of Russia’s blockade of Ukraine’s Black Sea ports, President Volodymyr Zelenskyy has said. Warning that the world was on the brink of a “terrible food crisis”, he said in a televised statement that Ukraine was unable to export wheat, corn, oil and other products.

He has earlier said Moscow’s aggression was responsible for a global grain crisis, dismissing Russian claims that Western sanctions on Moscow had sent prices soaring.

Russia also blames Ukraine for the situation over grain exports and cites sea mines planted by Kiev’s forces. On Wednesday, Russian Foreign Minister Sergey Lavrov said Moscow was ready to ensure the safe passage of vessels from Ukraine, amid concerns over grain stuck in Ukrainian ports.

Russian forces have increased their efforts to advance to the south of the town of Izium in eastern Ukraine, likely wanting to secure further options in the region, a British military update has said.

“Russia’s progress on the Izium axis had remained stalled since April, after Ukrainian forces made good use of the terrain to slow Russia’s advance,” Britain’s Ministry of Defence said.

“Russia likely seeks to regain momentum in this area in order to put further pressure on Sieverodonetsk, and to give it the option of advancing deeper into the Donetsk Oblast.”

Fighting is raging on the streets of Sievierodonetsk in eastern Ukraine and Russian forces are destroying “everything that can be used for defence”, the regional governor has said.

Luhansk Governor Serhiy Gaidai said Russia was shelling areas of the city that are still controlled by Ukraine but that Ukrainian forces would be able to “clean up” in the city once they received long-range artillery.

Despite the EU, the UK and the US ramping up sanctions, the Russian economy has shown surprising resilience, and defied predictions of a collapse pic.twitter.com/gHyk5KHa5o

Ukrainian fighters were holding out in the eastern city of Sievierodonetsk despite relentless Russian shelling, the regional governor said, as Moscow presses an assault that both sides believe could help shape the course of the offensive.

Russia has concentrated its troops and firepower on the small industrial city to secure the surrounding province on behalf of Moscow-backed separatists.

Ukraine’s forces pulled back to the city’s outskirts on Wednesday but have vowed to fight there for as long as possible. Artillery shelling has turned the city in Ukraine’s Luhansk province into a bombed-out wasteland.