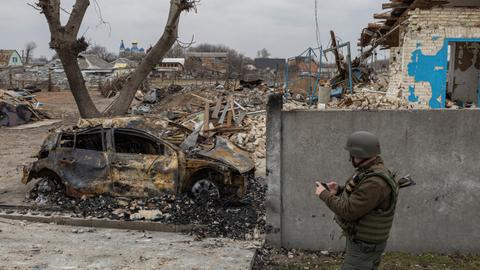 Russia has advanced its strikes to the western Ukrainian cities where the majority of the civilians have taken refuge as the conflict enters its 32nd day.

Russia is trying to split Ukraine in two to create a Moscow-controlled region after failing to take over the whole country, the head of Ukrainian military intelligence said.

“In fact, it is an attempt to create North and South Korea in Ukraine,” Kyrylo Budanov said in a statement, adding that Ukraine would soon launch guerrilla warfare in Russian-occupied territory.

Ankara and others must talk to Russia – presidential spokesman

Türkiye and other states must still talk to Russia to help end the offensive in Ukraine, Türkiye’s presidential spokesman said, adding that Kiev needed more support to defend itself.

“If everybody burns bridges with Russia then who is going to talk to them at the end of the day,” Ibrahim Kalin told the Doha international forum.

“Ukrainians need to be supported by every means possible so they can defend themselves … but the Russian case must be heard, one way or the other.”

“If everybody burns bridges with Russia then who is going to talk to them at the end of the day,” Türkiye’s presidential spokesman Ibrahim Kalin tells #DohaForum2022 pic.twitter.com/azhQNQVE1W

“I think that in the near future a referendum will be held on the territory of the republic,” Pasechnik said. “The people will exercise their ultimate constitutional right and express their opinion on joining the Russian Federation.”

Russia last month recognised Luhansk and Donetsk self-proclaimed republics as independent and ordered what it called a peacekeeping operation in the region shortly after.

US has no strategy of regime change in Russia – Blinken

“I think the president, the White House, made the point last night that, quite simply, President Putin cannot be empowered to wage war or engage in aggression against Ukraine or anyone else,” Blinken said during a visit to Jerusalem.

“As you know, and as you have heard us say repeatedly, we do not have a strategy of regime change in Russia – or anywhere else, for that matter.”

Russia hit a fuel depot being used by Ukrainian forces near Lviv with long-range missiles and used cruise missiles to strike a plant in the city being used to repair anti-aircraft systems, radar stations and sights for tanks, the ministry said.

“The armed forces of the Russian Federation continue offensive actions as part of the special military operation, ” the ministry’s spokesman Igor Konashenkov said in a statement.

The head of the International Monetary Fund is warning that the global economic strain caused by Russia’s offensive in Ukraine could stoke civil unrest in the Middle East and beyond.

Speaking at the Doha Forum in Qatar, Kristalina Georgieva said Russia’s offensive and the resulting sanctions on Moscow have forced the world’s poorest to bear the worst of the crisis as they grapple with inflated food costs and scarcer jobs.

Georgieva hinted that the current situation evoked the lead-up to the 2011 uprisings known as the Arab Spring, when skyrocketing bread prices fueled anti-government protests across the Middle East.

The Russian military appears to be trying to encircle Ukrainian forces fighting in the separatist regions in the eastern part of the country, Britain’s Ministry of Defence says.

Russian forces are advancing southward from the area around Kharkiv and north from Mariupol, the ministry said in an intelligence briefing.

Four missiles hit the outskirts of Lviv, just 60 km from the Polish border, local officials said. Another strike significantly damaged Lviv’s infrastructure but no deaths were reported from either attack.

Russia has started destroying Ukrainian fuel and food storage depots, meaning the government will have to disperse the stocks of both in the near future, Ukrainian Interior Ministry adviser Vadym Denysenko said.

Speaking on local television, Denysenko also said Russia was bringing forces to the Ukrainian border on rotation, and could make new attempts to advance in its offensive of Ukraine.

Traders have exported the first supplies of Ukrainian corn to Europe by train as the country’s seaports remain blocked due to the Russian operations, APK-Inform agriculture consultancy said.

Ukraine is a global major grain grower and exporter and almost all its exports have traditionally been shipped from its Black Sea ports. Monthly grain exports exceeded 5 million tonnes before the offensive.

Traders and agriculture official have said Ukraine, which still has significant volumes of grain in stock, may start exporting by train via its western border.

Ukraine has asked the International Committee of the Red Cross not to open a planned office in Russia’s Rostov-on-Don, saying it would legitimise Moscow’s “humanitarian corridors” and the abduction and forced deportation of Ukranians.

The head of the ICRC said earlier after his talks with Russian Foreign Minister Sergei Lavrov that an agreement between the Russian and Ukrainian armies was needed before civilians could be evacuated properly from Ukraine.

Ukraine’s nuclear watchdog says that a nuclear research facility in Kharkiv again has come under shelling by Russia and the fighting makes it impossible to assess the damage.

The State Nuclear Regulatory Inspectorate said that the neutron source experimental facility in the Kharkiv Institute of Physics and Technology came under fire.

Ukrainian authorities have previously reported that Russian shelling damaged buildings at the Kharkiv facility, but there has been no release of radiation.

Yuriy Fomichev said in a video message that city officials received a warning from Russian forces three days ago to surrender without a fight.

Noting they defended the city resolutely despite the warning, Fomichev said: “But Slavutych is under occupation as of today.”

“I have been released. Everything is fine, as far as it is possible under occupation,” Yuri Fomichev, mayor of Slavutych, told the AFP news agency by phone after officials in the Ukrainian capital Kiev announced earlier he had been detained.

Earlier, the military administration of the Kiev region, which covers Slavutych, announced that Russian troops had entered the town and occupied the municipal hospital.

US tech company Maxar Technologies has provided the latest satellite images after the Russian attack on the capital Kiev and encircling cities.

TV and radio tower at Izyum, a fuel depot in Kalynivka and buildings in Irpin and Horenka were destroyed in Russia’s attacks.

Ukrainian President Volodymyr Zelenskyy, visibly irritated, demanded Western nations provide a fraction of the military hardware in their stock piles and asked whether they were afraid of Moscow.

Ukraine needed just 1 percent of NATO’s aircraft and 1 percent of its tanks and would not ask for more, he said.

“We’ve already been waiting 31 days. Who is in charge of the Euro-Atlantic community? Is it really still Moscow, because of intimidation?” he added.

Russian sanctions can be lifted with conditions — UK

British Foreign Secretary Liz Truss has said that UK sanctions against Russia over its aggression on Ukraine could be lifted if Moscow committed to a full ceasefire and withdrew its troops.

“Sanctions should only come off with a full ceasefire and withdrawal, but also commitments that there will be no further aggression,” Truss told the Sunday Telegraph.

“And also, there’s the opportunity to have snapback sanctions if there is further aggression in future.”