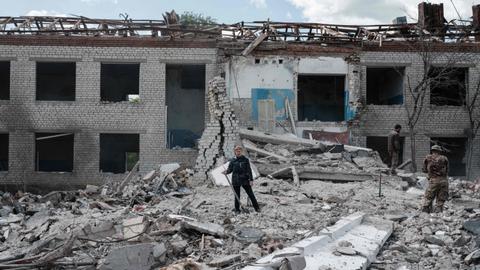 Ukrainian forces holed up in the last stronghold in the besieged port of Mariupol continue to evacuate and appear to cede control of the city to Russia after months of bombardment as the conflict enters its 83rd day.

Russian strikes targeting a village in north Ukraine where a military base is located have at least left eight people dead and 12 more injured, according to a local official.

Spokesperson for the Chernigiv region’s emergency services, Oleksandr Ivchenko, said “eight people were killed and 12 were injured” during the Russian attack on the village of Desna.

The Chernigiv region’s governor earlier on Tuesday had announced what he described as missile strikes on Desna, saying, “the war is not over”.

Kiev says that peace talks to end fighting with Russia in Ukraine had been suspended and blamed Moscow for failing to find areas for compromise.

“The negotiation process is on hold,” Mykhaylo Podolyak, a presidential aide was cited as saying in a statement issued by the presidency.

Podolyak, who is also Kiev’s lead negotiator in talks with Russia’s delegation, said Moscow was blind to its “extremely negative” role in the world.

Italian energy giant Eni has said it was opening accounts in euros and in rubles with Gazprombank to fulfil payments due imminently for the supply of Russian gas, thus complying to Moscow’s demands.

“The payment obligation can be fulfilled with the transfer of euros,” it said in a statement, adding that the new procedure was “not incompatible with the existing sanctions” imposed on Russia by the EU over its attacks on Ukraine.

Ukrainian President Volodymyr Zelenskyy says he had a “long and meaningful” phone conversation with French President Emmanuel Macron about the conflict in Ukraine.

“Told about the course of hostilities, the operation to rescue the military from Azovstal and the vision of the prospects of the negotiation process. Raised the issue of fuel supply to Ukraine,” Zelenskyy said on Twitter.

We also discussed defense support from France, preparation of the 6th package of sanctions, possible ways to export Ukrainian agricultural products. Held a substantive discussion of our application for the status of a candidate for EU membership. (2/2)

Members of the US House intelligence committee has sent a letter to Meta CEO Mark Zuckerberg this week asking Facebook to address what it called pro-Russian disinformation on the company’s platforms in Slovakia, the committee said in a statement.

Finland and Sweden will submit their bids to join NATO together on Wednesday, the two Nordic countries announced.

“I’m happy we have taken the same path and we can do it together,” Swedish Prime Minister Magdalena Andersson said during a joint press conference with Finnish President Sauli Niinisto.

Türkiye says Sweden and Finland act as a hotbed for terrorist groups and President Recep Tayyip Erdogan insists Ankara will not approve expansion.

The total sum of the Russian fines to the broadcaster for not deleting some “banned content,” including about what Moscow calls a “special military operation” in Ukraine, reached 55.8 million roubles, RIA added, citing the court.

The European Union’s top diplomat Josep Borrell has said that if numbers and reports are true, the Russian army has suffered “impressive losses” while attacking Ukraine.

“I wouldn’t dare to make a hypothesis about how long Russia can resist… If it is true that Russia has lost 15 percent of their troops since the beginning of the war, this is a world record of the losses of an army invading a country,” said EU foreign policy chief Josep Borrell.

ICC sends ‘largest ever’ team of investigators to Ukraine

The International Criminal Court has deployed a team of 42 investigators, forensic experts and support staff to Ukraine to probe “war crimes” and crimes against humanity.

“This represents the largest ever single field deployment by my office since its establishment,” ICC prosecutor Karim Khan said in a statement.

G7 finance ministers plan 15.8B euros in aid for Ukraine

The finance ministers of the Group of Seven economic powers want to put together a $15.80 billion aid package for Ukraine at their meeting in Bonn this week, a senior German government official has said.

The package would cover three months, with a short-term financing arrangement mainly in the form of grants, which unlike loans do not have to be repaid, the official said, adding that the aid was needed because Ukraine’s revenues have collapsed.

The United States had already offered to contribute half of the aid in the form of grants worth $7.5 billion, the official added, adding that the G7 ministers wanted to agree a joint communique at their meeting.

Lawmakers in Finland have voted overwhelmingly in favour of joining NATO as a deterrent against Russian aggression, paving the way for an application to be submitted in the coming days.

A total of 188 of 200 members of parliament voted in favour of NATO membership, a dramatic turnaround from Finland’s military non-alignment policy dating back more than 75 years.

End of siege: Soldiers in Azovstal plant, Ukraine’s last stronghold in Mariupol, are being evacuated after holding up against Russian blitz for nearly a month as negotiations for remaining Azov troops continue.

Swipe to see how Mariupol became a symbol of Ukrainian resistance

US President Joe Biden will host the leaders of Sweden and Finland at the White House to discuss their NATO applications on Thursday.

Putin: Impossible for some EU countries to ditch Russian oil

President Vladimir Putin has said on that it was impossible for some European countries, which are heavily reliant on energy from Russia, to completely shun Russian oil.

Speaking at a televised meeting with domestic oil managers and government officials, Putin also said that Western sanctions and a possible embargo on Russian oil had resulted in an increase in global oil prices.

– Some EU states will not be able to completely ditch Russian oil
– Western sanctions and possible embargo have led to rise in oil prices
– European economy activity will subside
– Russian oil and gas revenues are on the rise pic.twitter.com/mRb2KsPW0B

US Treasury Secretary Janet Yellen has urged the European Union and other partners to increase financial support for Ukraine.

Speaking at the Brussels Economic Forum, Yellen said the US and its international partners including the EU “need to extend our cooperation to boosting support for Ukraine.”

The defenders of the Ukrainian city of Mariupol changed the course of the conflict with Russia by holding out for 82 days, Ukrainian presidential adviser Mykhailo Podolyak said on Tuesday.

Podolyak said in televised comments that talks on evacuating more people from the city’s Azovstal steel works, the last bastion of defence after weeks of Russian siege and bombardment, were difficult but that there was hope they would be successful.

“Over the past 24 hours, 265 militants laid down their arms and surrendered, including 51 heavily wounded,” the ministry said in a briefing.

It added that those in need of medical care were transferred to a hospital in the town of Novoazovsk.

Hundreds of Ukrainian fighters defending the last holdout in Mariupol were evacuated to areas controlled by Russian-backed separatists and officials worked to get the rest out, signalling the beginning of the end of a siege.

Russia called the operation a mass surrender. The Ukrainians avoided using that word – but said the garrison had completed its mission.

Moscow said that two employees of Finland’s embassy in Russia will have to leave the country in response to a similar move by Helsinki.

The foreign ministry said in a statement that it summoned Finland’s ambassador to Moscow and expressed its “strong protest” against the expulsion of two Russian diplomats from neighbouring Finland in April.

It also accused Finland of taking a “confrontational course” towards Russia, supplying weapons to Ukraine and “covering up the crimes of Ukrainian nationalists” against civilians.

The Kremlin contended that Russia will win the “hybrid war” with Ukraine and the West, and will achieve all its goals.

“We are sure that everything will be fine, and we are sure that we will win, we will achieve all the goals,” spokesman Dmitry Peskov said at the educational marathon conference New Horizons in Moscow.

Russia, he said, is fighting in a war not only with Ukraine but also with the US and other Western countries.

Russia has eased safety standards for cars produced on its territory – such as dropping the requirement for airbags – after Western sanctions over Ukraine caused a shortage of electronic components and car parts.

In a decree signed on May 12, the Russian government announced a list of reduced requirements to certify some types of new vehicles produced in the country. It includes the production of cars without Anti-Lock Braking System (ABS) sensors, airbags or Emergency Locking Retractors (ELR) for seatbelts.

Russian troops have shelled a military facility in Yavoriv district in western Ukraine’s Lviv region not far from the border with Poland.

In a post on his Telegram channel, Maxim Kozitsky, head of the Lviv regional administration, said that the region’s air defence was activated during the attack. Detailed information about the incident will be given later in the day.

The mayor of Lviv, Andriy Sadovyi, also called on citizens to be aware of air raid sirens and to protect themselves.

A village in Russia’s western province of Kursk bordering Ukraine came under Ukrainian fire, regional governor Roman Starovoit said, but there were no injuries, although three houses and a school were hit.

Rescue mission under way at Azovstal as hundreds evacuated

Ukrainian authorities said a rescue mission to extract the last defenders of the Azovstal steelworks in Mariupol was under way, after hundreds of soldiers were evacuated in an earlier operation.

More than 260 fighters were evacuated through humanitarian corridors to areas under Russian and Moscow-backed separatists’ control, with Ukraine’s defence ministry saying a further “exchange procedure” would take place later.

“As for the defenders who still remain on the territory of Azovstal, all necessary rescue measures are being taken by our state,” the ministry said in a Telegram message.

Ukraine’s military command has said that the mission to defend the besieged Azovstal steel plant by “the heroes of our time” in the strategic southern port of Mariupol is over and pledged to rescue servicemen still trapped inside.

“The ‘Mariupol’ garrison has fulfilled its combat mission,” the General Staff of Ukraine’s Armed Forces said in a statement early on Tuesday. “The supreme military command ordered the commanders of the units stationed at Azovstal to save the lives of the personnel… Defenders of Mariupol are the heroes of our time.”

A total of 53 injured servicemen were evacuated to a hospital in Novoazovsk, east of Mariupol, and a further 211 were taken to another point, Ukraine’s deputy defence minister said.

The head of the world’s largest humanitarian network has said that Europe’s speedy acceptance of millions of Ukrainians fleeing Russia’s aggression demonstrates its “double standard” in dealing with people fleeing violence in Africa, the Middle East and elsewhere who cross the Mediterranean Sea and are not welcomed.

Francesco Rocca, president of the International Federation of Red Cross and Red Crescent Societies (IFRC), told a news conference he doesn’t think there is any difference between someone fleeing eastern Ukraine’s Donbass region and someone escaping from the Boko Haram group in Nigeria.

“Those who are fleeing violence, those who are seeking protection, should be treated equally,” said Rocca, adding that “we hoped that the Ukrainian crisis would have been a turning point in the European migration policies. But unfortunately, this was not the case.” More than 6 million people have fled Ukraine and been welcomed with “open arms” by European neighbours.