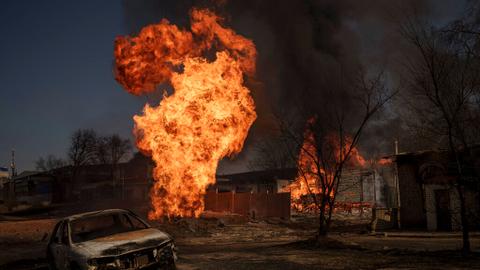 Russian forces in Ukraine appear to have shifted their focus from a ground offensive aimed at Kiev to instead prioritising what Moscow calls the liberation of the contested Donbass region as the conflict enters into the second month.

Most of the companies that are expected to come under the reported sanctions — including Serniya Engineering and equipment maker Sertal — were earlier added to a US list banning exports of sensitive technologies to them, according to the report.

Crude prices were higher and stock markets made decent gains after European countries decided against a ban on Russian oil imports over its assault of Ukraine — but Germany said it would slash its energy purchases from Moscow.

European stocks, which had been firmly higher earlier in the session, ended the day with only modest gains, but on Wall Street the Dow and S&P 500 climbed out of a midday slump to both gain under one percent at the close.

“It seems the skyrocketing move higher with commodity prices has taken a break and that has allowed investors a chance to pile back into equities,” said Edward Moya of OANDA.

However, analysts say instability in the prices of commodities such as oil were keeping markets volatile, while investors will remain cautious over the economic impact of the conflict in Ukraine, now entering its second month.

Germany’s SWR Symphony Orchestra has said it would keep working with Greek-Russian conductor Teodor Currentzis despite his “problematic” ties to a Russian bank hit by sanctions over the assault in Ukraine.

The Stuttgart-based SWR radio orchestra said a European tour starting March 27 would go ahead as planned but the programme would be changed to feature Russian, German and Ukrainian composers in “an appeal for peace and reconciliation”.

Leading Russian artists working abroad have faced pressure to publicly denounce Russia’s attack, or risk losing their jobs. Currentzis, who has been chief conductor of the SWR orchestra since 2018, has not spoken out against Putin.