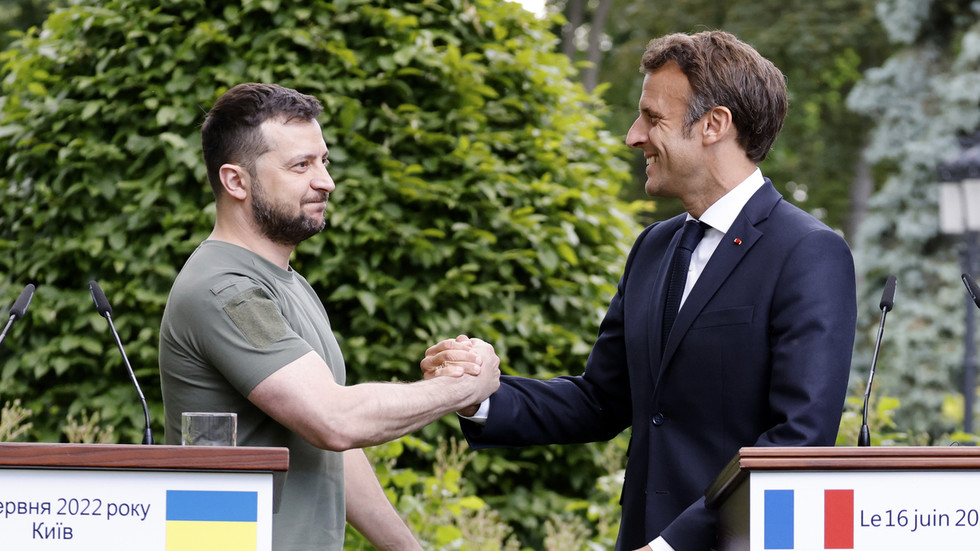 French President Emmanuel Macron did not support the proposal of his Ukrainian counterpart Volodymyr Zelensky to designate Russia a “sponsor of terrorism,” explaining that Paris doesn’t need any “definitions” to sanction Moscow or condemn its alleged “war crimes.”

On Monday, Zelensky claimed that “the Russian state had become the largest terrorist organization in the world.” “And this must be a legal fact,” the Ukrainian president wrote on Telegram.

Commenting on Zelensky’s statement during a press conference on Tuesday, Macron said that his country does not follow such “methodology” and has been consistent in its approach to Russian “war crimes.” Referring to the alleged murder of civilians in the city of Bucha by Russian forces (something that Moscow vehemently denies), Macron stated that “these are war crimes.” He stressed that Paris condemns them and supports investigations that will eventually bring those responsible for the atrocities to “Ukrainian and international justice.”


Moreover, France does not need any judicial definitions for sanctioning Russia, Macron claimed.

“We sanction Russia and we do not need any definitions to carry out these sanctions,” the French leader said.

He added that as “Russia cannot and should not win” in the conflict, France and its allies will continue to impose restrictions on Moscow and to support Ukraine, both economically and militarily, for as long as will be necessary. According to Macron, the goal is to ensure that Kiev can negotiate with Russia “on its terms and at the moment it chooses.”

Macron has consistently refused to use judicial terms for describing the situation in Ukraine. In April, he said that he would not use the word ‘genocide’ to describe Russia’s conduct in Ukraine, explaining that “the word ‘genocide’ must be qualified by jurists, not by politicians.”

Zelensky, meanwhile, claimed that everyone in the world should know that “buying or transporting Russian oil, maintaining contacts with Russian banks, paying taxes and customs duties to the Russian state means giving money to terrorists.”

Since the launch of the Russian military offensive in Ukraine, Moscow and Kiev have been accusing each other of targeting civilians and committing other war crimes. On Monday, Ukraine claimed Russia attacked a shopping center in the city of Kremenchug, killing and injuring many civilians. The Russian military responded that it had targeted a stockpile of Western weapons but that the detonation of the munitions caused damage to a nearby shopping mall, which, according to Moscow, was non-functioning.